Good morning fellow gamers! (Or whatever time you happen to be reading this.) My name is Adam, and welcome to my blog. This is the penultimate entry in my month-long series detailing some of the "hidden gem" video games I've played over my lifetime. I'd like to start this with a little disclaimer. If you've been reading these, you might know that I had surgery on my arm earlier this month that I'm still recovering from. I feel a lot better, but there is still some discomfort in my wrist, too much discomfort to use a regular mouse to make the banners that I've been using. I made most of the operation, hence why you've still been seeing them, but I don't have one for this entry. That's why the only visuals you're going to see here are the promotional screenshots. Sorry! 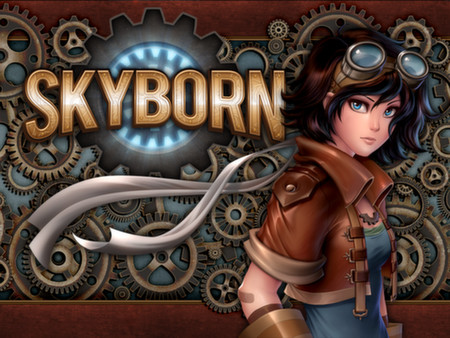 There's a phrase, "don't judge a book by it's cover," that we as gamers should probably adapt ourselves: "don't judge a game by its free game engine." Don't we, though? I know for me, whenever I hear of a game being developed in something like Unity, I can't help rolling my eyes a little. Because it's very readily available to the public, as are a smorgasbord of assets that people can use. Thus amateur developers have made games from that engine a dime a dozen. It also kind of feels too easy. Like anybody could make a game on that thing, so why pay money for it?

RPG Maker is another example of this. There are tons of RPG Maker games out there, even for sale on Steam. Not all of them are bad (To The Moon is one of the best games I've ever played) but many of them are cheap drivel. Having played with the program myself, the idea that these games just dragged-and-dropped assets into menus and popped something out through a formula makes them even less appealing. And yet, it isn't fair to dismiss a game just because it was made on RPG Maker. Skyborn is one of those games for me. I got it in a bundle a while back, and while it wasn't a masterpiece or anything, I liked it enough to hold it in the back of my mind to talk about some day. 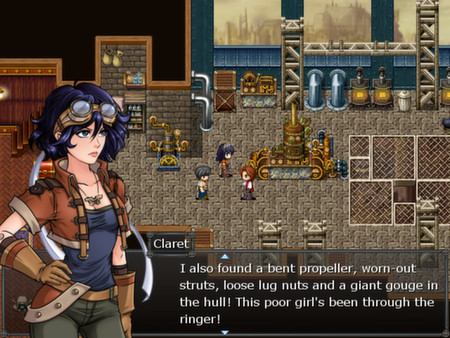 It's a steampunk world full of airships, magic, and guns. Humanity has been oppressed following a great war with the Skyborn, a race of winged mages who pride themselves on their violent idealogy. Mankind now lives as laborers in slums while their savage overlords gloat over them. Claret Spencer is one of the more fortunate humans: she lives with her brother, working at their airship repair shop. It's a good enough life for her. That is, until a rich jerk shows up with plans to buy the shop out from under them. Now Claret is determined to steal an airship and strike out on her own, but it isn't long before those plans find her entangled in the affairs of a rebellion looking to overthrow the oppression of the Skyborn.

The game is nice to look at. I don't know how much of the assets are custom and how many came with the software, but it all flows pretty seemlessly. The character art stands out the most. So much so that I wish more characters had gotten portraits just so I could look at the drawings some more. Music is pretty well done, too.

Being an RPG, of the course the story is an important part, which I had fun with. It sure beats the standard fantasy "collect the magic stones to save the world from the monster" plot. It instead involves political intrigue and interpersonal conflict. The pacing does tend to slow down a couple times while you're exploring but it isn't a big deal. The game's dry patches aren't enough to make me not like it.

Of course, every RPG has combat. Skyborn tries to make its battles a little more than your standard RPG Maker fair. Does it succeed in that? Eeeehhhhh I don't know. Not really. It includes a few little touches like a weapon augment system, branching character classes, and a "threat" system that allows you to manipulate aggro. Some characters are built around buffs, debuffs, and threat. Most of this is pretty unnecessary. You can adjust the difficulty, so maybe on hard mode this kind of strategy becomes a little more important. For me on the standard settings, though, the fighting basically boiled down to the usual stuff for all but a couple of the bosses. Pick the strongest spell and kill the enemy as fast as you can, then move on. 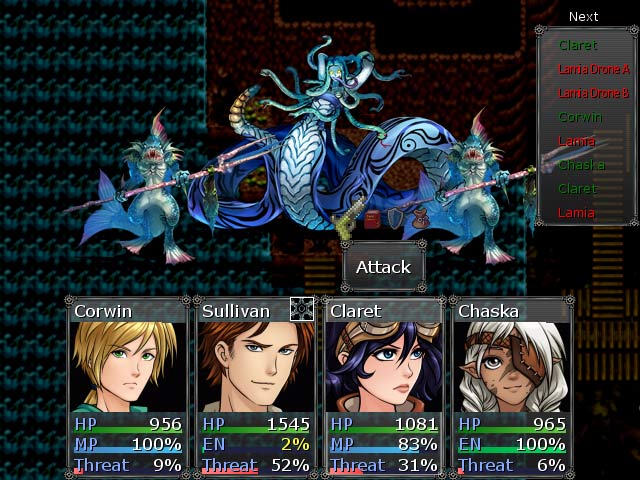 Skyborn isn't a perfect game. It certainly isn't the best RPG in this blog series. It isn't even the best RPG Maker game in this blog series (come back tomorrow for more on that!) If this were made by a AAA developer, I wouldn't even be giving it the time of day. But it isn't. It's a small indie game made on a publicly available game engine that manages to be just good enough to stand out from the white noise of its brethren. For that alone, it's worth talking about.

Unfortunately, it's standard $15 price point on Steam makes it hard to recommend. Partly because of its RPG Maker nature, partly because of its quality, and partly because it's kind of short (~7 hours.) However, during the most recent autumn sale, it dropped to $3.75, which is probably worth it if you like this kind of thing. It might not blow you away, but Skyborn is still a decent title for what it is. 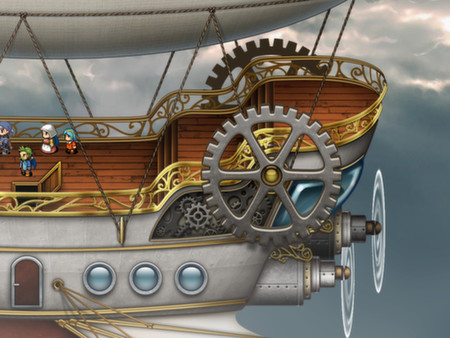