Thanks to everyone who has been reading this blog series so far. I appreciate everybody who has been commenting. The reason I haven't been replying back very much is because fate's birthday gift to me was a terrible arm injury that requires surgery. Yay, just what I wanted! I'm so excited at the prospect of spending my birthday and the entire holiday season in an arm brace! At least I'll have time to catch up on my gaming, since I won't be able to do anything else for a few weeks. So thanks again for reading and I'm very sorry that I haven't been very communicative.

If this is your first time reading this, welcome! November is the month that I turn 30, so in honor of my thirtieth birthday, I've been writing this blog series documenting some of the hidden gems that I've played over the years. Today is number sixteen. If you want to start at the beginning, check it out here.

In researching this post, I think I may have stumbled across something I never realized before. The classic Namco arcade game might have been exclusive to Japan. Where I played it, and probably most other people as well, was on the PS1 release of Namco Museum Volume 1. I played it fairly often, and for a while it was my favorite game on the disc.
You play as either Pinocchio (“Pino”) or Acha (if doing coop) battling through a series of toy-themed rooms. Each room contains a locked door that can only be open by hearts that are freed by shooting bottles. Each room contains a heaping helping of gift boxes that you have to destroy to make your way around. These gifts can contain powerups and alternate weapons, but can also contain traps as well. The rooms are also swarming with hostile toys, many of which can only be defeated using a specific weapon.
While it’s okay on its own, you get the most fun while playing with a friend. Unfortunately, as far as I can tell, you only way to obtain the game in the west (besides an emulator) is on the Namco Museum disc for the PS1. I guess this probably makes it kind of rare, which stinks because it’s a lot of fun to play. 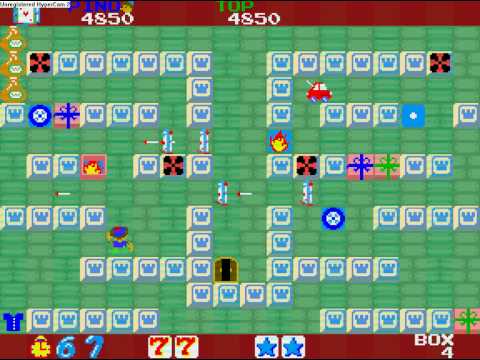 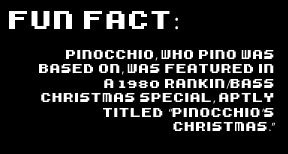