'Tis the Season: Santa Claus is Gunning You Down (Bloggers Wanted)

Season's Greetings! I hope you're all enjoying a wonderful holiday season. I know I'm enjoying the ho-ho-heck out of all my favorite traditions. And I have a lot of them. One of those traditions is gaming. There are plenty of games that I associate with Christmas, but in most cases, that's because I either got them for Christmas or first played them around the holidays. It's rare to find a game with a Christmas theme that extends beyond a one off level.

There is a small, elite group a games that fall under both categories for me. One of those is Kirby's Epic Yarn, a game I got the year it came out. I remember playing the ice-themed level Cozy Cabin a few days after Christmas. Early on, there is a point where you can make collectible gems appear. They line up with the pine tree in the background, making it look like Christmas ornaments. That one moment made me far more excited than any grown adult should be.

There's also PAM: Post Apocalyptic Mayhem, a game I wrote about recently. I played that one December night right before going to Christmas party at the bowling alley. I was blown away by its fast paced, adrenaline-pumping action. It was quite atmospheric to blitz through the north pole level while snow flurried out my window.

If you're not familiar with Killing Floor, it's an FPS on Steam where you try to survive against hordes of zombie-like mutants. At the time of its release, it drew comparisons to Left 4 Dead, though it's actually more like zombie mode on Call of Duty. You face off against ten waves of increasingly difficult monsters before going face to face with the head honcho, named The Patriarch. The game had a pretty strong cult following for a while. It has since been mostly overshadowed by the sequel, which released two years ago, but the original still has a few people playing.

I first played the game in 2011, two years after its release. It was coming up on Christmas and I needed to get my brother a present. I decided to get him a Steam game, and was tossing around a few ideas for games that he said he wanted. At this time, I noticed a friend of his (who we were both friends with on Steam) was playing Killing Floor quite a bit. I didn't know much about this game, but it looked cool, and I thought it would be neat to get him a game that he could play with his friend, so I took a chance on it. I still wanted him to have something physical to open for me, so I printed a picture of the cover art, taped it to a piece of carboard, folded that cardboard into a weird shape, then taped it to a package of Reese's Peanut Butter cups, before wrapping the whole bundle.

He thought it was cool, and was glad to have something to play with his friend. In researching the game, I took an interest in it myself. It seemed fun, and I like playing games with my brother, so after seeing him enjoy it for a few days, I bought it for myself. I'll never forget the first time I played it. The three of us - myself, my brother, and our friend - booted up a game one evening and I entered into one of the most exciting play sessions of my life. My brother and I didn't really know the meta game very well. We just desperately, excitedly fired away at the increasing swarms of fiends trying to rip our guts out. We played in on a map called Crash, a series of warehouses connected by a snowy outdoor area. We found ourselves outside, backed against a fence, making a stand against our enemies. It was exhilarating. We lost around wave eight or nine; not bad for a first try. I especially remember the fear in our friend as he ordered us, "Crap! Kill that giant nutcracker, quick!"

Wait, giant nutcracker? Yup! This is a Christmas blog, after all. One of the cool things about Killing Floor was its events. A couple times a year, the game would be updated to follow a certain theme. This usually meant some new DLC, a new map, and re-skinned enemies. Summer events usually followed a circus theme. Halloween was a wild card, it could be anything. Then there was the annual Christmas even, lasting most of December until a couple weeks after New Years.

Since my brother and I first played the game at Christmas, this event was still going on when we first got into it. My first experience with Killing Floor was in the middle of its holiday dressing. I didn't even know what the enemies actually looked like for two or three weeks after I started playing. I have to admit, I was even a little disappointed. The pallid goblins didn't have the same flair as the demented snowmen and giant gingerbread men.

I think one of my favorite aspects of the Christmas events was the music. Typically the game featured an industrial metal soundtrack, like the boss theme, Abandon All. The Christmas maps (Ice Cave and Santa's Workshop) had an altered score. It took its tunes from The Nutcracker. In the break between rounds, you would stock up while "Dance of the Sugar Plum Fairy" played. Then as soon as action started again, it would launch into a lively rendition of the "Russian Trepak." Setting action in Christmas movies to that piece may be cliche, but when you're turning evil creatures into a bloodbath, it's kind of hilarious.

My brother and I would go on to play Killing Floor for several years. We would play with our friend, other friends, and even make new friends playing it. We built up our skills and built up our perks. Once I learned the ins and outs of the game, I could play more strategically, eliminating some of the frantic action of that first play session. That's not to say that it was never as fun, just different. And of course, every winter we would have to log on to target practice some elves and reindeer. It's a fun game, action packed and full of violence and gore, if you're in to that kind of thing. There's something grimly satisfying about watching an enemy's head explode like a pimple.

Anyway, that's all behind us now. I still have the game on my computer and I still go for a play session every few months or so. I haven't played with my brother in a couple years, and our friends were out of it even longer than that. There hasn't been an in-game event since the release of the sequel two years ago. Occasionally you can luck into a modded server that features the Christmas skins for enemies. Mostly, though, the only remnant of the Christmas event is the couple of holiday maps. At least they still have the music.

Typing this up, it feels weird to get nostalgic for a game that came out after I had already graduated high school. It's hard to believe that this game is nine years old. Oh well, I mean, I did just turn 30 after all. Time really does go by, and when it gets to be this time of year, I always get the urge to relive a certain Christmas romp through the blood soaked annals of Killing Floor. 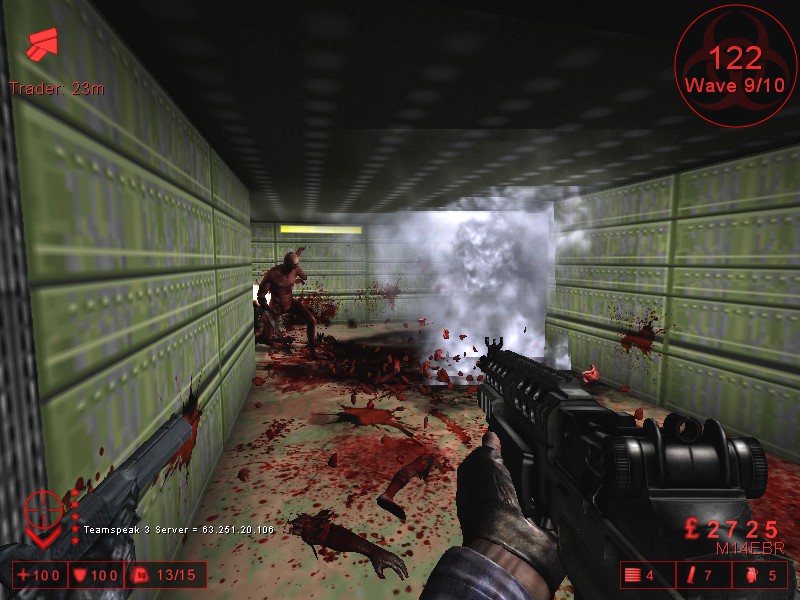