When did it become unacceptable to enjoy videogames?

7:54 PM on 09.12.2010 (server time)    0
As I lazily flicked through gaming magazines from years past in front of tonight's Keeping Up with the Kardashians, I came to two realisations. The first was that I would pick Khlo� over Kim or Kourtney. The second was that I miss the days when it was okay to say you love a videogame.

This actually first struck me one month ago, when I wrote my preview of Enslaved: Odyssey to the West. If messages around Destructoid, posts on GameFAQs, messages sent to me on Xbox Live and several people who spoke to me about it at Eurogamer Expo this past weekend are to be believed, I "jumped on the hype train", what I wrote was "ridiculously glowing", I "must have been paid off by Namco" and I "should write more objectively". Yes, these are all genuine complaints that various people have had with my preview article. According to one clearly very intelligent chap, I "can't get enough of Namco's jizz" (thanks, Xbox Live. I knew there was a reason why I keep paying for you). Apparently it was incorrect of me to have an opinion about a videogame. God help me, it was even a positive opinion.

Of course I'm not the first person to come under fire in this way. Jim Sterling has often been on the receiving end of much hate because, apparently, people expect purely objective reviews.

I just don't understand where and when this mentality began. Must we all be apathetic towards every videogame that is released? What is even the point of playing videogames if we can't be excited by them? 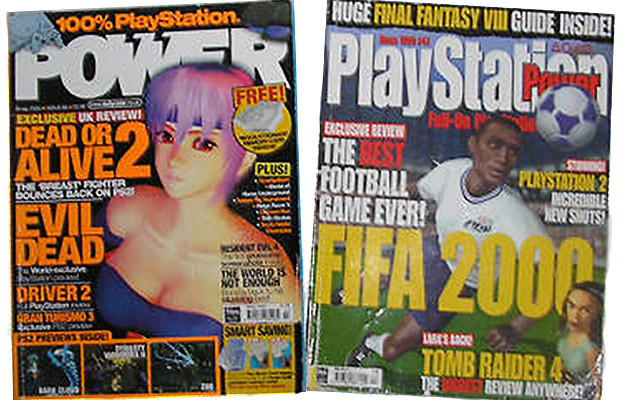 A little under a decade ago, the Christmas 2000 edition of Playstation Power - or just Power, as it had become rebranded by then - was published. Playstation Power was a large but ultimately independent Playstation magazine. It was one of the few Playstation magazines which wasn't afraid to call Sony out on their bullshit when need be, its staff were happy to praise the Nintendo, Sega and Microsoft systems and it was sold on its personality rather than Official Magazine-style polish. In many ways it was the Destructoid of the time; you bought it because you liked its writers, you bought it because you were passionate about videogames and so were they.

This particular issue of Power was mostly dedicated to the game Dead Or Alive 2: Hardcore. One of the game's characters, Ayane, graced the front cover and the review of the game was given three whole pages. Meanwhile, Tekken Tag Tournament - which was much more of a "triple-A" title than DOA was - was given merely one page.

Were the staff of Power on Tecmo's payroll? No, although they got the exclusive review they were still an independent publication and even slagged off other Tecmo games within the same issue. Were the staff of Power big Dead Or Alive fans, did they have some kind of "Tekken BIAS" as many people on blogs these days are want to scream? Not at all, Power had previously slated the first Dead Or Alive game and they ranked Tekken 3 as one of their top 5 beat 'em up titles (as they were known in the UK then; the term "fighting game" hadn't reached our shores quite yet). Did they do it for controversy? Not at all, since while controversy may gain you a few more hits online, in the world of print media it does nothing but lose you subscribers.

No, Power gave more space to DOA2 simply because that was the game they had more fun playing. It was faster-paced than TTT and that's what they preferred. The world kept on spinning and that's how it should be.

These days though, it seems you can't say a single positive word about a game without being jumped on, let alone really express how much you enjoyed a particular title. If you say you like a game, people call you a fanboy. If you say you love a game, people shout "BIAS!" (or in my case, even - and I quote - "obviously employed by Namco". Yes, really). Gamers are a little more accepting if you say you think a game is a little bad, although of course the shit hits the fan if you say you really dislike a title. That's not to mention how developers and publishers react to a negative opinion of a game.

Why do we do this? Why is it so hard to believe that someone simply really, really likes a particular game? Why should they put aside their personal opinion of a title and write an "objective" preview or review, what would even be the point? What is so wrong with enjoying videogames? After all, isn't that why we're all here, why we read these blogs and magazines?

I suppose I must have missed the "you must be a disenchanted, lackadaisical golem if you want to write about videogames" memo.
#Community
Login to vote this up!

I'm very cross, but what a guy!

I first heard of Destructoid in late 2006 and I've been lurking on Dtoid since mid 2007, though I only got around to actually signing up in early 2009.
Due to my unfortunate habit of talking and writing far, far too much and losing track of why I started in the first place, I tend to stay clear of the C-blogs for fear of finding myself up at 4am writing a three-page essay on Legend Of Dragoon, but I'll probably write the occasional rant, to everyone's dismay.

Quick shout out and mention for Love 146, a fantastic charity dealing with a very tough subject. Give them a click, listen to their story and please support them if you can.