<(Guardian Tales Warriors 3)> Not many changes here a lot of forgotten Heroes here other than Future Knight.

(Future Knight)-(True Hero?) I don’t know if this is what you become based on your choice story says otherwise that’s all I’ll say on that not to spoil anything and she has the very opposite attitude of Future Princess actually has hope and is not fighting for revenge. 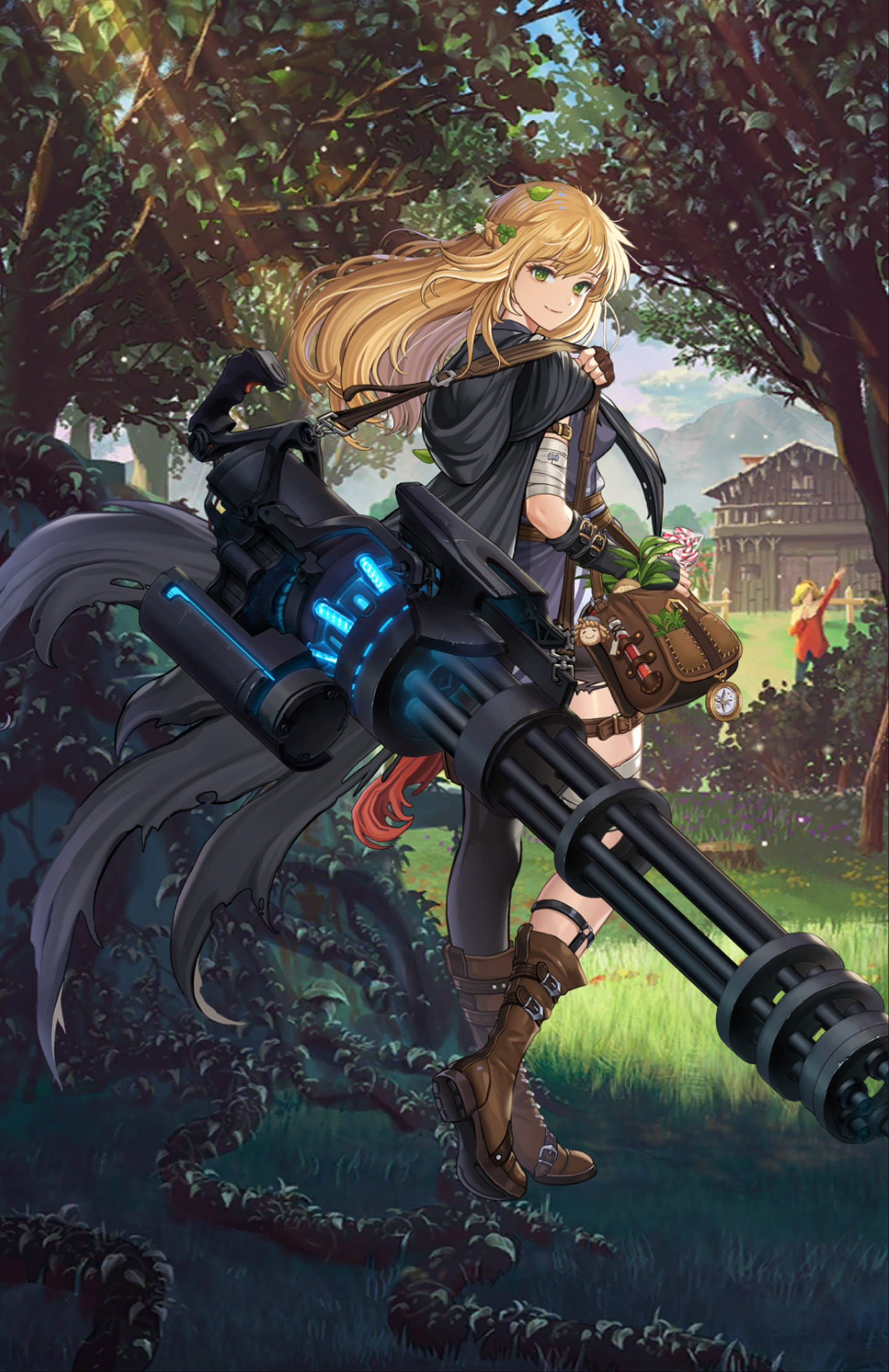 I’m not going to mess with her like I did Knight they can decide what to do here but currently over powered damage wise her fire rates like Rachel’s on steroids. Does have an ability to block 1 attack so only Tinia and her have an ability ranged class wise. If you give them Range, Basic or Critical Rate party buffs probably don’t want to mess with that team very scary. With a Rifle It’s a literal minigun or railgun if this were Soul Knight a great randomized shooter app this would be the PKP, Apex Legends the Devotion unlike those this is way to accurate. This is the ranged Lapice but deals like triple the damage and attack speed. EX has the fastest skill regen time in the game EX wise along with a regen party buff but not going to mess with it. But again she’s a BASIC.

Normal Attack: With a Rifle with that fire rate I’m going to need that damage to be below 1k and actually be less accurate if it’s going to shoot this fast literally melts your HP. Usually the faster your fire rate the more recoil and kick causing your accuracy to go down at least in games they do lower damage in real life every bullet has the potential to be fatal.

Special: Bullets should not penetrate and for that fire rate Basic Debuff should stack by 1% up to 20% for 5 seconds it's literally an immediate permanent debuff at a flat 20%. Penetrating bullets is a Hekate/Catherine thing the way this is now whats the point of having a tank if she can easily drill your back line in the right position? Doesn't go through walls why enemies?

(Lapice)-(The White Knight) You’d never expect someone like this to be such a hidden threat she isn’t exactly in the shadows she just blends into the crowd if you must face her there will be many holes left in you. I wonder where and when she will pop up in the story she hasn’t been seen in game anywhere I don’t think and was an early game Hero. I really wanted Lapice to be better but she just does no damage right now even on the perfect melee team.

This is the Melee version of Future Knight even though she has a shield and a Light Attack party buff she tickles at a much slower rate of fire than her and seems to die easily with a shield. She’s really useful for poking the back line or through walls but her damage is so low can’t interrupt succubus type enemies sometimes and I don’t understand how she dies so easily my Aisha tanks so much better than her but has very little offense and is a one handed sword fighter if they move can’t keep up Lapice doesn’t have that problem though. Her Special is basically Lupina’s but 5% more but when hit it’s free 30% Movement and Attack if hit.

Normal Attack: Every time she like has that pulse or burst should automatically critical hit and the closer you are to an enemy damage should increase up to 50%. She only attacks in straight 4 way directions this might be too much but maybe allow her to angle in all directions?

(Vishuvac)-(Fate Divider) I honestly didn’t expect her to be so upbeat and friendly at all I thought she was hunting Girgas down for another reason but no she’s trying to prevent his destiny from happening. She could be the sister he never knew he had she did for Halloween not sure what happened unlike him she loves hanging out with humans but I’m personally allergic to spicy food not actually I just hate it even the smell stings I refuse to eat my vegetables too and fruit. I want to invest in her but I got Tinia I’m building right now so will have to stay in training room sadly both I will full send though.

I don’t know how she fell honestly she’s still very strong her chain is extremely powerful and Special is a free 25% attack offensively at least since her buff she can only be at a 5% deficit and 55% advantage I’m not sure what happened she’s still a top tier Hero to me Fire is still just weak she can be a semi Tank like a Lahn. She is far from bad a strong frontline with an HP bonus just has to be on a fire team for her chain to be at maximum effectiveness but it’s still 30% defense to everyone for 8 seconds.

Normal Attack: First 2 strikes need to be twice as fast she’s way to slow compared to current Heroes look at Beth and the finisher first attack should make a large explosion around her when she pounds the ground and should be able to manually angle the cascading explosions aim assist makes this miss easily in Arena don’t even use it right now.

(Alef)-(Who?) Who came up with this guy why is he even here and gets a full side story? He doesn’t belong here just look at him when he chain skills I just want to cuss at him for some reason abnormally annoying to me but nonetheless MALE Hero. I don’t own nor want to own him but he is the best ranged tank other than Bari his Golem smashes the ground like the Hulk and that situational party buff is holding him back. I believe this is the worse Unique Hero in the game. He’s like Catherine same type of party buff defensive ranged Hero but doesn’t really have an identity other than being a ranged tank I’m going to let him slow enemies since he cannot move and shift attack and defense based on the situation. Did the best I could but I would strongly consider changing that buff to just regular defense. 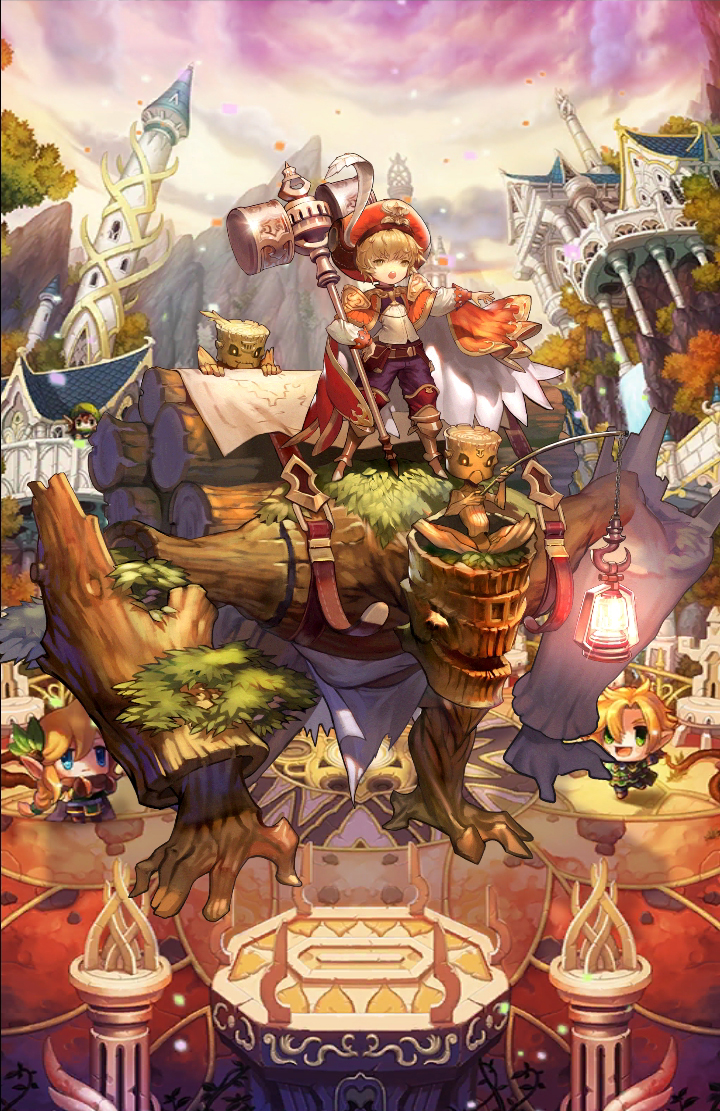 Normal Attack: Should slow enemy movement speed by 20% for 1 second from the shockwaves.

EX Weapon (Ouros): Should lower enemy attack speed as well when it activates by 5% up to 20% for 5 seconds. Skill should slow all enemies hit by 50% for 2 seconds.

(Rue)-(Rue’s on the scene) She is just an abnormally large woman The Myth, The Legend we just call her Rue why Little Rue doesn’t have a red nose I’m not sure. Santa’s personal body guard careful what you do she lets Santa know everything don’t want to land on the Naughty List. She would seem difficult to approach but no she’s not she’s nice at least to me I really like this Hero her story is pretty dark and I'm not sure if Santa had anything to do with it. But her attack style with that shotgun looks very brutal there’s going to be holes everywhere she rushes you down and keeps blasting you in the face my Girgas can usually beat Rues he’s kinda a hard counter close ranged, ranged attacker and she keeps pushing him plus he’s Fire. These buffs should put her in a much better spot she was good for a brief time but Future Princess the ruiner of fun put her on the bench.

Normal Attack: Charge should decrease Defense by 20% instead of Attack. I don’t understand why attack goes down if your puncturing them with her horns defense should go down so she can deal even more damage her Special reduces damage taken I think that’s enough defense.

EX Weapon (Terminator): Point Blank Shots should deal 15% damage and final shot stuns enemies. Charge now slows enemy movement speed by 30% for 3 seconds. Skill is really bad slow to ailment and easily avoidable just cause multiple explosions in a line once like Bianca’s or a close ranged blast of ornaments too much theatrics I know it’s Christmas themed but it does not benefit her in time the way it is now she’s a terrible party lead and will never hit with this in Arena unless they stand still much like Plitvice’s. I would say this is the slowest skill in the entire game followed closely by Catherine and Elvira’s EX Skills the reindeer cross 2 times TWICE in the same spot with like a full 2 second delay.

(Lapice) Allowed her normal attack to critical hit every time it makes that burst effect and the closer you are the higher the damage so hopefully she can actually deal damage now standing alone I’m not sure how to help her defensively she’s an offensive Aisha without the sheer offensive buffing power she has for the team. An angled attack will make her more consistent damage wise but with that reach I’m not sure Arena wise if that would be fair compared to a Girgas/Sohee.

(Vishuvac) She’s in a really good spot just needed faster attacks and more versatile range on finisher attack why nobody uses her anymore I do not know I sure intend to max her one day.

(Alef) I allowed him to slow enemy movement speed and shift offense and defense but is 10% lower than before I’m not sure what to do other than removing him from the game.

(Rue) Made her abilities make more sense EX Weapon and skill got buffed.

<(The End)> Of this Part one left for Warriors thanks for reading leave Comments and Up Vote!

Ohaider I'm a Smash Bros moveset creator I would take request but probably will be special move only won't be as detailed but if they have enough potential I will add some feedback. I'm about to shift over to another game once my last 2 characters drop though.


I'm not really a writer I just write about stuff I care about for the most part things that I felt I had to do. I am a Flightless Phoenix, just give me a shot and i'll be able to soar tired of being locked in a cage. My Roblox is "CosmicMotion" a Periastron collector which is what my logo is I play on Xbox, I also play Maplestory M as CerealKnight America inoysys server 195 Hero F2P and CerealNite America 2 on Guardian Tales F2P aswell.


Dunno what to write here really trying to be Anonymous but I eat Cereal for dinner sometimes and play and listen to rare video game music just give me a song I can usually counter it with a much better one. I collect rocks make smaller ones into necklaces I draw a bit do low key pottery and I played some real life sports when I was younger before a major injury to my left knee hit so no I'm not a nerd trust me I'm probably also one of the only people that hasn't seen Star Wars or Game of Thrones I'm 21 born 1999 October 27th favorite number is 37 my Jersey Number. I am finished on (Smash 4 Blueprints) unless I add more characters it is now in a collection so it's easier to pick what you want to see here: https://www.destructoid.com/--568161.phtml#post

Maybe impossible and I maybe a fool for trying but Shia LaBeouf has helped me move forward a lot with his "Just Do It" speech. He said Don't let your dreams be dreams, make your dreams come true. One of these days your going to work hard at it nothing is impossible. You should get to the point where anyone else would quit but your not going to stop there JUST DO IT. Which I have many times I don't care what people think of him that speech came from his heart.