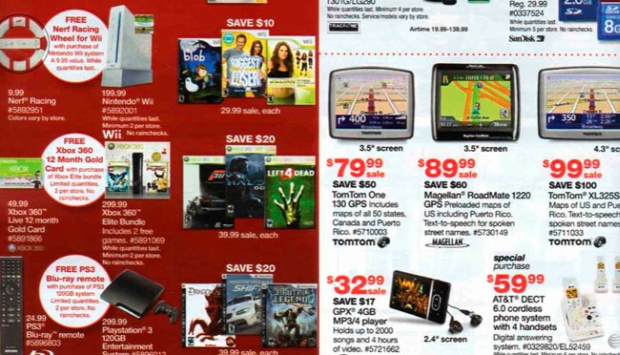 ‘Tis the season to be a crazed shopper looking for the best Holiday deals. Black Friday “leaks” are popping up all over and the latest comes from Sears. Sears is going to have your typical 2-pack game bundles in an attempt to get rid of crap no one is buying for the Xbox 360, Wii and DS.

Wait, don’t scroll away yet! They’re actually going to have some great deals on games that recently released titles! Here are the games you’ll care about most on sale at Sears:

Sears will also have some freebies they’ll be throwing in with a purchase of a new console. Wiis will come with a Nerf Racing Wheel, Xbox 360 Elite Bundles (comes with LEGO Batman and Pure) will get a 12 month Gold Card and PlayStation 3 120GB Slims purchases will come with a Blu-ray remote.

Anyone planning on camping out at a Sears to grab one of these deals?