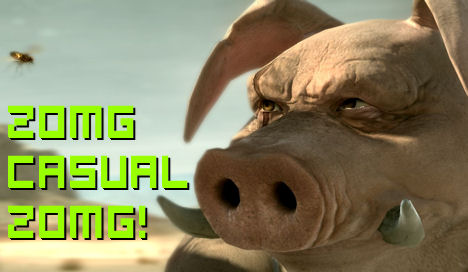 Although details on the triumphant return of Beyond Good & Evil are scarce, Ubisoft has at least confirmed one thing that may worry hardcore fans of the game — the sequel is said to be “more accessible” than the original, likely to ensure it actually sells this time.

“We saw with Beyond Good & Evil that so many customers were extremely happy with the game,” stated Ubisoft president Yves Guillemot following the Ubidays ’08 reveal. “We had a different audience at that time. We had more core gamers than casual gamers than we have today.”

“We think the game was probably a little too difficult for the general gamers at that time. We’re going to make [Beyond Good & Evil 2] more accessible and make sure that it’s really done for the new generation that’s come into video games.”

I can understand Ubisoft worrying after the financial flop that was the original, but did any of you really think it was a hard game? I didn’t think it was that difficult (save for the end boss, rargh), and I worry every time a game series threatens to dumb itself down. That said, given how badly the first game did, we’re lucky to get this sequel so I suppose one must find such compromises reasonable.

All said, it’s a little strange that this is done for the supposed “new generation,” when it’s the “old generation” that wanted it so badly. Also, is appealing to a demographic that doesn’t buy a lot of software a good idea?