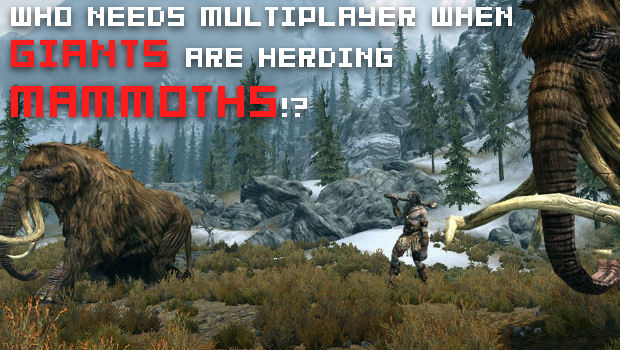 I really love Bethesda sometimes. Marketing VP Pete Hines as spoken directly to my heart, calling forced multiplayer options a “waste of time” and telling developers to scrap online features if they need to be shoehorned in.

“[People ask us] for a game like Skyrim or Prey 2, why doesn’t it have multiplayer?” he said. “Well, our question is always the opposite when we talk to a developer. If you’re doing multiplayer, why are you doing multiplayer? What are you trying to accomplish?

“If you’re doing it just to check a box or because every other publisher says you’ve got to have multiplayer, then just drop it, don’t bother, it’s a waste of time, a giant distraction and it’ll make for a worse overall game. We want the best game possible. If that’s a singleplayer game that’s 15 to 20 hours, then make that! Don’t waste your time on features that don’t make the game better.”

This is exactly how I’ve felt about multiplayer for a long time. I like a good online game, but forced multiplayer like those found in Dead Space 2 and BioShock 2 just aren’t necessary. It drives me mad to see developers checking arbitrary boxes just because everybody else is doing it. Have some balls and create a good solo campaign, if that’s what you want to do.