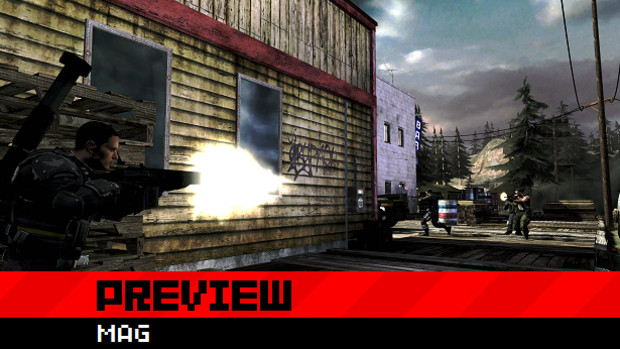 MAG, the PlayStation 3-exclusive first-person shooter that boasts 256-player multiplayer, is set to release on January 26, 2010. So to get people geared up and ready, Sony invited us to a one-on-one training session, complete with some hands-on play time with the beta.

If you haven’t been keeping up with every little detail (and you aren’t already in the beta), then feel free to read on past the jump to get the lowdown on how the game functions, and some of the impressions that I got from my limited time with it.

From the get-go, it is pretty apparent that Zipper has studied some of the other über-popular shooters out there, as MAG takes a lot of influence from Call of Duty 4: Modern Warfare and Killzone 2. Of course, if you’re going to borrow elements from other games, it makes sense to look toward the pinnacles of the genre.

That’s not to say that MAG doesn’t look to be a worthwhile game in its own right. Other than the advertised 256-player matches, there are a few things that differentiate it from other titles in the genre.

For one, upon starting up the game, the player is given a moderately robust character creation tool. What struck me as most unique about the way MAG is handling it is the persistence of the character. Players are allowed just the one slot for characters, and all of the time played, as well as experience gained, will be with that character.

After creating a character, the player must choose between one of three PMCs to join. The different factions not only have different back-stories and equipment, but each PMC also has a unique user interface, as well as unique in-game music. As a player who likes to experience all a game has to offer, I was curious to know if it is possible to explore other factions after making an initial choice — it is indeed a possibility, once the player has ranked up enough.

Speaking of ranking up, it works much like you’d expect from playing some of the other experience-based shooters out there. Certain actions like kills or objective completion net the player a few points of experience. However, in contrast to Call of Duty 4‘s or Killzone 2‘s systems — where X amount of experience unlocks Y — MAG‘s character progression more resembles that of Borderlands, with trees of skills and equipment to unlock. In a (hopefully effective) attempt to curb griefing, friendly fire with minimized damage is on, and team-killing results in experience loss.

Gaining levels rewards the player with skill points, which can be spent on a substantial number of skill trees. Players can unlock new weapons, equipment, and inherent skills (think “Perks” from Call of Duty) with their skill points. And like in Borderlands, the level cap will prevent a player from purchasing everything, so there is an element of choice in growing your character.

If, however, you purchase something and find that you dislike it and would rather have spent the skill points on something else, MAG also allows players to “respec.” Keep in mind, this requires a certain amount of in-game time, to keep people from constantly changing their specs.

One neat little feature: the skills and equipment the player buys determines his “specialty,” which is largely just a superficial designation assigned by the game.

Also in regards to the character progression, while there are no defined classes in MAG, the player is given five separate loadout slots to build and customize his own. Each slot is limited, so that somebody with a ton of stuff unlocked will not be able to bring it all into battle at once, which keeps high-level players from being way too overpowered.

Another unique feature regarding experience deals with fragmentary objectives (“fragos” for short) assigned by squad leaders. If the player completes a “frago,” or makes a kill in the area of a one assigned by his squad leader, he gets double the experience for that action. This system is there to encourage teamwork and following orders, without completely excluding those who want to do their own thing (or those who think their squad leader is dumb and doesn’t know what he’s doing).

Of course, the player can opt in to be a squad leader himself, but only after reaching level 15 in the game. As a squad leader, having squadmates accomplish objectives earns leadership points on a separate leadership skill tree, which allows certain combat bonuses, and lets the player eventually become a platoon leader, who is responsible for four squads, or the officer in charge (OIC), who is responsible for the entire battalion.

A player can choose not to go down the leadership path at all, but leaders have access to things that normal ground units don’t, like artillery strikes, mortar strikes, airstrikes, and an overhead tactical map of the battlefield. I was told that most people who are at a high enough level opt in to be a squad leader, so it is rare to get into a squad without a leader.

Naturally, when MAG releases, everybody will be at level one, so there will be no squad leaders for the more tactical game types. The solution to this is twofold; first, there is a single-player tutorial that teaches basic controls and objectives, and secondly, specific game types will only open up after the player has reached a certain level.

From the beginning, players who have completed the tutorial will only have access to the “Suppression” game type, which is a typical team deathmatch-style game. It is the smallest game type in MAG, sporting “only” 64 players, and with no objectives, it requires no squad leaders.

After gaining a few levels, the “Sabotage” game type opens up, which was described as a “capture and hold” type of game. It also features only 32 players on each team.

A few more levels in and “Acquisition” unlocks. At this point, there will be players at level 15 or higher, and this is really where the squad leaders become necessary. This is the game type that I played during my hands-on time. It puts 64 players on each team, and is an attack/defend game type where the teams take turns trying to steal the other team’s prototype vehicles. In doing so, multiple layers of defense must be breached within a time limit. (More on this in a bit.)

The last game type to unlock is “Domination.” This is the game type that gets to boast the 128 vs. 128 player matches. It is another attack/defend game type, which focuses on a fight over an oil refinery with defenders in the center of the map and attackers converging in from all four sides.

Finally, after all of this training, it was time to see the game in action. Since Zipper doesn’t want either team to start with an unfair advantage, players wait for a short period of time in a queue before getting into a game. This results in all of the 256 players starting at the same time, rather than trickling in as the game progresses.

For the “Acquisition” game type, the defending team has bunkers set up around the perimeter, which act as forward spawn points, and can be equipped with gun turrets to ward off attacks. As such, the attackers’ first objective is to destroy these bunkers, forcing the defending team to spawn deeper in the complex. Next, the attacking team typically wants to take out the defenders’ anti-aircraft artillery, so that they can make use of their own forward spawn: Parachuting into battle.

One thing that I noticed in my play time was that these spawns are key. The battlefield is gigantic, and without a forward spawn, I was spending a lot of my time running forward just to get where the action is taking place. Though it is probably a result of my inexperience with the map or the game in general, it was a bit off-putting to run somewhere for thirty seconds only to be gunned down in half a second with little warning.

There are on-screen indicators for gunfire, and they are more robust than most games. They not only let you know the relative direction of enemy gunfire, but also if said gunfire is coming in the player’s direction, or if the player was actually hit. However, MAG exists in the more realistic camp of shooters when gunplay is involved, in that it only takes a few bullets to take an enemy down. This is welcome for some and abhorred by others, so if you prefer Halo to Call of Duty for this reason, then MAG probably won’t be up your alley.

As a bit of a surprise to me, considering how ubiquitous it is today, there does not appear to be regenerating health of any kind. However, there are sporadically placed resupply areas where the player can replenish ammunition and heal wounds. There are also pieces of equipment that players can carry to regain hit points or even revive downed teammates.

If you’ve read this far, you might have the sense that after the limited time I had with MAG, I think it’s pretty rad looking. I am a sucker for character progression in my first-person shooters, and I have always preferred objective-based games, so to have such a huge game whose sole focus is on objectives sounds pretty great. But MAG isn’t without its flaws. There were a couple of things that irked me, though it should be noted that the game is still in beta, so they may be ironed out come launch day.

Despite looking gorgeous in screenshots, MAG disappointed me a bit in motion. I couldn’t quite put my finger on it, but everything seemed a bit low-res and jaggy. It normally wouldn’t bother me, but for such a fast-paced game that relies on picking out enemies from far away, it definitely made things more difficult.

Another issue I had will sound even more superficial, but it points to a lack of polish that I hope will be present in the final product. When the player holds L1 to aim down the sights, there is no animation to get there; it’s like a binary switch between shooting from the hip to aiming down the sights, and while it makes it functionally easier overall, it was very jarring not to have any transition between the two.

Still, these issues are minor in the grand scheme of things, and I am looking forward to MAG much more now than I was before. The beta has been opening up as time goes on, and this Monday a new phase will begin, with GameStop pre-order folks getting invites. If you’re at all interested in multiplayer first-person shooters, or you’re piqued by this preview, perhaps it’s worth putting down the five dollars and trying it out for yourself.