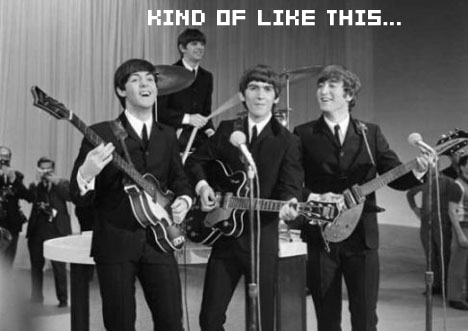 As we predicted in yesterday’s rumor, a Beatles game is coming out of the partnership between Apple Corps and MTV. A conference call between these companies and Harmonix confirmed it as press listened in on the horn. This new title does not seem to be a Rock Band game, though.

This game will take players through the full Beatles catalog, from beginning to end. It’s supposed to a celebration of the work of this legendary band. Input was gathered from Sir Paul McCartney, Ringo Starr, Yoko Ono Lennon, and Olivia Harrison.

“By presenting their music and artistry through the creative filter of a groundbreaking video game, we are giving legions of fans and music lovers all over the world a profound, new way to experience The Beatles,” said Alex Rigopulos, CEO and Co-Founder, Harmonix. “This game will be a celebration of the Beatles undeniable legacy.”

Details are scarce on how the game will actually be played. The title is coming in 2009. We do know that musical controllers will be involved, but not much past that. More details are to be released soon.

Exclusive Agreement Set to Bring The Beatles Music to Fans for the First Time in Interactive Form Here, There and Everywhere in 2009

New York, NY – October 30, 2008 – The Beatles’ extraordinary music and phenomenal legacy is set to rock across the universe in the form of a video game through an exclusive partnership between Apple Corps Ltd., Harmonix and MTV Games, a part of Viacom’s MTV Networks (NYSE: VIA, VIA.B).

This partnership marks the first time that Apple Corps, along with EMI Music, Harrisongs Ltd, and Sony/ATV Music Publishing, has agreed to present The Beatles music in an interactive video game format. Published by MTV Games and developed by Harmonix, the world’s premier music video game company and creators of the best-selling Rock Band®, the game will be an unprecedented, experiential progression through and celebration of the music and artistry of The Beatles. The game was creatively conceived with input from Sir Paul McCartney and Ringo Starr, along with Yoko Ono Lennon and Olivia Harrison, and enjoys their full blessing. In addition, Giles Martin, co-producer of The Beatles innovative LOVE project, will provide his expertise and serve as Music Producer for this groundbreaking Beatles project.

“The project is a fun idea which broadens the appeal of The Beatles and their music. I like people having the opportunity to get to know the music from the inside out,” Sir Paul McCartney said.

“It gives me great pleasure to be part of The Beatles / Apple and Harmonix / Rock Band partnership,” said Ringo Starr.  “The Beatles continue to evolve with the passing of time and how wonderful that The Beatles’ legacy will find its natural progression into the 21st century through the computerized world we live in.  Let the games commence.”

“It’s cool.  I love it and hope it will keep inspiring and encouraging the young generation for many decades,” said Yoko Ono Lennon.

“People are having so much fun playing Rock Band.  Combined with The Beatles tracks, it is a great way to either listen or participate,” said Olivia Harrison.  “If you like the music, it doesn’t take much persuasion to get you to play.”

“Introducing the genius of The Beatles to a whole new generation of music lovers through original and inspired ways is extremely exciting to us at Apple Corps,” stated Jeff Jones, CEO, Apple Corps.  “We are truly pleased to be working with the innovative forces at MTV and Harmonix as they embody our mutual passions for music and creativity.”

“Many of us have been part of a generation that has long enjoyed an enduring love affair with The Beatles and now we’re looking to extend that love affair for future generations to enjoy,” said Van Toffler.” “Our inspiration for this project comes from a keen sense of history and a place of utmost reverence and respect for the band, their music and their heritage.”

“The impact of The Beatles is forever ingrained in the hearts, minds and souls of millions the world over,” said Judy McGrath, Chairman and CEO of MTV Networks. “The Beatles are the reason many of us are WHERE we are, and some of us are WHO we are.”

“We are honored to be part of this new way for people to discover the timeless music and art of The Beatles – the most creatively and commercially successful, critically acclaimed, and influential band in the history of popular music,” stated Paul DeGooyer, MTV’s Senior Vice President of Electronic Games & Music.

“By presenting their music and artistry through the creative filter of a groundbreaking video game, we are giving legions of fans and music lovers all over the world a profound, new way to experience The Beatles,” said Alex Rigopulos, CEO and Co-Founder, Harmonix. “This game will be a celebration of the Beatles undeniable legacy.”