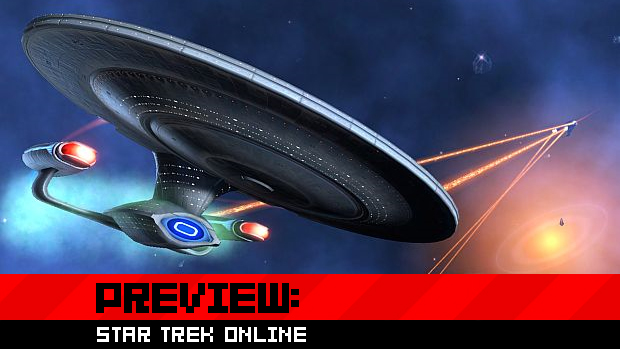 It’s something many a geek has dreamed of. Being able to go where no man has gone before into an MMO based off Star Trek, where they can live long and prosper. If the game was good, they would hopefully find that resistance would be futile.

Now that’s out of the way, I’m sure you’re ready to check out the state of the latest in MMO to come from Cryptic Studios, the guys behind Champions Online. Star Trek Online is obviously a game of total fanservice. With all the phasers, beaming, holograms, and drama that you could ask for, Star Trek Online has a lot for fans. But does it offer much for people who are only casual fans of Star Trek, or who may not like Star Trek at all? Hit the jump to make that decision.

Taking place during the Prime Timeline, in Star Date 2409, thirty years after the actions in Star Trek: Nemesis, Star Trek Online is the world of Star Trek that we all know and love. It occurs after Spock had gone back back in time to hang out in JJ Abrams interpretation of the universe, but things will be very recognizable for even marginal viewers of Star Trek. Unfortunately, most of the characters we know from the shows are dead now, so don’t expect more than a few character cameos.

When starting up, players will have the option to choose to be either a member of Starfleet, or they can side with the Klingon federation. Things can be a little wonky with canon, as a Nausicaan (who  are normally the bane of Starfleet) can captain a Starfleet ship, and plenty of absurd non-Klingons can rock out on the Klingon side, but players are more than encouraged to create their own back story for their captains to flesh out the universe.

While it is simple to just pick Human, Klingon, Romulan, or the always sexy Ferengi, Cryptic Studios has thoughtfully allowed players to create their own alien races. Which is very cool for a Star Trek fan, and it gets even cooler when you take this into account with the exploration element of Star Trek Online. Besides the instances that rely on episodic plot elements, players will be “going where no man has gone before” and meeting new races and beings. Cryptic has a randomizer for these encounters, so with luck you may actually see your own created race out and about.

When creating their captain, players will be able to choose their career. Will this captain be more tactical, which means they’ll tend to be more aggressive in combat on land and space? Will they be more Engineering focused, or Science based? All three of these choices will make an impact on the how your captain interacts with the universe, and tends to be the three sort of class types that players can assign. Ultimately, the goal is to make sure that the players feel like they are in an episode or movie of Star Trek, so plunking you down as a captain with a unique personality with unique goals is important for this game.

Star Trek Online is split between two different play modes. The first is the actual space combat, where players control their Starfleet or Klingon-based ship and enter battle. Space battles are a slow affair. Instead of dog fights, ships are slow lumbering things, with shields placed in quadrants over the ship. Players are going to focus on balancing energy between the four shield quadrants, the energy for the phasers, the directions of the photon cannons, engines, and all that jazz. It’s a tactical affair, where getting in the right spot in relation to your opponents is paramount.

Depending on the career of your captain, you’ll have different tactical options, so it’s important to know your role, especially when working with others. For these space battles, up to five players can work together to deal with a threat, and the tactical, engineering and science careers will play differently.

Ground play is much more standard MMO affair, as well as much faster paced than space combat. Groups of 5 head down to which ever planet that has moon princess problems and proceed to shoot the living hell out of bad guys. There are plenty of weapons you can equip, and while most are phasers (and really freaking huge guns), each weapon has a melee move.

Actual melee weapons are available, but Star Trek Online plays almost like a third person shooter, so get used to strafing and dodging. Up to three weapons can be held by the captain, and each has three specialized powers, so it’s all about balance.

An important element of Star Trek Online is the bridge crew. These guys, who are oddly collectible, have their own stats and special abilities that contribute to their role in battle on planets and in space. They will be focused on Science, Engineering and Tactics like your captain, so depending on what role you assign them on the ship, they will have different abilities. On ground, should there not be enough human players to round out  the five, Bridge Crew members will come down and fight with you, and they too will have certain abilities to contribute to the game.

Think of them as typical MMO pets, except they are very important, and will be integral to playing, especially if you decide to solo. Making sure they have the right skill sets and weapons will go a long way. Even better, you can deck them out in whatever uniform color option, so a squad of ready-to-die red shirts can be waiting for you.

For those who want to look on the bigger, overall game, there are instances called Fleet Actions, which will take more than 20 to 30 ships to complete. Borg problems stand a strong chance of showing up here, so for fans of these obnoxious people (and sexy Seven of Nine) should enjoy kicking Borg ass. Obviously, these areas are much more difficult to deal with, but for fans of larger meta games, this should be exciting. Also, there will be neutral zones near these Fleet Actions that PvP players will be able to duke it out.

Customization goes beyond that of the character creator, which has plenty of influence from the Champions Online engine. Your ships, which range from the typical Miranda Class Starfleet ship, to obscure ship types, like the Luna class, are all customizable, to an extent. Certain color options (within the Starfleet and Klingon standards) are allowed, as well as ship additions. There’s nothing too crazy there, but I was told that Cryptic is looking to possibly introducing a neutral third faction in the future, one that will allow crazier designs.

In the end, it looks like there is going to be a lot of options for fans of Star Trek. While the strong shift in gameplay styles between the ship battles and the ground battles might be a turn off to many players, it still pretty much recreates an episode of Star Trek. Fans of the series will probably want to pay a lot of attention to the customization options, and the epic moments they will be able to recreate in the game, while casual fans will just want to screw around and make Klingons hack at stuff. Hopefully Cryptic Studios will be able to finish the polish on Star Trek Online for a solid release this February. And even more, hopefully people outside of the trekkie fandom will find something to like as well.