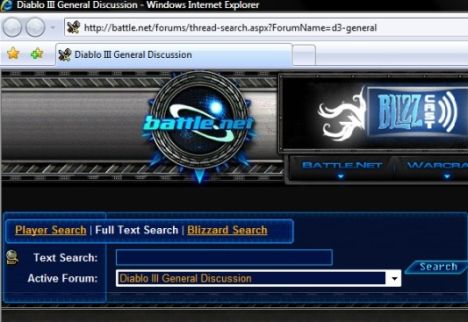 Since my last post in April about Diablo 3 buzz, I’ve avoided talk of the title on the front page, although our beloved cbloggers have filled their void nicely with their own speculations on the possibility of the much-wanted sequel. However, when changes on Battle.net take place, they warrant discussion, especially since they’re official. The appearance of Diablo 3 forums sent many fans into a fainting spell (hopefully they had a friend around with smelling salts handy.)

Not only did a forum for Diablo 3 pop up, but also a forum for Diablo 4 and 5 (Thanks Mike!), which surely resulted in more nipple stiffening and general hysteria. I haven’t heard anything about these titles becoming a possibility, but the whole thing makes me realize I’m merely one of thousands of pet cats that Blizzard is dangling a delicious mouse in front of right now.

Are you convinced? Or do you think the Worldwide Invitational event will only result in more teasing for all of us still suffering from acute Diablo 2 addiction?