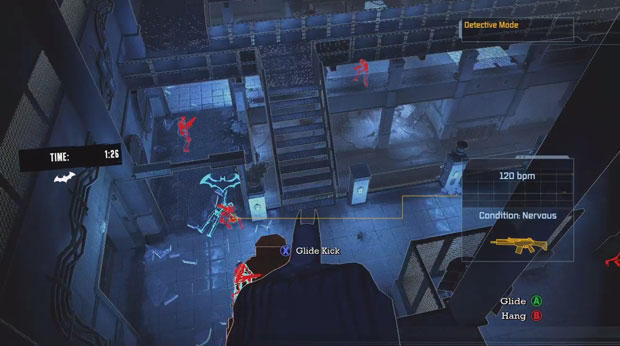 After getting my hands on Batman: Arkham Asylum at Game Developers Conference a few weeks ago, I can safely say it’s on my “must-play list.” I was a bit more forgiving than Anthony when it came to the game’s combat, something that has potential to become a wild, button-mashing-fest.

I also look forward to spending more time sneaking around Arkham Asylum, using Batman’s stealth abilities to take out unsuspecting thugs. Why? Because when I was handed the controller at GDC, a few seconds didn’t pass before I had alerted every thug in the area. Fact: I’m terrible at sneaking around, regardless of what tools a developer gives to me.

Warner Bros. and Eidos didn’t want us grabbing footage of the game at our hands-on appointment, and now I know why. Today, they released a video of a full walkthrough of one of the game’s “Invisible Predator” rooms, the same one I played at GDC. In the hands of Sefton Hill, Game Director at developer Rocksteady, Batman is a silent killing machine. Me? A bat in a china shop.

Hit the jump to check out six minutes of Batman sneaking around and glide-kicking fools in the face.