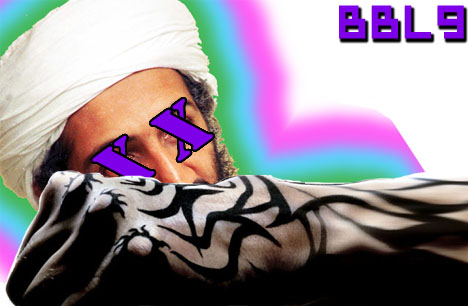 So, God Hand. Let’s get those big questions cleared away before we begin, shall we?

First, those of you paying attention might note that while God Hand recently enjoyed a nigh-universal price cut, the new $19.99 new / $17.99 used sticker price doesn’t quite fit in with BBL’s price standards; indeed, you can’t really label a game like God Hand as necessarily bargain bin, not yet. But with as many copies as I see going unpurchased on store shelves everywhere, it’s only a matter of time ’til the game becomes especially cheap — until then, God Hand is certainly a steal at its current price. Consider this a preemptive Bargain Bin Laden.

Also, a quick glance into this write-up’s immediate future (being teh psykik that I am) reveals the angry cries of “overrated!”, and “IGN gave this a 3.0, therefore it blows!”, and “I’m sick and tired of elitist gaming journalists telling me to buy this crappy game!” and so forth. I understand a little hesitation, but trust me anyway. It’s a great game.

God Hand ain’t perfect, but where it shines, it shines in the way that few games ever have. It’s hardly the most underrated game of all time, but it sure as hell isn’t the worst, as IGN would have you believe. The goal, then, is to at least get you in a mindset that yearns for the experience that God Hand can offer. A mindset that screams “I need to spank people.”

Prepare yourself for some epic length, and hit that jump for more.

September 14, 2006
Developed by: Clover Studio
Bargain Binned(?): $19.99 new at most gaming retail shacks, $12-$17 used, sometimes under ten bucks at Mom and Pop shops. Expect this game’s price to slide dramatically in the coming months as more people refuse to buy it, because people are stupid.

When God Hand was originally released, I passed on it. I passed despite being more than stoked about it, given everything that I had heard: a resurrection of old-school beat-em-ups on its way from my new favorite developer, Clover Studio? One that potentially might not suck where others had sucked so very hard? Sign me up! Then it happened: a bunch of pussies up and slapped the game upside the head. I’m speaking of course of your friends and mine at IGN, or specifically Chris Roper, and his decision to give God Hand a 3.0 out of 10.

If you look into Chris’s blog on IGN, his last post concerns his response to the legions of naysayers that came a-knockin’ after he took his big, meaty dump in God Hand’s lap. Speak yo’ mind, Chris:

The fact is that I think the game is a piece of shit, and nearly everyone in the office agrees with me. Mark Ryan happens to like the game a fair bit, and on some level I can see why. It’s certainly a love it or hate it type of game, and I don’t think anyone can argue with that. Well, if they’ve actually played it that is, which most of the people bitching about the scores almost certainly haven’t.

It’s rather amazing how easy it is to predict how well-received most any review will be based on the score. That is, if I’d given the game a 6.0 with the exact same text (even though that wouldn’t have matched the score), there would be a lot less bitching.

Well, not exactly. Chris’ review was definitely a 3.0 review, and the sentiments throughout the text matched the score in kind. He reduces God Hand‘s gameplay down to “an extremely tedious brawler where you’ll generally mash a button or two until an enemy is dead”, which sounded exactly like the kind of game I wasn’t interested in playing; and, tragically enough, is also exactly what the game isn’t.

A couple of weeks later, I found time to sit down with a friend’s copy and was instantly hooked. Enamored with the game’s outlandish humor, the unforgiving gameplay and character customization you’re unlikely to see outside of the Armored Core series, I marched out that evening to secure a copy of my own. Later, I learned that Chris (and, if we’re to believe him, the entire staff of IGN along with him) was definitely in the minority amongst his peers. Most reviews settled on a solid 7.5 to 8.0 for God Hand, noting a handful of flaws amongst an otherwise innovative and brilliant title. Chris got his ass beat, so he slapped it with a 3.0. Weak.

The point to this hefty helping of backstory is this: I almost didn’t buy God Hand because of IGN’s review. Having actually played the hell out of the game since then, I’ll be the first to admit that it was right stupid of me taking IGN’s word, but there’s  score like that on such a popular gaming website as IGN can really wreak havoc on a game’s sales strength; lots of people read IGN. Hell, back then, I read IGN, but certainly not after this little episode.

In sum, God Hand is a game whose commercial success was deftly murdered by an asshole in a high place. Having established this, let’s get on to the game itself, yeah?

As I’ve already spewn a half-novel in personal backstory over God Hand, I’ll refrain from going over the game’s story and instead refer you to Herr Wiki; rest assured, however, that the tale is about as wacky as the game is on the whole. Let’s get to the meat on the bones: the gameplay.

God Hand features a behind-the-shoulder camera scheme not unlike Resident Evil 4, meaning that “up” on the controller translates to “forward”, et cetera. Attacks are assigned at the player’s discretion to the Dual Shock’s face buttons in addition to combinations of buttons whilst holding back on the analog stick. The right analog stick controls quick dodges and directional dashing, which you will absolutely need if you want to stay alive. Seems simple enough, right?

The customization is worked in via God Hand’s intuitive and unusually fun-to-tinker-with combo creation system. From the moment the game begins, the player is allowed the option of creating unique combo attacks in a submenu accessible at any point in the game. These can range from single-button attacks assigned to the Triangle and X buttons, but the Square button is a whole different beast, allowing for multiple attacks to be chained with successive presses of the button.

For example, say you have five slots to work with, and your current combo goes something like this: left jab, right jab, right cross, uppercut, left roundhouse. It might be that the combo is too slow to be effective, or maybe the uppercut knocks your enemies too high in the air for the roundhouse to connect. You can transpose the two final strikes in your combo, or set the uppercut and the left roundhouse at the beginning of the combo to set up a juggling attack. There are loads of options, particularly when one factors in the over 100 attacks available in the course of the game.

Additionally, the eponymous God Hand itself allows for devastating attacks at key points in the game. Special attacks can be attached to the player’s God Reel, which can be activated at any time, provided the player has enough orbs (represented in-game as cards scattered throughout the level) to pull it off. These attacks are downright brutal and range anywhere from straight-out pummelings to a swift kick in the pills. Also, your current stock of TP — power gained by defeating or taunting enemies — can be emptied in an all-out assault by unleashing the God Hand. During this time you’re rendered invincible to enemy attacks while your own strikes fly faster and hit harder. Good way to take out a particularly nasty boss in a pinch.

The game flow itself is pretty basic, on the other hand. You move from one area to the next, dispatching foes and picking up items along the way. Levels are intermittently broken up by visits to a rust-bucket town where you can spend your hard-earned coin on new moves, power ups, and so on. The daring can throw down in a gambling hall, potentially boosting your financial reach by leaps and bounds, often translating into the best means of powering up Gene.

God Hand is hard, at times ruthlessly so, and you’ll probably die more times than you’d care to in any other circumstance. Like many of the other somewhat difficult games I’ve featured on BBL, however, God Hand isn’t necessarily unfair; it has a steep learning curve, and the game expects you to learn, and quick. As I mentioned above, learning to dodge and dash around your enemies is absolutely paramount to your survival; where you might spend the better part of a minute taking out a group of thugs, those same thugs can strike you four or five times and take your life meter down to practically nothing. Rest assured, however, that with some time and a little practice, your play style will morph into something more effortless than it was in your first attempt at God Hand. Just– y’know, expect to be slapped around a bit.

Where God Hand‘s difficulty becomes somewhat unfair, however, is built into the mechanics of the game itself, particularly the camera. God Hand offers no option to change camera distance and stays permanently fixed in a rather close position behind Gene’s shoulder, making enemies in the periphery particularly lethal. Again, this is something you can learn to work around — keep ready to dodge at the slightest hint of danger, knock individual enemies away from a group to take them on solo, that kind of thing — but it can put a damper on an otherwise sparkling experience. Worth knocking a point or two off of the game’s score? You bet. Worth a three? Holy God, no.

As you might’ve already guessed, there’s a lot I can say about this game. It’s a brilliant title, imperfect though it may be, and it deserves a space on your shelf. It’s a game that you’ll revisit time and time again after finishing, and for those of us with a flair for unholy difficulty, you can always take a second trip through God Hand on the game’s hard mode. It’s not quite BBL Cheap™ yet, but at $15, God Hand is an absolute steal. So buy this game!, or wait until it drops another five or ten bucks. Either way, you’ll be glad you did.