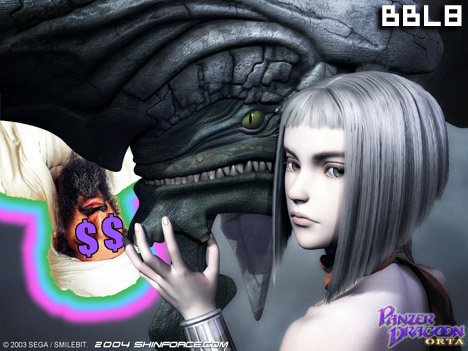 Did you know that “Bargain Bin Laden” has been incorporated into several terrorism aggregate news feeds since its inception? It’s true! Good to know that those looking for the latest updates on the US’s #1 most wanted can also read up on Mobile Light Force 2.

Eight! We’re at eight! That’s — that’s almost ten! Seeing as how we’re in the mood for celebrating numerical milestones of late, I’m trying to think of something particularly sexy when we finally hit double digits. Therefore, I’m calling upon retailers: drop the price of new PS3s to $100 so we can feature the system on BBL. Hey, come on — that’s not so low, it’s still about $50 more than the PS3 is actually worth. Oh, snap.

Anyhow, I’ve been kickin’ out the jams with Bargain Bin Laden for almost three months, and I’m glad to have the lot of you along for the ride. Don’t forget: when you spy great games at great prices, stumble across some kick-ass finds or just can’t hide your unbridled passion for BBL, drop me a line and let me know.

What you’re looking at, folks, is the only Panzer Dragoon title released beyond the Sega Saturn’s brief lifespan; if you missed that entire chunk of gaming history as I had (returning only by means of the serendipitous double-score of a Sega Saturn and Dragon Force at a pawn shop for $25), chances are you never had the opportunity to sample one of the finest pantheons of rail shooters ever made. That’s right: rail shooters. Though you will be hailing down cascades of fire and lightning over the burning rubble of ruined cities whilst riding atop your mighty mount, your influence upon the chaos that surrounds you is limited to, essentially, pointing and shooting.

That’s not to say that rail shooters are bad, or that you’ll be particularly bored playing Orta. Unlike its brethren Star Fox, Rez and countless horrible PC rail-shooters, what lies before you is not the only threat. The Panzer Dragoon games attack you from all sides, and to defend yourself while careening through a level, you’ll have to distribute your fury in every direction. If you think you know rail shooters from previous experience with games like Star Fox, you must play Orta — the incorporation of this 360° field of play elevates the tension and manic play style to something approaching a conventional shmup than a typical on-rails shooter.

The short version: rethink the genre. Take it from a guy who ain’t much for Star Fox: Orta is an entirely different experience. Notably, the Panzer games features a rather epic storyline, one explored best in the series’ 1998 RPG incarnation, Panzer Dragoon Saga. While a somewhat complex storyline and realized world isn’t what you’d expect from a rail shooter, I point it out to draw further attention to the fact that Panzer, and Orta particularly, can be considered incredible departures from the conventional mainstays of the genre.

Your dragon, the pimpin’-est ride in the history of transportation, is seated at the heart of the gameplay. At any time during play, you have the option of morphing your dragon into a different form — a concept introduced in Panzer Dragoon Zwei — with a press of a button. There are three forms in all, and each offers different strengths and weaknesses — the Base Wing is balanced in maneuverability and power, Heavy Wing is the brute, laying waste to targets with bio-lasers and berserk attacks, and Glide Wing is the most graceful and agile of your dragon’s forms. To kick the maximum amount of ass, you’ll have to switch between these forms often, adjusting your technique and tactics to fit the situation, something you’ll be doing many, many times in a given level.

Controlling your dragon’s path of flight is only capable while you’re facing forward, and it is in this orientation that Orta takes on a similar feel to traditional rail-shooters like Star Fox. While you direct your mount’s course through the sky, you can lock on to enemies by holding down the fire button and passing the targeting reticle over foes and unleash hell by releasing that button. Additionally, you’re able to speed up or slow down at a moment’s notice, allowing for the sort of strategic positioning to really get one over on your enemies.

Orta, like its predecessors, features a breathtaking score and utterly astounding graphics. If Sega could make these games look great on the Saturn, it’s not surprising that Orta looks as great as it does on the Xbox. Of particular note is just how much is actually going on in the game while you’re careening through it; there’s all kinds of stuff to see everywhere you look, and that much action on-screen gives the game an absolutely epic feel.

True to the tradition of ruthless beatings that Smilebit established with Gunvalkyrie, Orta ain’t easy. Take what you believe to be standard difficulty settings and stomp ’em down a peg, and you’ve got Orta’s difficulty settings: what is defined as “hard” in most games, well, that’s Orta’s “normal”. So you can imagine how battered you’ll feel after a once-through with hard mode in Orta. Also similar to Gunvalkyrie, however, is the compulsion to return for more after being thoroughly raped by a boss or a particularly nasty stretch in a level. The game is challenging, but never frustrating. If you died, it’s because you suck, and the first thing you’ll want to do after getting mercilessly slaughtered is to jump right back in and see if you can do better.

Orta features ten levels (or “episodes”) that you’ll probably hammer out in a matter of hours, provided you aren’t absolutely annihilated because you selected the wrong difficulty (like me). There’s plenty of incentive to carry on, however: the game features an unusually huge catalog of unlockable materials, much more than you might expect from a rail-shooter. Your performance is rated at the end of every level, and the better you do, the more schwag you’re granted access to. These bonuses include additional missions, concept art, challenge modes, and a complete port of the original Panzer Dragoon. That’s worth the price of admission right there.

Of the seven Xbox games I own, six of them are Sega games — that’s one of the reasons I love the system. The Xbox became a haven for Dreamcast games that were shuffled loose the docket upon the system’s untimely death; now that we’re knee-deep in the new generation, all of these games can be yours for dirt cheap. Orta is absolutely incredible and you owe it to yourself to play such an amazing effort in design. Buy this game!