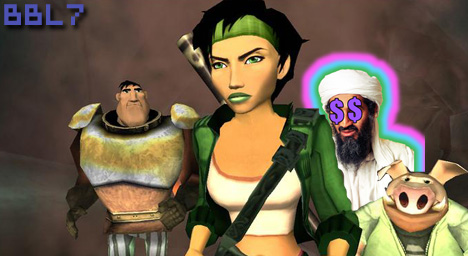 You don’t really need me to go on and on about Ubisoft’s incredible Beyond Good and Evil, do you? The same people that busy themselves fellating Fumito Ueda over Shadow of the Colossus and ICO and waxing philosophical on the genius of Shigesato Itoi and the Mother series (read: me) have probably whispered to you of plans to blow up a Dunkin Donuts to show Ubisoft how much they want a sequel.

The Zelda series spawned a genre that offers a special kind of adventure, and it is within this genre that games like Okami and Beyond Good and Evil were cultivated. Great action, amazing character design, a killer plot and spectacular gameplay — BG&E has it all. It’s a damn fine game, available on all major platforms, and a steal at ten bucks. You must buy this game. Hit the jump for more!

Beyond Good and Evil (XBOX, PS2, GCN)
Original Release: November 11, 2003
Developed by: Ubisoft
Bargain Binned: $9.99 at GameStop/EBGames, usually cheaper at Mom & Pop shops.
A Special Bold-Type Announcement from Aaron: If you have an Xbox, buy the Xbox version. Failing that, get the GameCube version if you’ve got a GameCube. Failing that, buy a GameCube or Xbox, because the PS2 version has some serious issues.
Haven’t played BG&E before? No worries, my son. Watch the above video detailing the game’s introduction and first battle and you’ll understand why I like it so much. This game is cinematic, very much so. And the production value is incredible, offering not only stellar voice acting but a dazzling array of characters that are increasingly well designed and wonderfully animated. It’s just a badass total package, and — big deal, here — completely original. This isn’t a sequel, or a licensed adaptation, or some bullshit spinoff. A rare thing nowadays, indeed.
Beyond Good and Evil was created by Michel Ancel, most known as the creator of Rayman, in Ubisoft’s Montpellier studios in France. Just as Ancel built upon the 3D platforming genre with Rayman 2: The Great Escape, Beyond Good and Evil stands as an expansion upon the adventure genre popularized by the Legend of Zelda series. Ancel’s got a good head on his shoulders, and rather than make just another Zelda clone, he incorporated a number of features that make BG&E into a somehow more whole gaming experience than you might expect.
It’s got quite a story. BG&E concerns a planet called Hillys, plagued by assaults from a relatively unknown alien force known as the DomZ. The Alpha Section, a division of the Hillys military, institutes a state of kinda-sorta martial law under the extreme circumstances, claiming that they’ve found a way to eliminate the threat for good. As you may already suspect, something about the whole situation doesn’t smell right; Beyond Good and Evil‘s long, complicated plot deals primarily with Jade, a young photographer, unraveling the conspiracies that bind the DomZ and the Alpha Section together, with all kinds of ass-kickin’ along the way.
For a game that looks like BG&E does, you wouldn’t expect it to have such a heavy plot. I don’t mean to say that it looks bad — quite the contrary. The character design and animation are straight out of a kickass Don Bluth or Dreamworks animated feature, and like these films, you’d expect the anthropomorphic pig to kick up and dance a jig every now and then — doesn’t happen. What does happen are alien abductions, scientific experiments upon innocent civilians, murder, deceit, and conspiracy. The themes are thick, but the plot is remarkably competent and doesn’t overthink itself. The characters, particularly Jade herself and the aforementioned anthropomorphic pig (name of Pey’j) are thoroughly developed throughout the course of the game, which comes to a satisfying conclusion, leaving just enough hope for further additions to the series down the line. Ancel did a hell of a job writing this game, and it’s one of the biggest draws in playing it. Now if only they’d make a goddamn sequel …
Er, anyways, BG&E isn’t just a terribly engaging plot and pretty on the eyes; it’s an absolute blast to play, too. As I said, the conventions of 3D-based action-adventure gaming cemented by Ocarina of Time on the N64 are well-represented in this game, and where Ubisoft expands upon these tried-and-true techniques of game design, they rarely miss a beat. Jade’s assault on the DomZ army is ruthless, swift, and virtually seamless, a feat particularly evident when taking on multiple enemies at once. I don’t mean easy, however — BG&E will give you a run for your money from time to time — I simply mean astoundingly well executed. Take the game for a spin and you’ll see what I mean when BG&E hurls you headlong into combat less than 2 minutes into the start of the game. (I love this — too many games take way too much time to get rolling, nowadays.)
Additionally, as a news photographer, Jade has the opportunity to whip out her camera at any time to take pictures of whatever she stumbles across. Successful snappage of animals throughout the game’s world, characters and other items of interest will win you some handsome rewards — it’s a nice addition to the game, something that can keep you interested in those interim periods of exploration or gathering information. Frank West, eat your heart out.
As I mentioned earlier, this game has a shine to it that few developers put the work into producing. Everything about it screams top-notch — well, if you’re playing the Xbox version, anyway — great music, great voice-acting, and lots of little touches that push BG&E as far as it can possibly go. Ten bucks is a little high to garner Bargain Bin Laden’s lusty glance, but trust me, it’s definitely worth it. Buy this game.