Heroes Over Europe is the sequel to 2005’s Heroes Over the Pacific, which came out for last-gen consoles. This time, players will find themselves flying over England, France, Germany and even New Zealand as they take on Hitler’s dirty Nazi forces.

I got to check out a couple of levels during Atari’s Preview Tour and was rather pleased with what I saw. Fly on over to the jump to check out my impressions. 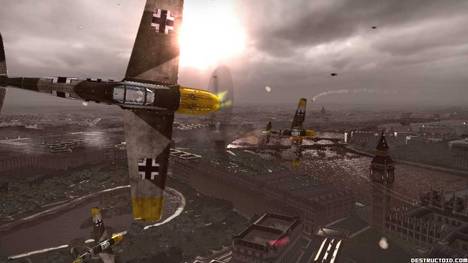 We all know the story by now. It’s World War II and it’s your job to kick some Nazi ass. But before you can do that, you need to prove yourself to a teammate by showing him that you know the basics. In other words, the game begins with a tutorial set in France.

Controls are actually rather simple for Heroes Over Europe. You’ll use both joysticks to fly your plane, the triggers are used for your weapons, and that’s it. The game has an arcade feel to it so it won’t take long for you to get a hang of things. It’s really easy to perform moves like barrel rolls and you won’t have the worry that comes from simulation flight games such as stalling.

As you’re getting the hang of things in the first mission, you encounter a group of German bombers. They don’t have any escorts with them, so they’re pretty easy pickings for the player. After taking them out, you find out that German ground forces have made it into France. Things are looking pretty bad for the Allied forces, as they believe that the Germans haven’t made it this far in yet.

After taking out the ground troops, the first real challenge presented itself as the escort planes finally arrived. My teammate and I were outnumbered, but there’s a nice trick players have that will help out in tight situations. Players will have the ability to basically go into a bullet-time-like mode. Players will need to line up their reticle on an enemy plane and hold it until the meter on the reticle fills up. Once it has, things will slow down and the player can take an instant kill shot on specific parts of enemy planes, such as the wings or the enemy pilot’s head. This mechanic took a bit of getting used to, and I was shot out of the sky before I was able to perfect this trick. You can, of course, still go after enemy planes the normal way, but you’ll need to learn this bullet-time-like mode to survive when outnumbered. 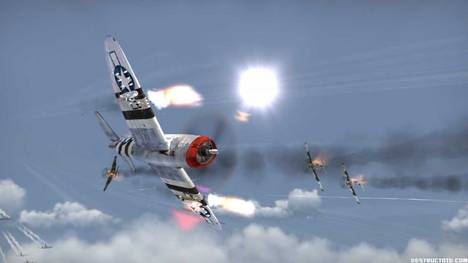 After this intro, I was taken to a later level where your pilot and team were escorting a bunch of B-17 bombers, one of 40-plus planes in the game that are based on real aircraft from World War II. This particular mission had a twist to it. Apparently, Germans would capture Allied B-17 bombers and use them to launch sneak attacks. The Germans would blend in with Allied air squads and would then open fire on Allied planes, causing all sorts of chaos.

Heroes Over Europe will have missions based on real historical events that took place during World War II, such as this B-17 bombing run with German spies. The game will also feature real footage from the war as the game’s cutscenes.

Overall, the game looks and feels great. It was really impressive seeing all of the action taking place in the sky and the controls are very easy to get the hang of. One thing I would have really liked to see during my preview is the 16-player multiplayer. There will only be four modes for the online, but let’s face it, everyone will probably just be playing the free for all mode.

Heroes Over Europe is developed by Transmission Games and published by Atari for the Xbox 360, PlayStation 3 and PC. The game will be out in early 2009.