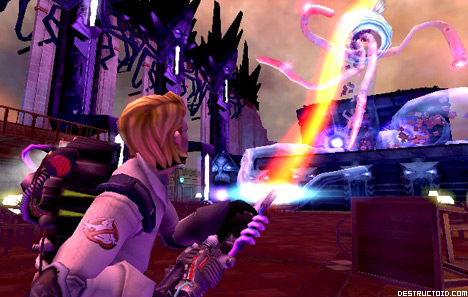 You just read about the HD versions of Ghostbusters, now it’s time to check out the waggly version of Ghostbusters. Both versions will share the same storyline, but the presentation and gameplay will be different on the Wii.

I ain’t afraid of no ghosts, but I am afraid of giant cartoony celebrity heads. Read on to hear all about the Wii version of Ghostbusters.

The Wii version will see a Pixar type of approach in terms of graphics. The Ghostbusters will look more like cartoon characters, and no, not like the cartoon versions from The Real Ghostbusters/Extreme Ghostbusters. The environments will be destructible still too, but nowhere near as much as the HD versions.

Another major differences between the HD versions and this one will see two-player co-op. You’ll have the choice between picking from a guy or girl rookie who’s stuck being the ginni pig for the Ghostbuster as they test out their new weapons.

While the story is still the same, there are some differences in how the story unfolds. In the 360 version I played, I fought the book ghost mini-boss in the flooded basement. In the Wii version, you will fight that mini-boss just prior to the basement and solve a puzzle in its place. 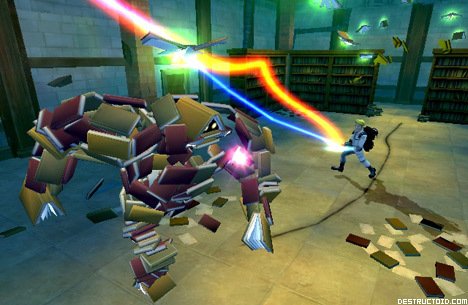 There’s a lot of focus on puzzles in this version of the game. It’s an almost even mix of puzzle and action whereas the other versions are mostly made up of action. The PKE meter will see a ton of use here to solve all of these puzzles. The flooded basement portion will require players to equip the PKE meter to find a path out of the basement. The PKE meter revealed a series of invisible floating platforms that you must use to get out of the room.

The Wiimote felt very responsive as I aimed my proton blaster at ghosts. Like the other version, you’ll have to slam ghosts in order to weaken them enough to capture. And like the other version, I had a hell of a time getting this method down. Capturing ghosts is like a mini-game, as you have to follow the prompts in which direction to slam ghosts in. Once you’ve slammed them enough times side-to-side, you will have to slam them straight down to the ground and then use your nunchuck to toss out the ghost box. And yes, you will toss the nunchuck out as if you were really throwing out the ghost box.

This version will see a lot of differences between the guns too. They’re mostly variations and won’t be too big of a difference. Some weapons, though, won’t appear at all like the tether line that lets you string objects together. 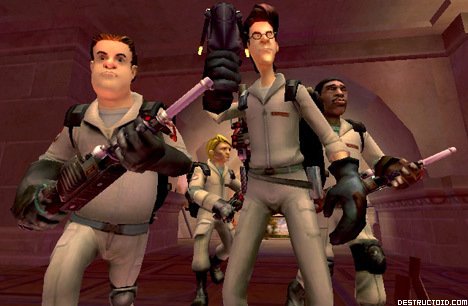 The Wii build was of the same level I just played on the Xbox 360 build so it was great seeing how exactly the games differ. We followed the old lady ghost through the library until we cornered her deep underground. Then we had the big fight with her and got sent to the different dimension.

Overall, I felt the controls were great but visually unappealing. The overly cartoony look just didn’t sit well with me. The Wii version feels like it was designed more so for kids, which this version of the game would be great for. Old men like Nick Chester that used to love the Ghostbusters will go with the Xbox 360 or PS3 versions while they let their kids give the Wii version a shot.

Ghostbusters is developed by Red Fly for the Wii, PS2 and DS, developed by Terminal Reality for the PlayStation 3, Xbox 360, PC, and published by Atari. It will be out sometime early 2009.