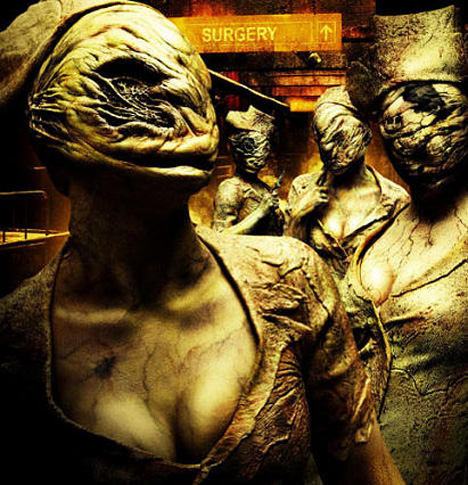 I like to be scared. I don’t mean quick leap out of my seat, unexpected knife being jabbed in my face, Scream 3 kinda scared. Those are cheap thrills, and while I’m never one to condone cheap anything, there’s another kind of scared I particularly like. I think of this specific genre as the WTF genre. Fine examples include Event Horizon (WTF is going on with this ship?) and Poltergeist (WTF is going on in my house?).

What does all this have to do with games? Well, since I am a rabid devotee of the genre, I am finding more and more that the best WTF horror stories on the market are happening in games instead of on the big screen. Series like Fatal Frame and Silent Hill have me playing in the dark and staring at my closet door with momentary unease. Even first person shooters have gotten into the mix, first with F.E.A.R. and even moreso with the upcoming Bioshock. It makes me truly consider that games could be the ideal medium for the best of the horror genre.

I think I was made a horror fan around age 8. I blame Ridley Scott for making superlative films like Alien. At that time, gaming was a lot more about simple, straightforward fun and getting a high score, and it accomplished that goal beautifully. In the meantime, the horror genre enjoyed its golden era with films like The Thing, The Shining, The Exorcist, and Hellraiser. There was little to no sign of horror in gaming on the horizon, and with such amazing offerings in theatres, there didn’t need to be.

In 1996, both PC and console gaming had major entries that put horror gaming on the map to stay: Diablo for the PC and Resident Evil for the Playstation. The term “Survival Horror” was born from the latter, and some players had clearly discovered a whole new way to experience fear — one that had nothing to do with the theatre experience whatsoever. As the quality of mainstream horror films lessened, the presence of horror in gaming continued to grow and branch off into its own subgenres.

In 1999 Silent Hill changed the scene of horror gaming yet again, creating a slight deviation from the genre Resident Evil had created. Although never specifically named, this is when WTF games were born. Eternal Darkness rocked the GameCube in 2002 with its clever “sanity meter” measuring your descent into the world of sweaty, hallcinogen laden madness. In the meantime, The Ring hit theatres, making the first major impact on American horror in some time and setting off a craze for Japanese cinema. It wasn’t long before this influence was showing up in games too.

The timeline is pointing strongly in one direction: horror games are outdoing horror films by a landslide in quality. What’s the reason? Perhaps games allow for more detail in the storyline (twenty gameplay hours sure beats two in the theatre for building an engaging story). It also helps that games do not require brand name talent to be taken notice of. Thankfully, we are not being forced to endure such high quality game titles as Texas Chainsaw Massacre: The Beginning.

Last but not least, horror games allow us to take a more personal role. Instead of watching the drama unfold, we become a part of it by interacting through a character’s point of view. Both Silent Hill and Resident Evil have inspired their own films, and while they aren’t quite winning statuettes just yet, its perfectly plausible that games may come to inspire and fuel the genre in a way it hasn’t been fired up in some time. It does beg the question though: Why aren’t the films able to generate the same powerful reactions the games did, even though they are telling very similar stories? What do the games have that films can’t seem to capture?