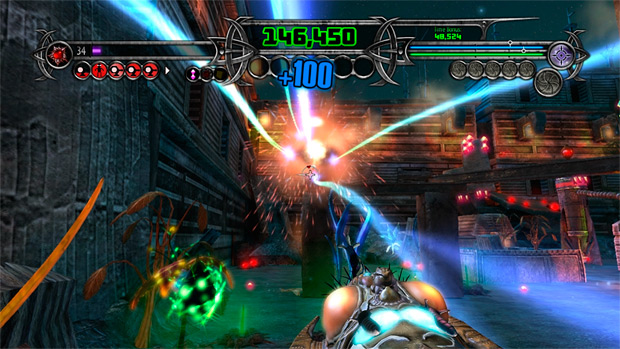 I honestly have no idea what is going on in these screenshots, but apparently Xotic is a new first-person shooter/arcade hybrid that’s about to hit Xbox Live Arcade this Summer.

It’s set in a bio-organic “exotic” environment with weird guns, where the goal is to get as high a score as possible to compete on leaderboards. Shooting some plants can apparently give you chain combos, you can pick up something called “Orb Essence” and you’ll have to balance these kinds of things for getting highscores.

XP will let you upgrade your skills and weapons, and power-ups will litter the levels for even more score-based FPS gameplay. It sounds like Bulletstorm score-based gameplay meets environment-oriented scoring meets weirdness, which is far from the worst thing to ever come to XBLA. I think I’ll wait until there is something like actual gameplay footage first.