In an unfortunate turn for UK fans of New York’s Anamanaguchi, the band was detained earlier this week at Glasgow airport. Why were they denied? Apparently, they were too good to be allowed into the country. Perhaps the Scots thought that Anamanaguchi would displace all of the domestic 8-bit rockers.  From the press release:

The immigration officer asked guitarist/programmer Peter Berkman for a phone number to call; he gave the number of Phil from the group Firebrand Boy, whose flat they were staying that night. The officer asked Phil two questions on the phone: “Are they getting paid for these shows?” to which Phil replied, “I don’t even know if I’ll break even, everything’s out of pocket.” And the second question, “Would you say they’re pretty good at what they do?” to which friend and fan Phil replied “yes.” The officer returned and told the band that since they were “pretty good at what they do” they had to be denied access to the UK.

[Read on for details.]

I came across a checklist on the UK work permit site (direct .pdf link here), which helps to explain the situation somewhat: 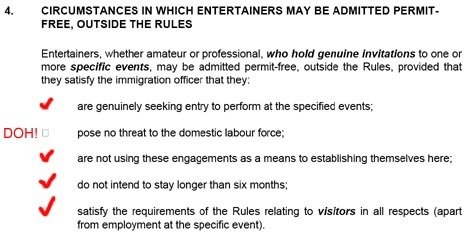 Anamanaguchi were indeed too good for their own good, so they had to offer up this apology:

We regret to say that we have to cancel the rest of our UK tour dates. We were denied access to the country for not having work permits. We were held in customs for about five hours, were detained in a windowless holding cell with Arabic newspapers, and were fingerprinted and photographed. After this, we were let out into the city of Glasgow on March 9th but were forced to return to leave on March 13th. We’ll certainly be back because the little we got to see was truly awesome and incredible. We are very, very sad that we had to cut it short and we did everything in our power to stop it from happening (we almost called Ringo Starr, no joke). Thanks to everyone that helped make this possible and hope to see you in the UK soon.