The Atelier franchise isn’t exactly well known in the States. Sure, with eleven titles out in Japan, six of which made it to our shores, you’d think the franchise would be super popular. And it is! At least in Japan…but over here it’s made only a niche presence on the market. C’est la vie, right?

Well that’s not stopping NIS from localizing the latest in the franchise, Atelier Rorona: The Alchemist of Arland. Coming to the PS3, this RPG based upon the foundation of doing alchemy is almost ready to launch this fall. Having spent some time with the title at last night’s NIS event, I came away with a pretty clear initial perception on who this game will appeal to, and it’s a good thing that NIS knows their niche stuff, because they might just need it for this one.

From this early on, it looks like Atelier Rorona: The Alchemist of Arland has a pretty bare bones plot. Heroine Roronia is a budding alchemist, having inherited a alchemy business from her lazy mentor. Unfortunately, the timing is just right for the owner to skate out, as the kingdom has determined that the shop should close. What follows is a business game. Roronina has to follow a series of alchemy tasks for the kingdom, followed by buying more stuff, interacting with the multitude of plot characters, juggling HP and time. It’s a lot to keep track of, but fans of the genre might find all of this interesting.

Perhaps the most game-like element is the battle system. Roronina needs to collect items for her alchemy recipes, and she can either buy them, or she can go out into the wilderness to collect stuff. Plant life isn’t such a problem, but when the animals show up, they put up a battle. It’s simple stuff, just turn-based actions, and while I suspect magic and and skills can be used, the build I was shown would crash whenever anyone tried to use them. But it’s functional. 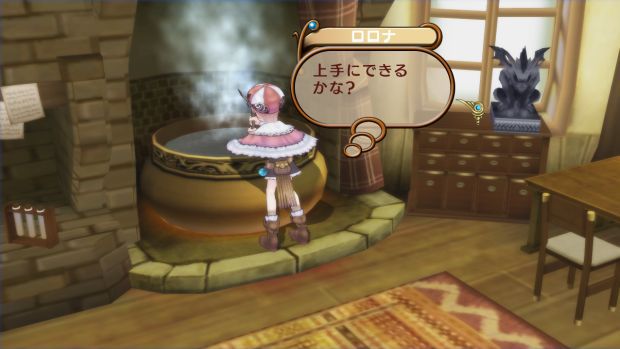 Early on, the plot looks pretty bare. Main character Roronina is  * gasp* a clumsy, charming girl who works hard and tries to please, and is surrounded by a group of people described as follows: a lazy master alchemist whose apathy toward business is countered by a mastery of craft (and a pair of glasses), a local knight whose gloomy disposition frightens the girls while setting their hearts a flutter, a borderline lesbian secretary who keeps Roronina around to fight off boredom, and a spoiled rich loli who is best friends with Roronina and caustic foil. There’s a whole lot more character-wise, but unfortunately, I’m afraid that Atelier Rorona is a title that falls back on wide-eyed anime tropes with shallow and bland characteristics. At least they are cute and follow molds people have come to expect.

Unfortunately, it’s hard to criticize the title too much at this stage. Fans of very Japanese titles will find a lot to like about this, with the multiple layers of customization, the item crafting, the traditional battles, and all that jazz. However, everyone else might just want to appreciate the pretty pictures and move on. Unless there is something really outstanding in late-game, it looks like this is a game for a very specific audience. Keep an eye out for this title in September.