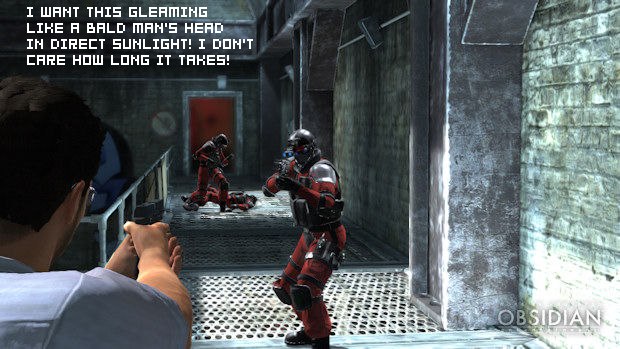 At E3 2008 I saw Alpha Protocol and was pretty intrigued, figuring I’d be seeing the game in action before 2009 was up at the very latest. Then E3 2009 came along and it didn’t really look like much had changed. We still couldn’t go hands-on with the thing. So the inevitable delay came, and it was a whopper. From an October release, the game got pushed back to Spring of 2010 and now, according to MTV Multiplayer, it’s been pushed back again to summer of 2010.

This time, however, Sega’s actually giving a reason for the delay. In fact, it’s giving reasons for both delays: positioning and polishing. Matthew Hickman, Assistant Producer at Sega gave the lowdown on the spy game’s delay:

We had a few reasons for doing it. One: We wanted to position it better, give it a lot of time. The main reason: We really wanted to polish the game up, make it everything Obsidian planned it to be, and give the consumer a very polished game.

We added a couple of other things. Tweaks in lighting here and there, added the inventory comparison screen so you can compare what you’re buying to what you have equipped. Just bringing the whole quality level up.

Possibly nine months of delay to polish a game? No, good sir, that does not sound right at all.