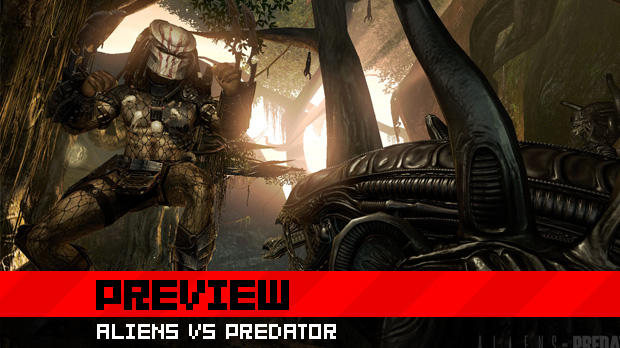 There is something to be said for the crossover. Bringing two previously separated universes together is entirely entertaining. It can be like a meeting between two lovers, or a car crash. One is good, one is bad, but you have to watch both. There lies part of the appeal of Aliens vs. Predator.

With a movie, comics, and lots of videogames, Aliens vs. Predator has its own fan base, and the original game was fairly well received. It’s almost time for that double dip, as a brand-new Aliens vs. Predator game is coming out in just a few weeks. Yeah, you’ve already heard plenty about it, but maybe not so much on what I’m here for: the multiplayer. It’s a little bit more robust than even I expected, so follow me down the path past the break into the battleground of Aliens vs. Predator.

Okay, I lied. Before we go to multiplayer, we need to discuss a little of the solo mode. Aliens vs. Predator‘s single-player, which I spent some time with, looks to offer three campaigns, each one representing the three species: Aliens, Predators, and, uh, Marines. The separate campaigns are good introductions to the play styles of the respective players, and they’re good for leading up to the multiplayer. I was able to go through the Alien’s story mode a bit, in which a captured female Alien called #6 is being tested upon. Of course, she’s going to escape and cause a problem for the unethical scientists around her.

Aliens have a funny way of playing. With no projectiles, they rely on running up and around ceilings and walls to sneak around maps. It’s great in the single-player, and even better in the multiplayer, as there are levels in which walls, bridges, and the floor will shift like in the Great Hall of Hogwarts…only much more violent. It’s all sorts of crazy, running up and over walls, sliding everywhere. There’s also a distracting hiss ability and a couple of melee attacks. With the ability to see in the dark, the Alien is probably the simplest class with some solid advantages, but is far from the easiest to use.

That title would probably have to go to the Marine. Those most accustomed to run-and-gun will be most comfortable with this soldier-type class, as the Alien has no projectile, and the Predator, well, I’ll get to him in a second. While I initially though that the Marine was going to be at a strong disadvantage to the other species, all classes have a handy block feature, and the guns make quick work of enemies. The Marine, along with the Predator, has healing options, and he’ll also be able to wield the six weapon types: pistol, shotgun, pulse rifle, flamethrower, scoped rifle, and my favorite, the smartgun. This baby will auto-track enemies, and ream the crap out of the wormy Aliens and fleshy Predators. Melee will work in a pinch, but is severely underpowered. Unfortunately, I was unable to check out his single-player.

Finally, the Predator offered a sort of mixture between the Alien and the Marine. Its single-player mode entailed the story of a freshly promoted Predator, although it seemed plenty powerful to me. The Predator is initially equipped with wrist blades, sharp weapons that will eff you up as badly as the Alien’s tail and claw. He’s also blessed with his trademark cloak, heat and motion vision, and healing abilities. Later, he can equip a plasma cutter with a red laser sight that will give away his location; a “combi stick,” which is basically a gnarly spear; proximity mines; and a smart disc that will bounce around levels. Oh, and he has a focus mode that allows him to lunge forward and hack at fellows, as well as leap across stages.

If he sounds…broken, don’t worry. After initial complaints that the Marines were underpowered at early demo events, there has been some major balancing, and with the open deathmatch, it was ultimately a Marine that won the day. Rebellion may have to send out balancing patches one day in the future, but all in all, I never felt like one class had an advantage over the rest. Other differences entail three separately designed HUDs, and with the XP earned over ranked matches, different character skins can be unlocked for multiplayer.

Many of the multiplayer matches will require you to play as one type or another, so they all have a general theme around them. Survivor is a co-op horde mode where up to four players will see how long they can survive against swarms of Aliens. Predator Hunt makes one player a Predator with a full arsenal of weapons, and everyone else is the Marine prey. For every Marine killed, the Predator character will gain a point, and when a Marine kills a Predator, they’ll switch roles.

Infestation is your basic zombie mode, this time with Aliens. Everyone except one is a Marine, and the Alien’s goal is to make a kill. For every kill, that player will convert them into an Alien. Points are allocated for kills, so if you die right away, it’s not a big deal. In this mode I was a little torn, as nothing happened for a while because the Alien player couldn’t make a solid kill. When that finally happened, it fell like dominoes, leaving me alone against a horde of Aliens writhing toward me. Certainly exciting and fast, but the initial warm-up time was dead dry.

So how does the game play? Fine, actually. I had a great time with it, and I found that the different roles were pretty fair. I never felt like I was cheated out of a kill. The matches are both slower than a normal shooter and faster: the Predator has a more thoughtful way of making a kill; the Alien can charge in from above; and the Marine can just shoot everything. The one-hit melee kills are great if you are the Alien or the Predator, but the assassination animation leaves you vulnerable. Stealth is super important, and a wise player can juggle everything, or at least recognize his opponent’s play styles. There’s a lot of balancing between actions.

I wasn’t really offended by the graphics of the game. Sure, it’s a fairly dark game, and it’s not the prettiest looking FPS, but I found the delightful one-hit kills made up for any bit of ugliness I could find. Those kills are oh so gory and oh so nice. But there was a weird bug I saw repeatedly where the Alien, upon dying, would writhe around in a bizarre, cracked-out version of a rag doll gone wrong. Funny the first time, surprising the second.

The levels are pretty varied, with one actually changing entirely as you play. It’s pretty neat, and coupled with a sound-alike doing the voice of the ever-dreamy Sigourney Weaver, subtle nods to the series’ past show up throughout the game.

In the end, I think fans of the whole Aliens vs. Predator crossover are going to get the most enjoyment out of this FPS. It has an interesting approach to delineating roles, and in my time with the game, everything seemed to come together fairly. DLC coming along should build on the initial 7 levels, and hopefully they can offer some new character skins. Aliens vs. Predator is a game I certainly had fun with, and fans of the series should definitely expect more. Look out for this game come February 16.