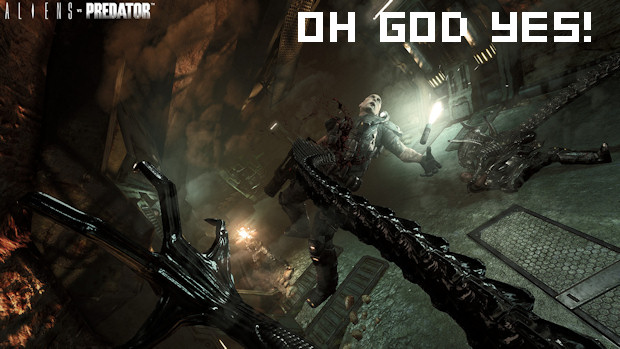 As promised, Sega has delivered a mass of Aliens vs. Predator hotness today, ranging from point-of-view screenshots and game info, to a brand new teaser trailer which you can watch after the jump. Let’s get right on to business.

AvP is set on Colony BG-386, where miners discover an ancient pyramid. As one could expect, all goes wrong when a “malevolent intelligence” awakens inside the pyramid and a tribe of Predators arrives on the scene to make sure that the structure’s acid-dribbling contents remain sealed away forever. It’s a simple story, but as we have already ascertained, you don’t need a complex plot. This is exactly what an AvP game should be like — some Aliens meet some Predators and they start kicking the crap out of each other.

As well as the obligatory three-way online multiplayer battles between the Marines, Aliens and Predators, each of the three species will also get their own single-player campaign. The story modes will interweave with each other, so hopefully we’ll get some really interesting gameplay going. Speaking of interesting, looking at the screens, we can see one Xenomorph jumping onto a downed Marine, while another seems to have landed successfully and has a victim to the ground. Could this hint at Left 4 Dead Hunter-style Alien pounces? God, I hope so!

How does that sound to you? None of it’s striking me as particularly new, but that doesn’t matter. Aliens vs. Predator should always be simple, and if you stick to the basic premise of “phallic-headed interspecies space rapists fighting vagina-mouthed hunting fanatics,” you can’t go far wrong. Fingers crossed that AvP is going to rock.

Hit the jump for the full details and a teaser video.

Game info:
Developed at Rebellion by the team responsible for the original 1999 classic, in the all-new Aliens vs. Predator players will have the chance to take the role of the three infamous species; the Colonial Marine, the Predator and the Alien. Each of the three species has its very own distinct story-driven single-player campaign mode that interweaves with the campaigns of the other two species. Aliens vs. Predator will also feature unique 3-way online multiplayer, allowing gamers to pit the three species against each other in the ultimate battle for survival and for the right to be crowned the deadliest species.

Aliens vs. Predator™ will be the first title to be launched in SEGA’s forthcoming series of Aliens games licensed by Twentieth Century Fox Licensing & Merchandising (Fox Licensing).

Story:
On planet BG-386 a colonist mining group discovers an ancient pyramid containing a dark and horrible secret. Across the stars a race of warriors is alerted to the discovery of their pyramid and a hunting party is dispatched to ensure that it remains sealed at all costs, whilst deep inside the ruined pyramid a malevolent intelligence awakes from centuries of dormancy.

The Marine’s story is an incredible fight against the odds, and the horrors lurking in the dark. Beset on all sides yet armed to the teeth, the Colonial Marine represents humanity’s last stand with the firepower to fight back.

As the Alien, players will discover what it’s like to be the most murderous and lethal creature in the universe, with the ability to traverse any surface with awesome agility in order to get close enough to unleash its deadly teeth and claws.

A master of the hunt, the Predator grants the player a suite of exotic weaponry and equipment with which to stalk its unknowing prey. Earn the greatest honour by ambushing prey up-close and butchering them for a gory trophy kill.