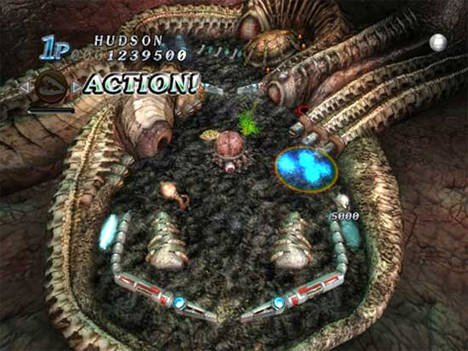 I love a good pinball game and, since hardly any pinball machines are manufactured any longer, sometimes I have to settle for a less physical experience. And, when I do, it’s almost always to play Alien Crush or its sequel, Demon Crush, on the Virtual Console. Now, Hudson has announced that they’re bringing the series back on WiiWare.

The new title, Alien Crush Returns, is expected to hit the Japanese WiiWare service later this month. No word yet on a release outside of Japan, but I’ll go on the record as saying, “DO WANT.”

Will it have waggle? You bet it will! Shaking the Wii remote will act as bumping the machine, allowing your ball to do more damage to the enemies it hits and helping to maintain control over it.

The boards in the Crush series have always been pretty intricate affairs, packed with monsters to kill, ramps to run around on and pinball-related minigames to play. And they’re planning to add more value to the game with new boards via DLC. Which hopefully means I won’t have to wait years and years to play a new pinball game.

Hudson has also suggested that special balls with varying effects will be available for use in the game. Balls that are more powerful the faster they are, balls that split in two, all sorts of balls. Which is cool and all, but they’ve also given the distinct impression that these are going to be microtransactional, which is less cool.

The question I have is, how much would you be willing to pay for new balls?