Welcome friends, to the fifth chapter of A Guide To Reconizing Your Gamers, your invaluable helper in spotting the many varied gamer sub-genera prevalent in today’s videogaming experience. As gaming has spread as an activity over the years, the types of people involved in it have become ever more varied and eclectic, with increasingly different tastes and circumstances bringing about a vast collection of approaches and attitudes towards the activity.

This guide will tell you everything you need to know in regards to recognizing tribal traits, understanding ways and customs, and interacting successfully, so hit the jump as we discuss two more citizens of the multifarious modern gaming world. Onwards! 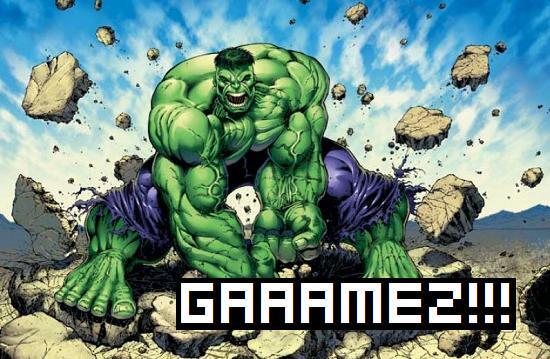 The aggressive gamer is the type people like Jack Thompson fear, misguidedly citing his in-game actions as the grim harbinger of humanity’s digital downfall. But really, JT and friends have no reason to worry. The aggressive gamer is often a playful sort at heart. wanting nothing more than to “blow stuff up goooood” while laughing gleefully at the OTT carnage he elicits.

Aggressive gamers learnt early on in life the important childhood lesson that while spending all afternoon carefully building a room-filling spaceship or mansion using every Lego brick available was certainly fun, it was really only the foreplay leading up to the anarchic joy of smashing the thing into tiny pieces once it had out-stayed its admiration period. Of course there was massive childhood kudos in creating a meandering, technicolor, four foot Battlestar Galactica with satellite dishes, umbrellas and those inconvenient long bricks sticking out of every side, but there was also no greater cathartic celebration of giggle-power than going Gojira on your creation. The aggressive gamer remembers this simple fun, and videogames allow him to play it out on a far greater scale, and without the threat of an angry mother making him tidy up afterwards.

Enemy troops, monsters of every shape and size, buildings, helicopters, space cruisers, tanks, even whole cities … They’re all available for a therapeutic pounding within the time it takes to boot up. From the very beginning, games have provided the safe, destructible playground he needs. He may have found Sim City a dull and pointless plod, but once he discovered those natural disaster options? Party time! It was Lego to the nth degree, the afternoon build extrapolated to a solid three days of clicking, making sure that the destructive payback nearly made him pass out with joy. And since then, things have only got better. 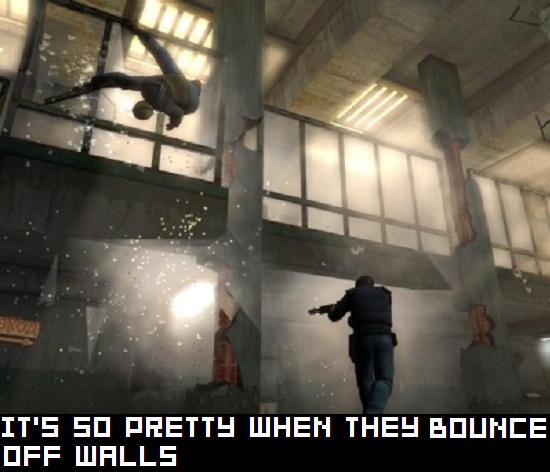 FPS Bullet-hole damage and breakable windows … Crashable cars with accelerated physics and damage modelling … Ragdoll physics and destructible environments … The development of games as a medium has been a non-stop rollercoaster that just keeps getting higher and faster.

Though there have of course been videogame developments which have confused the hell out of him. Stealth games? Was Kojima on meth? Of course, Metal Gear Solid seemed pretty good at the start. Military-trained agent protagonist? Check. One man against an army story? Check. Plethora of bullet-throwers and explosion-makers packing out the inventory? Check, check check! But then the game mechanics kicked in and something seemed very wrong indeed. Sneaking around and hiding for twenty hours, when he could finish the job in five minutes and leave a big smoking hole behind? Suddenly that Snake guy didn’t seem very well trained at all. Were all those guns just his military bling accessories? Nonsense. He was so disillusioned it took him a solid week of Black and sleeping with the Predator soundtrack on to recover.

But for all his love of watching things obliterated into the tiniest number of parts physically possible, you usually have nothing to fear from the aggressive gamer. At worst, he’ll have some anger management issues at the root of his media tastes, but if anything, his gaming and film predilections are nothing but simple stress relief and recreational therapy. Of course he’ll stand there making that corpse jump with bullets until he runs out of ammo, but it’s a healthier way to handle a bad day at work than throwing bricks at his ball-breaking boss’ car. A quick frag grenade to drop that annoyingly complete building on the evidence, and he’ll skip happily off to go about his business. Which may or may not involve watching Predator again. 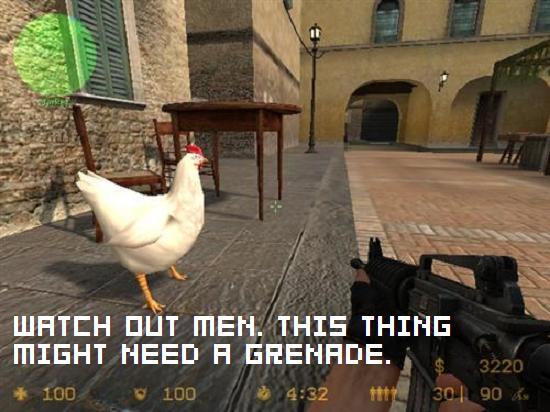 Obviously, the more destruction the better. He thoroughly appreciates advanced physics models, but for a very different reason to the technical gamer. The further things fly and the more surfaces they bounce off, the better. Modern FPS are always a good bet, and he appreciates serious shmups purely for the fact that an insane amount of enemies gives him a bigger target to hit. He might play Tekken for a while, but he often gets frustrated that he can never keep that post-KO juggle going for long enough. Earth Defense Force 2017 however, is always welcome, and The Incredible Hulk: Ultimate Destruction gives him a sense of contentment he hasn’t had since the womb.

Get some beers in, settle down, and enjoy the hilarity of the destruction festival. You’ll probably have a fine time. Just expect anything co-op to be a slow experience as you wait for every … single … thing in each area to be wiped off the screen before you can move on. 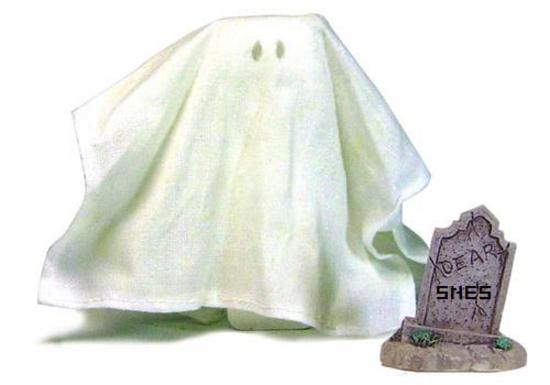 Suggested to me for inclusion by our fearless robot leader, the ghost is a particularly sad sight. A distant relation of the closet gamer, but at the opposite end of his gaming career, the ghost’s glory days are over, probably ending around the 16-bit era. If this had been by choice however, he wouldn’t be the shell of a man he now is.

Had he simply grown bored of games and moved onto something else, having thought the decision through properly, he’d be a happy and well-adjusted human being today. Horrendously misguided, some of us might say, but happy nontheless. Unfortunately though, the one common factor binding all ghosts together in broken, subdued awkwardness is the fact that they deeply regret whichever tragic events brought about their loss of gamerdom, but are so lost, they can’t find their way back.

Maybe he foolishly believed in the myth of growing up, and assumed that with adult responsibility came a need to stop having fun. After all, the public attitude towards gaming all those generations ago when he quit was very different to the one we enjoy today. The 20s-30s gamer was largely unheard of outside of journalism, and games were inaccurately percieved as a kids’ time-filler, a fad which would eventually pass by. If only he’d stuck at it and waited. If only … 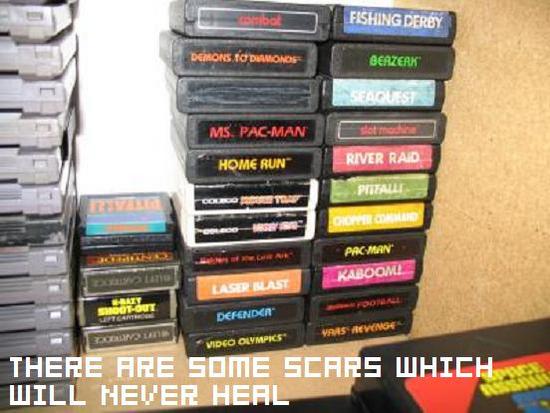 But it was not to be. Perhaps he was short of cash, or was getting married to a non-gamer who wouldn’t make the space for his collection of kit in the new home. Perhaps he was too embarrassed after years of being indoctrinated with false rules of adulthood that he never even told his future spouse of his passion, and decided to get rid of the evidence before she shunned him. For any of these or one of countless other misguided reasons, he sold his collection a long time ago. But despite conditioning himself to believe it was a good idea at the time, his past has started to call to him once again.

He thought he was okay. He thought he’d moved on, He”d denied who he was for years and thought he’d got away with it. But now, on a still night, the breeze seems to bring with it a lilting ethereal voice, tormenting him and reminding him of his lost loves.

“Frogger“, it whispers. “Maniac Mansion and Jet Set Willy. Alienaaaaate. You loved us and we loved you. Come baaack to us.”

But he cannot. He just cannot do it. 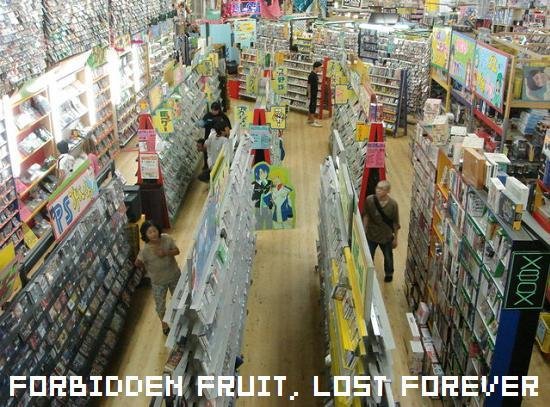 Terrified of reverting, it sticks out the torment as well as he can. The signs however, will always be visible. The instinctive turn of the head when he walks past a games shop, that he tries so hard to fight. The misty-eyed sadness on his face when his friends mention the games they’ve played recently. The awkward questioning as he tries to quietly eke out knowledge of current games, his embarrassment always making him hold back, like a child asking about sex for the first time.

To know him is to pity him. To pity him is to be frustrated by him. It could all have been so different if he’d just made a different decision all those years ago, but it’s hard to make him change after so many years of acceptance. At the end of a particularly maudlin night in a bar, he may occasionally recount you with the tragic story of how he lost his gaming, but by now, the poor, broken man just seems to have lost all will to get it back.

Be as sympathetic as possible. Try to imagine your feelings if you were in the same position and attempt to bring him out of himself gradually, being as empathetic as possible throughout the whole process. And if all else fails, during one of those maudlin drunken nights, try leaving a DS on the table and walking away for a very long time. Sometimes you’ve got to be cruel to be kind.