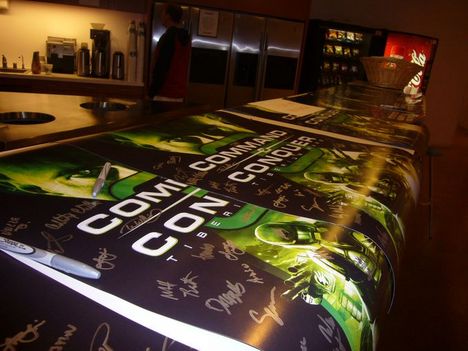 Yesterday, the guys from Epileptic Gaming were kind of enough to let me tag along with them as we spent about half the day at the Electronic Arts Los Angeles complex. Most of the time, I just tried to soak in as much of the atmosphere I could, gathering what little hints I might be able to pick up from the various halls and offices — take this for what you will, but they had a PlayStation 3 camera there and were very up-to-snuff on it. I would say more, but then I’d have a team of pixies rip my limbs off one by one.

EA kept everything fairly closed off, but when asked about Command & Conquer 3 for the PS3, I was met with a “no comment, wink and smile.” Speaking of C&C3, that’s why we were there in the first place — we got a special hands on and walkthrough with producers of the game.

If you haven’t had the chance to check out this RTS on the 360, then I suggest you do. The controls are surprisingly intuitive and Dj Wheat, who’s fairly uber on the PC version, was able to just fly through the menus and do essentially everything he could do on the PC, on the the 360.

Anyway, hope you like some of these pictures from the studio. It’s hard to see in these photos, but the posters for Medal of Honor were stunning. And sadly, no baby ducks were seen waddling about.

By the way, if you’re a big C&C3 fan for the PC, check out the big patch notes we were handed.