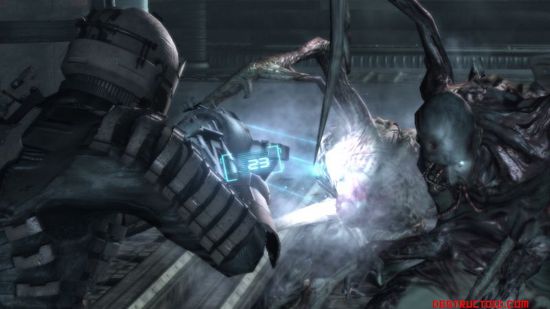 Here are 24 new screenshots from the upcoming survival horror game, Dead Space. Old Jimmy Bean brought word of the games premise a few months back. The game follows Isaac Clarke, a space engineer who gets stuck fighting off aliens that infect their hosts. So basically, imagine Resident Evil except it’s infectious aliens instead of the T-Virus … and it’s in space.

I kid though. Think of what I just said more as a complement for I love the Resident Evil series and have a special place for horror games in my black and cold heart. I am really looking forward to Dead Space. It seems like it will be a very refreshing change of pace for the survival horror genre.

Take a gander at the gallery below to get an idea of the combat system and the various aliens you will encounter. I especially love the above screenshot as it reveals that when you aim at an enemy, a digital ammunition counter is projected out from the gun.