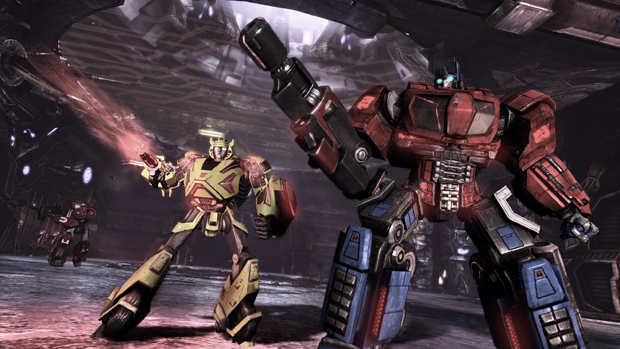 If you’ve read our single and multiplayer previews of Transformers: War for Cybertron, you should be well-versed in High Moon Studios’ work on the game by now. Regardless, you’re going to want to check out these factoids on the game.

Did you know that a special alphabet was created for the game from a couple of frames of animation in the original cartoon? Did you know that this game details Optimus Prime’s rise into power, from soldier to leader? These and more are in our list of Ten Things You Didn’t Know About Transformers: War for Cybertron.

1. It sets the official back story for Transformers

Hasbro was so behind the work that High Moon Studios did with the prequel-ish story of this game that they got behind it and have made it the official backstory for the franchise.  From here on out, they’ll be referencing the story created for this game to keep future Transformers work in line.

Hasbro was also so keen on High Moon’s reworking of the characters beloved Transformers that they’re making and releasing toys based on the studio’s in-game designs. What a compliment!

3. It’s in line with the original cartoon

Transformers: War for Cybertron was continually proof-checked with the first generation (G1) Transfomers cartoon. Style and continuity were drawn from the original television show that you and I grew up watching.

4. These are all new Transformer designs

As the story originates in the Transformers’ home world, High Moon redesigned the characters in a way that doesn’t factor in earthly influences. For example, Bumblebee still looks about as you’d expect, but he isn’t specifically built to look like a known earth car in vehicle form. Think of a concept car that sort of harkens back to a VW Bug and you’ll be on the right track for Bumblebee.

5. Starscream gets a back story

Starscream’s back story is explained in this game. You’ll find out specifically why Megatron keeps him as his right-hand man. In fact, at the end of the game’s first level you’ll see Starscream join the Decepticons as well as learn why he joins.

6. Optimus Prime gets a back story

Optimus Prime is not the leader yet when Transformers: War for Cybertron starts. His name is just Optimus at first, and he has yet to become the boss of the Autobots and he’s not particularly interested in being in charge yet. As the game progresses, you’ll see his growth into a proper leader.

7. A Cybertron alphabet was created for the game

High Moon Studios created a Cybertron alphabet and font for the game, and Hasbro happily signed off on it. Their source? They found one single frame in one episode of the Transformers cartoon that featured some glyph-like characters in a monument. The team used this to create a working font and faux language that is used in-game.

8. Cybertron itself is a transformer. Kind of.

As humans have never seen planet Cybertron, they may be surprised to see all of the transforming elements on the planet. Objects in the world transform around the Transformers to accommodate them. Doors sort of transform open. Bridges transform outward to cross valleys. Even object interaction has your character mechanically meshing to interface with things like switches and weapons.

9. You can transform as many times as you’d like

By clicking in the left analog stick you’re free to transform as many times as you’d like, whenever you’d like, in both single and multiplayer games. It happens fast, so don’t hold back. By transforming into a vehicle, you’ll gain access to abilities you didn’t have in robot form. Aside from the obvious mobility abilities, you’ll also be able to use different weapons and attacks. Some sections of the game encourage the use of specific modes, but none are required, and you can play this game how you’d like.

10. There are a lot of Transformers in this game…

…that we can’t tell you about. High Moon had artwork of many of the game’s characters posted all over their studio. We could plainly see them during our visit, but we were sworn to secrecy. Here’s the cast that we can reveal now. The rest will come soon: