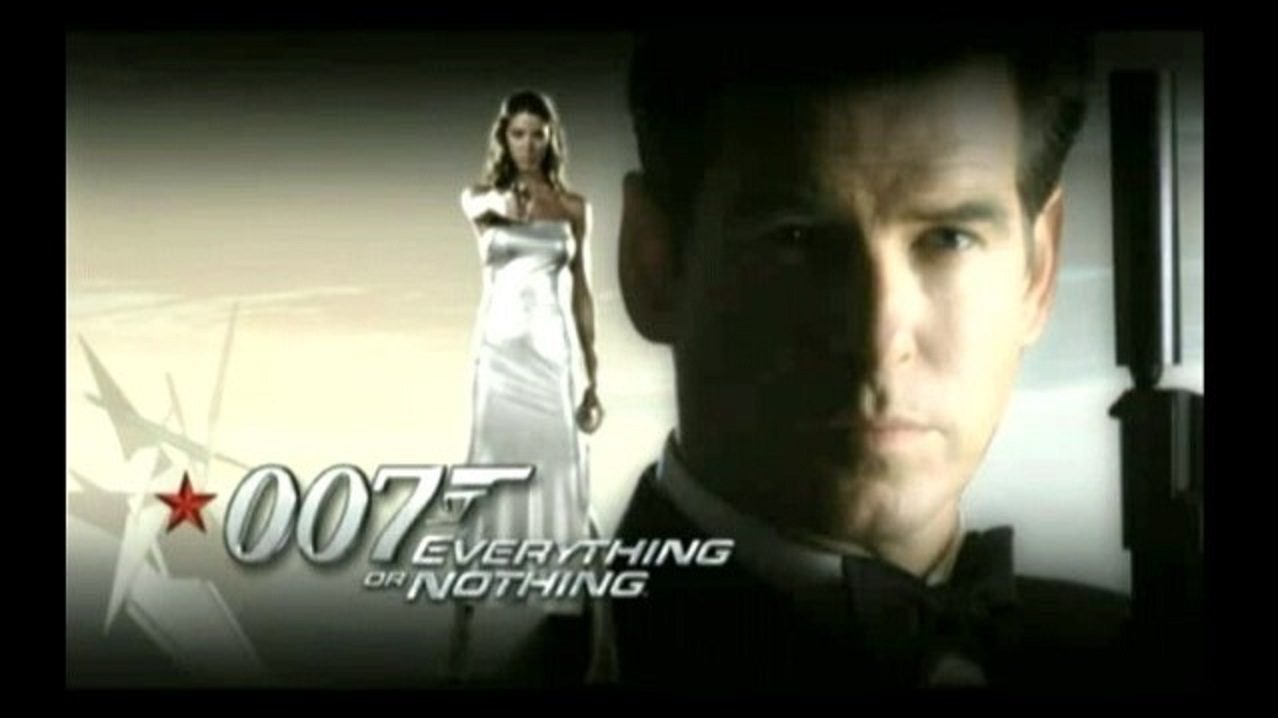 007 can never claim to be the most grounded series, even as it has recently tried to present a more complex and realistic approach. I remember watching 2015’s Spectre, and there’s this scene where the big bad is showing off his evil workforce. They’re sitting in rows at fancy computers, but the chairs they were given are basically barstools with no back support. I thought to myself, “you know what would be really evil? If he deliberately excluded chiropractic and massage therapy from their insurance benefits.”

Of course, I don’t think I’ve laughed so hard at a game trying to be bombastic as I had during the opening missions of 2004’s 007 Everything or Nothing. 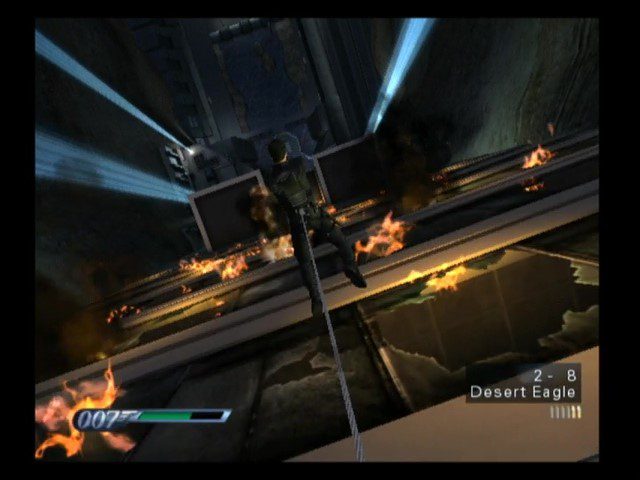 I don’t mean the cold opening that happens before you get the standard Bond song. No, that just involved James Bond trying to recover some nuclear device. Something to do with the Soviets, pretty routine.

It’s when 007 Everything or Nothing starts in earnest. M is like, “There’s this nanotechnology scientist who went missing, and we tracked her to this lab that’s on the top of a giant dam, go get her.” So Bond blows it up. Not just the lab, but the entire dam. Never mind the immense environmental impact that the destruction of a dam that size would bring — no, fuck that dam and fuck the country that it exists in. Who has even ever heard of a country called Egypt anyway?

Bond escapes from this exploding source of clean, renewable energy in his Porsche Cayenne, which seems like a far cry from the glamorous cars he normally drives, but maybe he needed something that he could pick up groceries with. 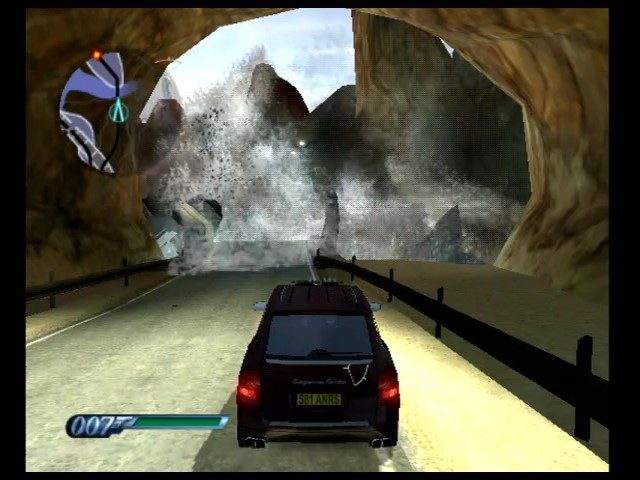 He then follows this train that runs on two sets of tracks. This seems excessive to me, but I thought I might be crazy, so I looked it up to see if such a train exists, and I couldn’t find anything. Trains are already pretty big. When the German army wanted to move giant artillery guns in World War 1, that’s what they used. Maybe they thought at one point that they could make an even bigger gun if they had another set of tracks, but when you already need a train to move it, that’s a pretty big gun.

In any case, Bond pursues in his fuel-efficient Porsche Cayenne, fleeing the exploding infrastructure into the Valley of Kings. That’s some impressive real estate right there. Not only did the government of Egypt let a bad dude build an evil lab on a prominent public works, it’s even within walking distance of one of their ancient monuments. They even let them build a double-tracked train right through them, that’s pretty generous.

So after destroying a bunch of priceless architecture, Bond climbs aboard this train by means of a convenient, car-sized tunnel between the tracks. He then has to stop the launch of missiles that I think we’re just hearing about now.

On the other end of the train, he encounters Jaws. Not that Jaws, the Richard Kiel Jaws. Honestly, having Bond fight a giant shark at that moment might be slightly more awesome. It would have made about as much sense, because, really, why is Jaws even here? He’s a henchman, sure, but he just happens to be on this train? Why wasn’t he guarding the dam?

Anyway, you dispatch Jaws, and I bet you can guess how: electricity. Even though he’s wearing what looks like insulated hip waders. You then find the scientist you’re supposed to save handcuffed to the train because… I don’t know, maybe she talked too much and the bad guy needed some space. But, oh no, he’s got the nano-machines and is getting away in a helicopter! Good thing this massive train is transporting a second helicopter and someone left the keys in the spare! 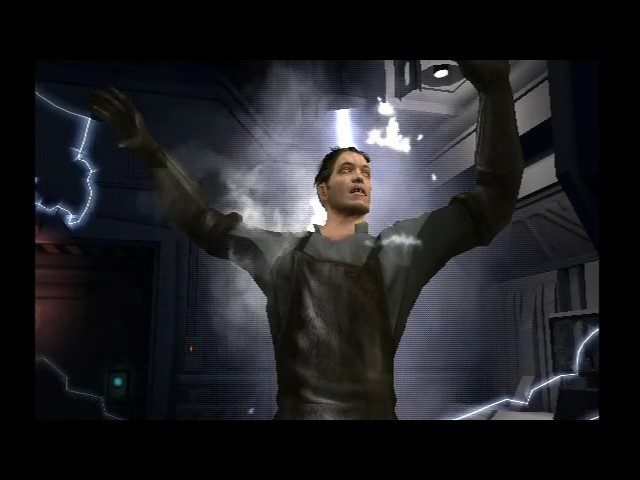 You then chase this guy’s helicopter once more through the Valley of Kings, except a more awesome, less touristy version with waterfalls. You chase him through some remarkably well-preserved tombs, blowing them up to ensure they have no value to the scientific community or the travel industry.

It’s a good thing Bond didn’t leave evidence of MI6’s involvement behind, like a Porsche Cayenne at the bottom of a ravine or something. It may cause an international incident if the Government of Egypt discovered that a British Secret Agent had been flinging missiles at their tourist attractions.

You eventually follow this general guy to a lake, where a big, alien-looking structure emerges and casts shield around the helicopter. There’s also a nice view of a pyramid I don’t recognize and what appear to be the distant Great Pyramids of Egypt. Impressive, since Cairo is hundreds of kilometers away from the Valley of Kings. Bond then has to blow up the shields, so he can blow up the pillar, so that will probably blow up the nano-machines. Mission accomplished. 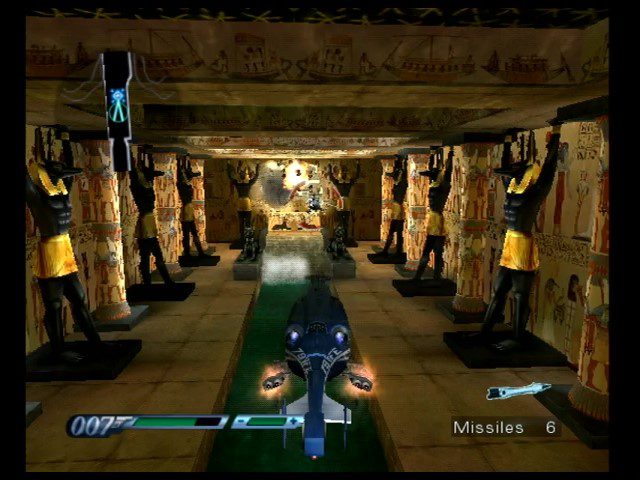 Bond then delivers the scientist lady back to her apartment, because I guess MI6 has absolutely no interest in questioning or protecting her. Too much burden on the taxpayer, I guess. And, I don’t know, giving a lady a ride home is the gentlemanly thing to do. It’s also an excuse for Bond to hit on the woman and her recently kidnapped ass to flirt right back. But, she needs a nap after all that being rescued and the two part ways.

But, oh no, it’s Willem Goddamned Dafoe, hiding in the shadows. This lady is in cahoots with him and she’s delivered him a vial of nano-bots (that she kept in her cleavage, naturally). Which, I mean, she made them, so why didn’t she just give them to Willem Dafoe in the first place? Why can’t she make more? Why did we wash away the Valley of Kings with a dam’s reservoir just so Bond would deliver her back to Willem Dafoe?

Just to make thing’s crazier, it turns out that Christopher Walken from A View to a Kill had trained Willem Dafoe to be evil. Since Bond killed Christopher Walken, now Dafoe wants revenge or something. What a bizarre way of establishing continuity. 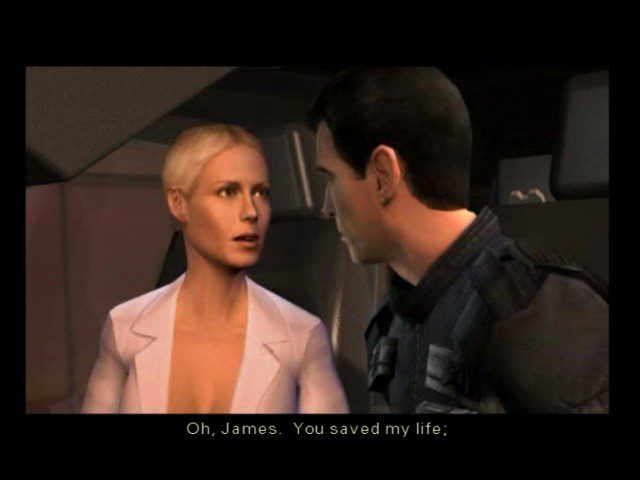 It’s not like 007 Everything or Nothing starts making more sense after this, anyway. The very next segment of the game begins with M telling Bond that he can’t kill any of the authorities. But then he picks up the newest Bond girl who tells him that the police are on Willem Dafoe’s payroll, and suddenly it’s okay to blow them up. Naturally, the government of Peru is just going to acknowledge that their police are corrupt and say it’s fine that a British Secret Agent tore through their ranks.

I’m not even saying 007 Everything or Nothing is a bad game. It was one of those post-Goldeneye 007 games where the press said, “Finally, a James Bond game that lives up to Goldeneye,” but then everyone forgot about it in a month. It at least tried something different, moving the perspective to third-person to make the action more cinematic. It’s supposed to make you feel like Bond. If they really wanted to make me feel like Bond, they should incorporate a sex mini-game, where if you do really well, the woman will turn on her boss, but if you fail to make her go, “Oh, Jaaaames~” at the end of it, she betrays you. Which, I guess is just kind of Alpha Protocol but with added quick-time events.

In terms of gameplay, can you really complain about something so absurdly bombastic? 007 Everything or Nothing is mostly just hilarious in the framework of a James Bond game. It’s so comically straight-faced about it. If this was a sequel to No One Lives Forever, it would be a genius sequence of events. But when you try to play it off like it has the narrative focus of an actual film, you’re just embarrassing yourself.