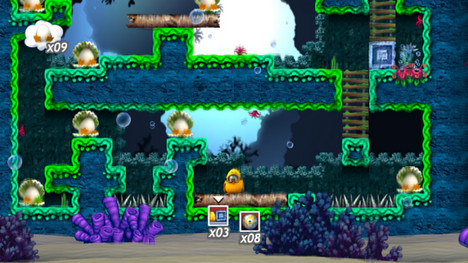 Speaking of good points, Toki Tori's presentation is very nice. Visually, there's nothing spectacular, but nothing needs to be. The graphics are crisp, colorful, and clean, with each world having its own visual theme. Aside from Toki and the enemies, there's not a lot of animation, but Toki has a lot of frames for his movements, and both he and the enemies move quite smoothly. The high point of the game is probably the music, with an appropriately bouncy main theme on the main screen and menu, and unique pieces for each of the four worlds that fits them nicely, the castle and underwater themes being highlights. As for controls, the game provides two options, either the remote and nunchuk or remote only. Using the remote only, movement is handled by pointing at a spot on the screen and pressing A, switching between tools by pressing left and right on the D-pad, and using items with the B trigger. I tend to play with the nunchuk, which leaves all the remote functions intact but allows you to move using the control stick, cycle through the tools by pressing C, and using them with Z. The only minor annoyances with the controls are a lack of Classic Controller/Gamecube controller support, and the need to point at the screen to handle menu choices.

My only real substantial criticism of Toki Tori is that it screams for a level editor and yet has none. A solid number of great levels are in the game, enough that I haven't yet finished it; however, I know the day will come when I'll crave more, with no way of satisfying my urge. I remain hopeful, though, as being a downloadable game the potential to patch in a level editor, for free or otherwise, is there, along with the possibility of downloadable levels. Should those dreams be dashed, I suppose that's what sequels are for. This one disappointment aside, Toki Tori is a wonderful game worthy of your 1000 Wii points (or 9000, for Europeans.) If you've already downloaded both Adventures of Lolo games on the Virtual Console and are suffering withdrawals while waiting for the third game to finally make an appearance, download posthaste. Those looking for unequivocally the best game on WiiWare right now, get it.

Screenshots courtesy of the official site, http://www.tokitori.com.
#Community    #reviews
Login to vote this up!