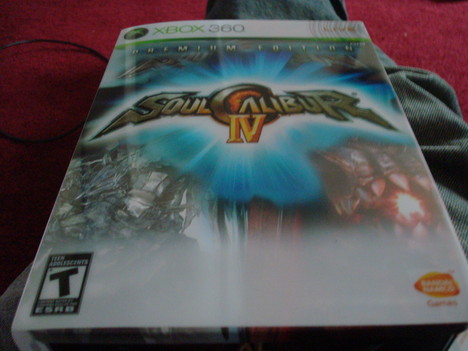 yea...5 points for when you load up the game as it welcomes you back to the stage of history. After giving my soul to this game for the whole day yesterday, I really love it. Save The Apprentice (who i'll go into later. -_-) this is much more balanced than SCIII and makes SCII look like wth? To make my day even better yesterday, I got my special edition copy for 33 bucks thanks to working at best buy and those bums having a system error or something. (apparently only the 360 special edition was discounted so much...PS3 version was not.) So no complaints there.

The gameplay hasn't changed so much. the Soul Gauge doesn't make/break the game as it somewhat plays homeage to Soul Blade with weapon breaking. Block too much and the little orb by your health will go from blue > green > flashing red. At this point, you can only block so many moves and if they break your guard (which happens just about each time you guard.) push all 4 buttons for the critical finish. Not hard to do but it's not like you'll be using it all the time anyway. They look smooth and in a sense, cheesy. The armor break is also a nice new gameplay feature. Such games that really made this bit famous is Fighting Vipers (at least that's where I first saw it being popular.). 3 different areas (top, bottom, lower.) consist of something flying off it hit too hard or too many times. Less armor on = higher damage taken. simply put.

Everyone's lookin smooth and pretty with the graphics....which hardly ever slow down (I only see any bit of it during one of Hilde's intros...and even then it's nothing that bit.) I have no problems with the music, which is done by Eminence. Actually hearing them at Otakon last year, I'm rather in love with them and they don't disappoint here either. I was never a big fan of the music in Soul Calibur 2, 3 picked it up and 4 is no different. Plus they even bothered to do a remix to Setsuka's theme from 3 and I love it.

Characters in general are a hit and miss. I love Hilde and Algol, for a final boss, is pretty yawn. I expected a Jinpachi out of him but he isn't all that hard to even fight. The bonus characters is what upsets me the most. As I love the anime chick designs done, they're really nothing more than Bonus characters. As they're just female palettes of Cervantes, Nightmare, Raphael, Astaroth, and someone else. If that's all we were getting, I would've taken Hwang and Li Long back...who I dearly miss. There's also a lack of the genereic "Mokujin" as from what I have so far, no character having everyone's moves. I really expected them to bring Edge Master back since he is storyline cannon. But whatever. Still happy for Hilde and the fact they actually beefed up Tira. I personally love Tira's new style of play and can't get enough of it.

Now the Apprentice gets his own freakin paragraph. Mainly for the fact the guy's pretty much broken tier. Too fast, those silly force powers, too fast, and too fast. Every time I play arcade, it takes me almost 10 mins to get past this idiot. The guy's a bit too good and for me that's a problem. Yoda on the other hand actually takes some learning...which is cool. But I was never for the Star Wars characters as bonuses to begin with so seeing Apprentice being so good makes me even more mad.

Overall, this is good enough to Rival Soul Calibur 1 in pretty much everything minus extra modes. The online is actually rather good granted you fight people with decent connections. Otherwise, anything besides 5-4 bars will lag or delay and you'll be basically taking a loss. The artwork stuff is back and more than enough to buy. Though I personally wish they'd bring back Extra survival. I enjoyed 1 hit kill matches in SCI to the point it'd be the only thing i'd play so much. This is more than enough worth a buy.