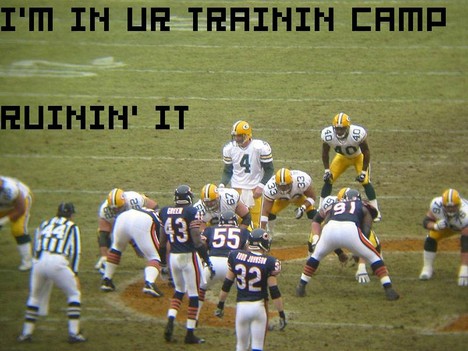 Well, I'm sitting here watching NFL network (I'm a huge fucking football junkie), and the Green Bay Packers are in a very tough situation now. Previous quarterback, Brett Favre (Who is also on the cover of Madden 09) has faxed a reinstatement letter, and it has been received by NFL head commissioner.

This leaves a difficult choice up to the Packers, who have repeatedly said that the team would become Aaron Rodgers' team, who has been the backup QB since coming into the NFL. Now with Favre back, it leaves a question. With him being worth $12.1 million, will they really spend that much to keep a guy on a bench, or will they trade him to another team?

You have to feel bad for Rodgers either way, as now he has to worry if he will even be first string this year. If he is, chances are Green Bay will for the first time ever, have to play against Favre in a different teams jersey.

(For people who are dumb as a rock, I'm posting this, as in Brad's post about what EA would do if he returned. I'm interested now. Anyone else interested in what's going down?)
#Community
Login to vote this up!