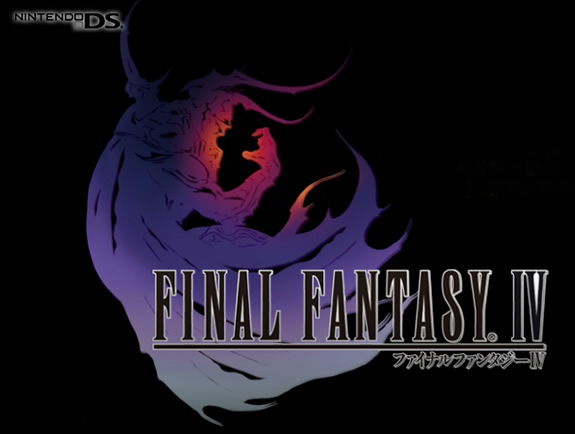 So yesterday aboot noon 'o clock I called my local [insert game store name here] and inquired about the fact that Final Fantasy IV was to be in stores today. Which is weird, it being the release date and everything, and I didn't think this would be one of those "must have at stores" titles. But apparently I was wrong, as I was informed of in no uncertain terms that yes, yes they did have it. And I don't know if it was the swagger I walked in with, or the fact I was wearing my scrubs still and had told them I'd be in immediately after work, but the customer service rep (a.k.a., whoever was working the counter) seemed to know that I had come in for my copy of the game. After deftly avoiding pre-ordering anything, and ducking swiftly out of the way of a "strategy guide" I made my pick-up, which was made all the easier by the fact I'd already paid for the game in full weeks prior.

Having my grubby little hands on my gorgeous copy of my game, I proceeded to return to my hovel, in which to spend the rest of my day lounging around playing. So after a few necessary chores I kicked back, turned on, tuned in, and dropped out.

I nearly teared up at the opening cinema. To see the game characters that had meant so much to me as a child fleshed out as fully realized CG characters had me so nostalgic for a minute I forget to even press start to get to the title screen. Not even mentioning the newly enhanced soundtrack, which sounded beautiful. I had to let the game go through with it's opening fully and let it sit on the title screen for a few seconds to enjoy the music for a bit more.

Then I moved on to the game proper, and let me say WOW they made this game pretty. My favorite part of the graphics presentation is the new fight scenes where for most battles the camera's pulled to the side, much like the presentation in the original, and for boss or important fights the camera is pulled back in a 3/4 isometric angle remaniscant of the original Breath of Fire. All your stats have been pulled down to the bottom screen, so that clears the top screen up for all the action. The characters you're playing look much like the characters out on the world map, but the enemies, GODS, the enemies are fantastic looking. I couldn't wait to get to the next area to see how the long remembered foes would look escaped from the confines of their two-dimensional prisons. And (besides the Mist Dragon, they made it too generic IMHO) I have yet to be disapointed in the reimaginings of the villians.

The newly done maps are nice too, as they've been upgraded to full 3d worlds to run around in, adding a nice sense of depth to the otherwise easy maps of first few dungeons of the game. They've added a map feature to ease the confusion of not being able to see more of the dungeon, and they've added a "treasure system" where if you complete a map you get stuff. Which is pretty cool, but gets frustrating when you 98% complete a map and have to run back around it to find the one spot where you didn't run far enough.

Like I said earlier, the music has been (for lack of a better word) reimagined, and most of it sounds much, much better. It doesn't cancel out the reminiscence factor, but for new players I think it goes better with the new style. All the original tracks have been updated, and I think they did a fabulous job on them. I'll always <3 the originals however.

I've only run into a few things that I dislike about the game to be honest. It's a little disorienting having to look down at the bottom screen to see stats and the action gages, and it's made no easier by the fact there is an enemy stat section below that, making it even more confusing to look at. Throw in the fact if you're playing on Active mode that you don't have time to spend poring over stats, and it just seems too complicated for it's own good. The next gripe is the voice acting. While I mentioned in an earlier cblog that they could've gotten the Spice Girls to voice all the characters and I'd have been happy, that was just sarcasm. It's not....bad...it's just not too terribly great. Cecil does kinda sound like a weiner, and Golbez sounds like Darth Vader with estrogen and asthma, but it's not all bad. Kain sounds great with his "Dark Knight" voice, and Rydia and Yang sound not so bad of themselves. The only main, main gripe I have with it so far is what the fuck is up with the thought bubble over Cecil in the menu screen? For cereal, it's really fucking with me.

Overall this is...well I'm going to hold off on calling it the definitive version of the game, but it is the shiniest version so far. There is just something amazing about seeing a game that you know backwards and forwards taken to a new level like this. I'm only up to Mysidia, and I can't wait to see what lies around the next bend.

tl;dr
I highly recommend this to long time fans of the game or new players who never had the chance to play this when it originally came out and can't "do" the old style version.
#Community    #DS
Login to vote this up!