I have heard great things about the SNES version of Alien 3, but have never played it (apart from one painful time on an emulator using a keyboard). The Megadrive version is a solid platform action game.

Instead of emulating the films lack of weapons, you start off with a machine gun, flame thrower, grenade launcher, and grenades. You have a radar in the top corner of the screen which shows where enemies are, but it relies on batteries to keep it powered up, so regularly fails which is cool. Most levels involve you as the shaven headed Ripley working your way around a maze type location in an effort to rescue captured Prisoners and get to the exit before the time runs out. Fail to rescue the Prisoners in time and you are treated to a cutscene of the remaining Prisoners having their chests bursting open. Nice.

The levels start off in the familiar prison of the film, later levels include living quarter areas, and industrial areas. The game is fun, but it does get really repetitive as nothing really ever changes. Some levels just require you to survive rather than rescue anything, and there is a few boss levels.

The sound effects and music are fantastic, I always remember watching a video which came free with a gaming magazine, and being real impressed with the video footage of the game.

I had never had any interest in watching The Warriors. I had seen the poster for the film before, and always thought it looked really bleak and unpleasant. I love Rockstar games though, I have a weakness for them, so as soon as I saw The Warriors game cheap I picked it up.

This is a really good use of a film licence. The game plays out partly like Manhunt, and partly like a 3d brawler. The fighting is solid, and quite satisfyingly violent. The vast majority of the game is original story, taking place before the events of the film, and is very engaging. The last 1/3 of the game is based on the events of the film, it has a far different feel to the earlier missions, but was engaging as well.

The game features a 2 player co-op mode, I guess that would have been cool, but I didn’t know anyone to try it out with. A bonus after completing the game is a Double Dragon clone scrolling beat em up which is real fun!

After finishing the game I was so impressed that I went out and brought The Warriors DVD. I was really disappointed the first time I saw it, as I was expecting it to follow exactly what happened in the film sections of the game, and it felt like bits were missing. Having watched it several times since then I have been able to see it on its own terms and loooove it.

I loved the film, and I liked the sequels. The game was a classic platformer closely following the events of the film. It looked real pretty, and had great music influenced by the films songs. There were many nods to Disney in the game, such as Sebastian the crab (from the Little Mermaid film) being chained up in the background during the dungeon level, and various Mickey Mouse ears appearing at random places in the background of levels.

The boss fights were terrible, each one was just boring as hell, and the game is very easy, but a great platformer none the less. 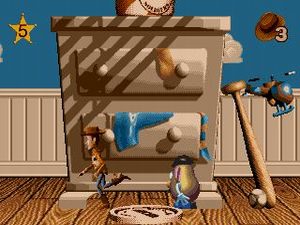 This was released later in the Megadrives life, and is a very good looking game for the system. The animation of everything is beautiful.

The game is mostly platform based, but there is lots of curve balls to ensure the game never gets boring. These include driving levels – both side scrolling, and into the screen, levels where your being chased, even a first person perspective level. Levels always have something unexpected in them. Whether it be suddenly getting your head set on fire leading to Woody becoming out of control, or spending a whole level disguised as a drinks container. Favourite game of all time. That is all that needs to be said…but really this is a great beat em up. The music, sound effects, level design, all amazing. Different endings depending on the difficulty, lots of nice little touches such as turning juggler clown enemies into normal clown enemies by making them drop their juggling tools.

And that is the conclusion of my list. In my opinion the best film licences of all time. Ones which just missed out on my list include Punisher (X-box), Gremlins (Acorn Electron) and Terminator (Megadrive)

Ones which would never ever be on my list even if they were the only film licence games ever made include Home Alone (Megadrive), Batman and Robin (Playstation) and Waynes World (SNES).