11:31 PM on 07.19.2008 (server time)    0
I’ve decided to bring back the Awesomely Underrated, but this time the rules are slightly different. This time I want to talk about games that caught my eye from all the E3 coverage that may not have received the attention they deserved. Since I haven’t played and thus have not completed any of these games, this is based completely on impressions I’ve read from this site along with others.
Without further ado, here are my picks of neat games that need more love, and thus are some of my picks from E3:

I first read about this game in Gamasutra and thought the idea was brilliant: play as a gamer trying to compete eight retro style video games. The games themselves are modeled after existing titles like Galaga and Dragon Quest. I’m sure most people born 1990 won’t be able to appreciate a game like this, but this is a retro fan’s wet dream. I also feel like the video game industry hasn’t tapped into the potential of parody enough, and it looks like this game could do it.

There you have it. These are some of the titles that look great to me, despite not being doted on by mainstream video game press. There are other games like Mega Man 9, Chrono Trigger DS and Mirror’s Edge that also caught my attention but have been getting pretty decent love from everyone else. Smaller titles have just as much creativity and deserve the same love as the bigger AAA titles.

What hidden gems did some of you see amidst the E3 coverage?
#Community    #E3
Login to vote this up!

My name is Naia (pronounced either Nay-a or Neye-a, like yay or like eye). I've been poking around here for a while, although I don't comment as much as I used to. I am I'm a starving artist in LA trying to keep my sanity. I do mostly freelance work and I'm always looking for people (even on DToid) to do fun projects with in entertainment. That can be either in theater, film, TV, or video games. I want to be like Kermit the Frog and be part of a group that entertains and makes people happy. I also love blue slimes, puppies and Sprinkles Cupcakes.

I've been playing computer and video games all my life. My dad was a programmer so we got an IBM 5150 PC very early on in the 80's. For Christmas in 1989 my parents surprised me with a Nintendo and it's been downhill ever since. I have/had most consoles over the years, mainly from Sony or Nintendo. I've had some Sega consoles and an Xbox 360 too.

I'm a big fan of the JRPG trinity of Final Fantasy, Dragon Quest and Fire Emblem (more DQ and FE lately, but I didn't hate FFXV). I was a finalist in Nintendo's DQ6 trivia contest back in 2011. I play RPGs, Action/Adventure, Platformers, Puzzles, and Point-n-Click Adventure games. I will play fighters and shooters, but they have to be the right kind of game.

Also, Rydia is my hero.

I'm such a nerd, I like to keep track of all the games I've completed in an excel file (it's almost 400). Now that my backlog is out of control I have a word document for that too. My goal is to for once and for all eliminate the backlog, or at least keep it to a number in the single digits.

I have a lot of things to say about the game industry, it's something I care deeply about and love giving my opinions. I like to rant about shit. I'm here just to share what I have to say, in hopes someone is willing to listen. 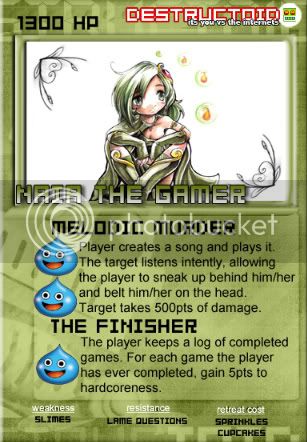 Thanks to The GHost for this awesome card!