12:54 PM on 07.16.2008 (server time)    0
If you're like me -- and there's no real reason not to be* -- you have an uncontrollable addiction to Google News. And like flowers blooming after a fresh spring rain, or mushrooms popping up from a fresh bovine deposit of fertilizer, conferences like E3 have a way of infiltrating the typically non-game news media.

Case in point: Sony's new price cut for the PS3!!! At least according to the casual journalists. Since Sony announced that the new PS3 would have the exact same functionality as the 40GB version, but with a larger hard drive, I would label this a hard drive upgrade rather than a price cut. 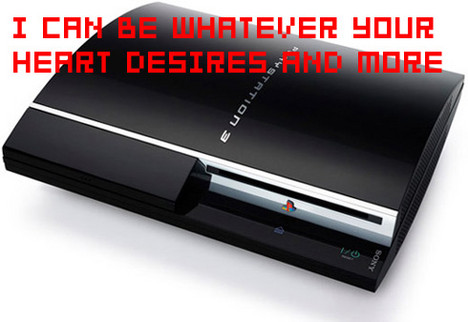 ZipZoomFly tells me the price difference between a 40GB 2.5" drive and a 80GB 2.5" drive is $11, so I'm not exactly in the throes of gratitude yet. Then again, the new system will include the DS3, which adds $5 of value, and WILL NOT include Spiderman 3 on Blu-ray, which adds at least $15 of value. Maybe $20.

So in the end, I declare the casual journalist to be the true winner of E3. After all, if politics has taught us anything, being right is all well and good, but being able to repeat something misleading over and over to an audience who really doesn't care to check it out is even better.


*except for the uncontrollable addiction to Google News, which can be treated with a prescription shampoo and a tiny comb.
#Community    #E3
Login to vote this up!