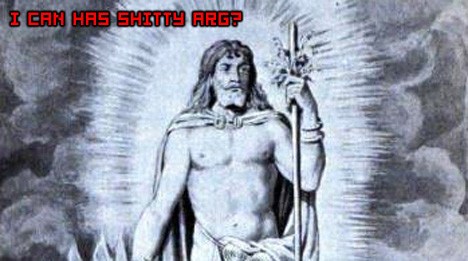 Okay, now back to the bad stuff.

It was Nick, I believe, that mentioned the confusing menu system. I kind of agree. It took me a few trips through the menu before I figured everything(?) out. It's a bit clumsy in places, and I would've hoped that they'd have streamline it a bit more, given the development time. It's not game-breaking, just sloppy. In fact, that perfectly describes the entirety of the demo: Playable, not terrible, but kind of sloppy and forgettable.

Now, let's talk about death. When you, or any of your squad mates die, a fairly cool-looking Valkyrie descends from above to take you/them to Valhalla. This is kind of cool, until you have to sit through it every single time you die. It's not a long wait, but one thing I like about games like Halo is the quickness of your respawn. You don't have to sit through a cutscene or a load screen before retrying. The game seems to try very hard to be epic and impressive, and this is a fine example of how it manages to fall on its pretentious face. I did, however, kind of enjoy the fact that, when you respawn, all your prior progress is left intact, including the status of your enemies. I.E. you respawn with full health, but they're still hurting from the damage you previously inflicted. It helps to keep down the repetition and boredom, of which there is much.

The only potentially game-breaking aspect of Too Human (or maybe just its demo?) is how generic and lackluster the whole thing seems. I wasn't particularly impressed with any aspect of the game. I think it was Mxyzptlk who said that it seems like a generic sci-fi action movie mixed with some Norse mythology. In fact, if I didn't know this game's history, I would assume it was just some no-name bargain title. Some of the character models look shoddy (particularly the females, save for a couple of the Purple Chicks), and the dialogue and voice acting tend to be extremely forgettable.

That said, I would have to give the demo a 7.0. I would probably buy this used or cheap, then sell or trade it after a playthrough or two. Maybe the full game is a bit better than the demo. I'll reserve final judgment, but I'm not holding my breath.
#Community    #Xbox360
Login to vote this up!