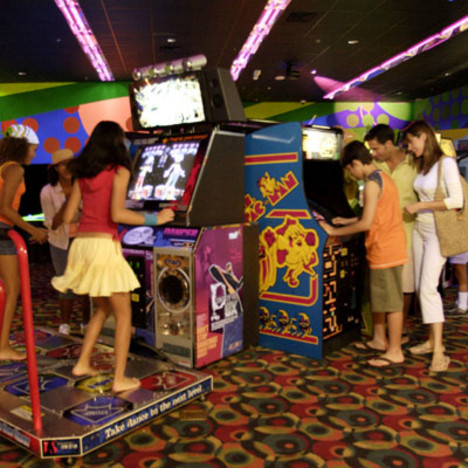 [I actually just wrote this up for that CNN Ireport thing. Of course you guys deserve more than enough to see this than kids who scream FFVII all day and can't type a sentence.]

Arcades were the big thing years ago. Really before my birth. (1987 if you must know.) Back then it was a great place to spend countless amounts of quarters into such games like Pac-man, Space Invaders, Galaga, Pong just to name a few. Back in the 90s, the arcades were not as big, but still booming. All things found from Street Fighter II, Mortal Kombat, Samurai Showdown, Cruisin USA, Tekken, Virtua Fighter, and Gauntlet Legends. But Speed up to 2008 and you'll see....well you'll see that majority of Arcades in America are pretty much done.

Why is this? Online gaming would be the prime suspect to eye at. People are either too lazy to go out and play or would rather stay in the house, pop in some random First person shooter and play with said friend across the state. It's not so much as gamers being lazy but the fact gaming now is no longer just a casual thing. It's big and still growing. Some would say good. Others bad. But in the end, the arcade is losing the war. Many, including myself, enjoy memories of playing games around other people who loved games. Pop in 25 cents to play said game and only to get mad that the joystick's broken on 1p side or a button is completely not working. Then you try another game only to see that it ate your quarter. Internet lag during a game or not connecting to the internet doesn't feel the same as this.

Arcades in America are basically dead outside of the west coast. It's hard to find a up and running one and a up and running one with the latest arcade releases. Want to play Tekken 6? Better have money and some change to hit up Canada or Texas. Street Fighter IV? Better off waiting for the consoles. Having arcades die out means it's also completely hard to find good competition for fighters. As many of the fighting game buffs will tell you Arcade cabinet > Online play. Being that a simple lag could mess up a combo or the timing of a block which could cost the match. Arcades do not know such law. If you don't block, it's either cause the joystick's broke, or you simply didn't input back.

I enjoy online gaming just as much as the next. But are next gen consoles making gaming easier or tougher for kids and alike to actually pry away from the home and hop outside....just to go to a friend's house and play the same said game in split screen? It's not the arcade no, but it at least means not to worry about internet hiccups. Sure there are arcades still kickin outside of the west coast. (Texas, New York, possibly Virginia.) but most of them are either on the verge of death or simply stopped caring. Though you can't blame games like DDR (Dance Dance Revolution for those who don't know.) for bringing the arcade spike back up. But even DDR can't save arcades now as most don't have them or probably can't afford it.

So what's our choices left? Move to the west coast or Japan? I'd go for both, but we all know majority of us gamers have no money for such. My local arcades are slowly leaving or simply not caring as much like say...2 years ago. I still find it amazing how in just 2005,arcades like in Springfield, VA, were always filled on weekends and summertime. Taking a trip down there months back with a friend, the DDR machine was completely free to hop back on after a play, no one crowding around Tekken 5: Dark Ressurection. Not even the usual or new people swapping turns on the Initial D racing machine. If it wasn't for the mall having work done to it, I'd think the arcade was about to close. Weeks after that arcade trip, I find out the local arcade in the St. Charles mall in Waldorf has closed down. It's sad that arcades were places to casually hang out, meet people and gamers alike, and a nice litle place to head after seeing a movie, die out with little retaliation.
#Community    #Retro
Login to vote this up!