On the Table: Gold Digger

While I adore video games, I'm equally fond of board and card games. On the Table is a weekly feature of my cBlog that examines some of these analog entertainments. If you have a suggestion for a game to appear in this column or suggestions on how to improve it, please let me know.

It's summertime. That means barbecue, picnics and family get-togethers. In that spirit, I offer you a game that is perfect to break out on just such an occasion.

Gold Digger is a game for two to five players. The objective is to finish the game with the largest quantity of gold by taking shares of gold mines. There are six mines differentiated by color. Players take turns by playing one of the two types of cards from their hands and drawing a replacement card from the deck. The game ends when all cards have been played. 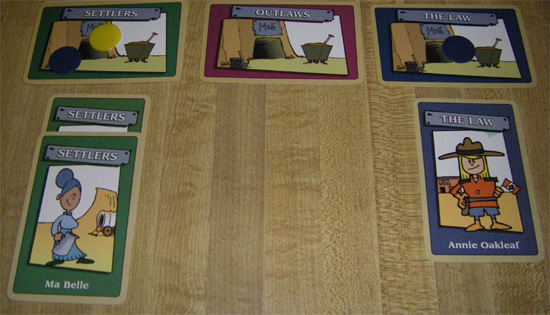 Character cards feature a personage (drawn by John Kovalic of Dork Tower fame) who is affiliated with one of the six groups that own a mine. They are played above the mine of their color. Once played, they allow a player the opportunity to stake a claim on that mine. This must be done on the turn in which they are played, however.

Gold cards add to the value of a mine. Each card will have between one and eight bags of gold on it. Gold cards are played beneath any mine. Some of the cards feature a grey bag and are "fool's gold" and add no value. Each mine can have up to five Gold cards played on it, which can make fool's gold useful to devalue mines that opponents have staked claims to. 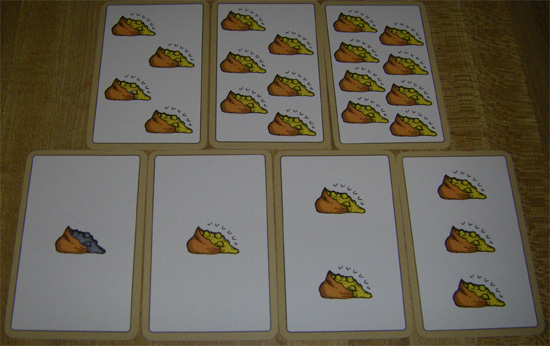 Each player may stake three claims to mines during the game. When the game ends, players will receive gold based on how valuable the mine is and the percentage of control they have over it. Moving too early could result in having a lot invested in a worthless mine by the end, while moving too late could leave you earning a smaller slice of a valuable mine. Of course, laying claims in a mine another player as a lot invested in to diminish the amount they earn is another strategy.

If you think Gold Digger looks a lot like a cartoonish Lost Cities, you're right. They were made by the same designer, Reiner Knizia. I probably prefer Gold Digger, as it is easier to play with more than two people. I also like the idea of sabotaging mines with fool's gold and that the point-scoring cards are generic while the cards used to claim mines are mine-specific.

Gold Digger is simple, brief and competitive. Easy to play and explain, it's ideal for younger children but still contains enough strategy to satisfy adult players. Its convenient size and minimal components make it an excellent choice to play anywhere you have a decent surface to play it on.

MOAR ON THE TABLE
#Community
Login to vote this up!