My top 10 game bosses of all time

7:59 AM on 07.04.2008 (server time)    0
Here is a list of my top 10 favourite game bosses. These are my personal favourites, not necessary the hardest, in fact many of them are damn easy, but the most memorable. The image qualities are dreadful, however I am at work, so had no time to look for better shots...

From Strider (Megadrive) – The Council

I was never a fan of Strider, that is apart from the fantastic first level which is near flawless in design. At the end of the first level you drop down into a Council Chamber, lots and lots of Councillers are seated in the background. Suddunly they all leap up and form into a giant centipede of men, the lead Counciller takes the head. Armed with a giant sickle the centipede monstrosity chases you around the room. You can walk on its back, as well as hang off it when it climbs up the walls. This was an unexpected and memorable boss.

The level leading up to this final boss is one long chase sequence. Elmira (I think that’s her name) chases you (as Buster Bunny). If she catches you, she hugs you to literal death.
After this great sequence you enter a room. The room contains a large blue robot. Montana Max (inside the robot) shouts at you before attacking. The robot shoots lasers, charges you, and fires off its hands. After a few hits the robots head blows up to reveal Max. A few more hits and it’s all over. The great thing about this fight is the music, its so mad cap and exciting. Every time you jump on Max’s head the robot collapses to its knees and Max gets a funny pained expression on his head. So yeah, cool boss.

From Streets of Rage 2 (Megadrive) – Barbon the Bartender

The second part of the first level takes place in a bar. At the end of the bar level, behind a counter is Barbon, he’s cleaning a glass. Seeing you, he turns and leaves the level. After dispatching an electric whip prossy you exit the level after him.
The boss fight takes place in the ally behind the bar. Rain hammers down in sheets. Barbon stands facing you, surrounded by his loyal cronies. As you walk towards him he shouts (in cool speech no less) “Come on!” and rips off his shirt. Such a great atmosphere leads up to this boss, and he does have some quite powerful sounding kicks.

From Splatterhouse 2 (Megadrive) – The big blobby many headed thing

After rescuing Jennifer from Hell and escaping the island via a speedboat (during which you fight a severely pissed off Octopus monster) You (as Rick) and your girlfriend walk towards some woods. The sky suddenly turns dark. Sensing trouble Rick turns to Jennifer and indicates her to wait. Walking forward alone the big blobby many headed thing appears. It floats around the screen spitting human heads, dog heads, and blobs of flesh at you. After some punishment it transforms into a speedy bat. Finally it turns to stone and crumbles to dust. This boss is so god damn hard! But a perfect end to a fantastic game totally full of great bosses.

After fighting the useless slow failed experiment the Tyrant in the Spencer Mansion you (as Jill or Chris) head towards the Mansions helicopter pad for rescue by Brad. Suddenly the Tyrant bursts out of the ground for round two. This time he is super fast, charging across at you with his massive clawed arm flailing. Seemingly invincible until Brad drops you a Rocket Launcher. The Rocket blasts him into pieces (shown by various different angles).
The great thing about this for me was how unexpected it was. My first play through I didn’t get this fight (due to not fulfilling the conditions) so on my second play through I totally expected just to get on the helicopter, and was more than shocked when this uber-bastard turned up : )

The perfect location for a fight – on top of a castle, at night, with thunder blasting away. Bowser appears in his flying clown ship, the Princess pops her head out the vehicle screaming for help. Then Bowser attacks… a great boss made memorable by the fantastic mode 7 as Bowser flies right into the screen from the background. I love the way that towards the end of the fight the Clown ship with the smiley face on it suddenly gets a really evil look on it’s face. A fantastic end to the fight as well, with Bowser spinning off into the background out of control (just like Darth Vader does in Star Wars). 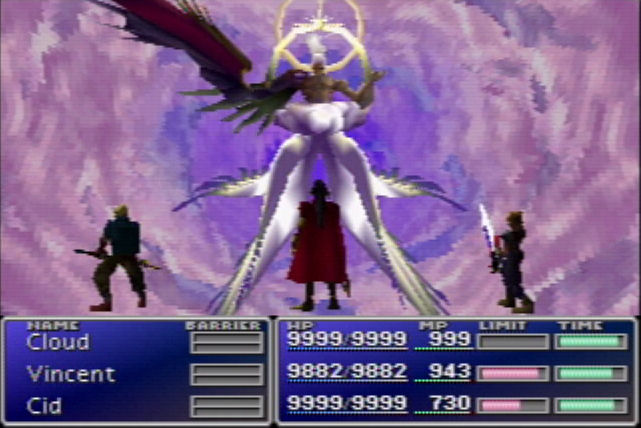 Sure, an obvious one, but I was really impressed by this boss. There aren’t many bosses who have their own song being sung by a choir. Sephiroth the great in his one winged angel form. I tried fighting him normally once, he had great attacks, such as sending giant planet destroying meteors against you (I think), but ever since that one fight I just use de-barrier, then Knights of the Round Summon with x4 damage and he’s finished. There is also the fantastic fight afterwards. Just Cloud vs a topless Sephiroth in the dark, fantastic!

In Rocket Knight Adventures Axel Gear is a ex-Rocket Knight turned evil. He is like the alter ego of the main character – the last Rocket Knight Sparkster. He turns up as a level boss during the game (a memorable fight with you and him both in robot suits) but it’s the mid-level fight with him that was the best boss fight of the game.

You have flown through space to the Pig Star, the base of the evil pig computer thingy. Halfway though the Pig Star you enter a large room which is pitch black. Suddenly the silhouette of Axel Gear leaps into the room. The lights come on and begins an epic one on one sword fight. After defeating him, Axel collapses.
Leaping up he uses his rocket pack to fly at full pelt into the wall of the room, doing so causes the wall to rip off, and the vacuum of space causes you to be sucked out the Pig Star. You manage to grab onto a bar, and begins the second part of the fight.
The great thing about this fight is that you are consistently fighting with the pull of the vacuum, so you have to fight while desperately clinging on to one of 3 different poles in the room. Axel flies around with his rocket pack, doing charges at you.
Once he is defeated the game turns black and white, the music stops, and in slow motion Axel is helplessly sucked out into space and never seen again. A beautiful sequence.

From Sonic the Hedgehog 2 (Megadrive) – Robotnik

You arrive at the Death Egg space station in pursuit of Robotnik. The level seems quiet, too quiet. Entering a room a window in the background opens to reveal a watching Robotnik while a robot sonic descends from the sky. As with Sonic 1 there are no rings on the final level, so one stupid move results in death.
After battling the cool metal sonic you enter a long corridor which Robotnik is legging down. Chasing him you enter a large chamber, the view from the background windows shows the planet Mobius, and is quite impressive. Robotnik leaps into a small pod, which rises up out the ground to reveal he is inside a giant Robotnik robot. The music is epic for this boss! Once defeated the robots arms and legs fall off, the body collapses to the ground as the whole Death Egg begins blowing up, you run down a passageway, and leap out into space, exciting stuff.

Another Streets of Rage boss, but this was the first memorable boss I thought of. In Mr X’s base you have ascended a lift to the top of his penthouse. Mr X sits on a throne in the background, watching you in apparent boredom as you dispatch his goons. Then with a wave of his hand he gets his bodyguard – Shiva to attack. Shiva has awesome boss music, and is very very hard. Each time he hits you Mr X lets out a big laugh. Finally with him dead Mr X stands up. Armed with a machine gun the final battle begins. The music as for all these boss battles mentioned is fantastic. Mr X looks powerful, and his gun is so cool. Running to one of the corners he will start firing bullets everywhere, not caring if he mows down his own henchmen. Finally after some punishment he is defeated. He gets sent flying through the air, spare machine gun bullets flying up everywhere. He lands with a massive thump, straight away he stands up, but the pain is too much, he collapses again, game won! Fantastic!
#Community
Login to vote this up!