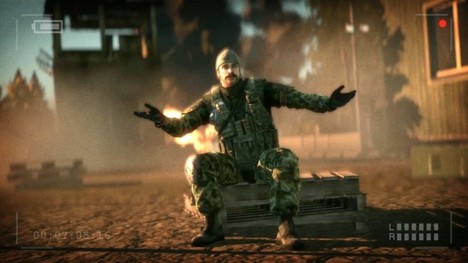 To be to the point, yes. The single player is a welcome refreshment to shooters today, with its less-than-serious story, and vivid colors. The story itself is very entertaining, but dragged out it feels. There are 7 missions, which seem to me could've felt much more regulated had they been split into 3 more.

While the levels are very long, they are also entertaining. The story itself, like I've said, is entertaining and refreshing. Continuing on that, I should refer you to the below advertisement.

Yeah, the entire single player campaign is that silly. Bad Company makes itself easy though, in one sense; you can respawn. I don't mean like how it is in most shooters where you start off at a checkpoint; any damage you do while you're alive stays done. any guys you kill, all that will stay done. Essentially, it's the Vita Chambers from BioShock all over again. Still a welcome change of pace in my opinion.

You read that right; one gametype. At least you don't have to argue over which gametype to play, I guess.

This is the one gametype in the game, Gold Rush. Essentially Attack & Defend, but still fun.
(Apparently, the old Conquest gametype will return after the summer for no charge.)
Try the demo for a taste of the MP.

Note: My bias really wants me to give this an 8.5. I love this game, but thats just me.
#Community
Login to vote this up!