On the Table: Kingsport Horror

While I adore video games, I'm equally fond of board and card games. On the Table is a weekly feature of my cBlog that examines some of these analog entertainments. If you have a suggestion for a game to appear in this column or suggestions on how to improve it, please let me know.

This week's post refers an expansion for a game previously covered in On the Table. You may wish to check out the post on Arkham Horror if you aren't already familiar with that game before continuing.

In May, I dedicated nearly an entire month to writing about a Lovecraftian board game, Arkham Horror. A long-awaited (and a bit delayed) expansion, Kingsport Horror, finally hit stores about a week into June, effectively ruining my plans include it in my coverage. I've had it for a few weeks now and it provides some much needed relief for players who have been browbeaten by an often painfully high difficulty while still managing to make it harder to win in spots.

Like Dunwich Horror before it, this expansion provides another new board that Investigators can visit with twelve new locations and two more Other Worlds. Unlike Dunwich, however, gates cannot open in Kingsport which makes things much more manageable. Not having to take a train to another town to close a gate is a godsend. At the same time, there is still plenty of reason for players to spend some time here.

For the first time in the game, there's a location that allows you to sell unwanted equipment and there are a few potent rewards which can be earned. Investigators can become "Captain of the White Ship", bestowing upon them the ability to travel freely to any location anywhere on the board, regardless of open gates or distance. Making the arduous journey to the Strange High House in the Mists, players can acquire a powerful seal to prevent a gate from ever opening in a location ever again, regardless of gate bursts or other effects that could remove it. 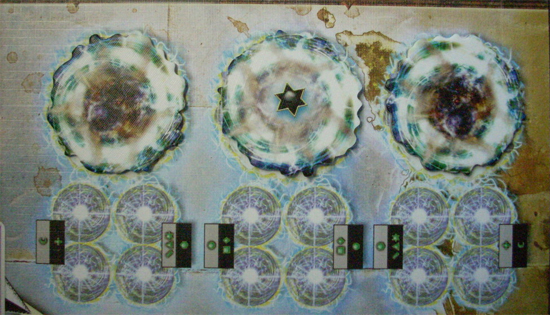 Another important reason to spend time Kingsport is a new game concept called "rifts". Each turn, there is a chance that extra-dimensional energy will begin to build in Kingsport and place a rift token on the board. Rift tokens display a location in Kingsport and the token can be removed when an investigator has had an encounter there. If these tokens aren't kept in check, they will eventually form a portal in Arkham that moves about, leaving monsters in its wake and advancing the arrival of the Ancient One. Thankfully, this can easily be kept from happening, so long as you can devote one Investigator to keep the rifts under control. 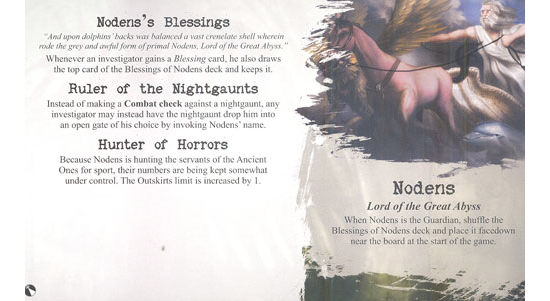 The town of Kingsport also plays home to some forces of good (I say "good", but I mean "at odds with the Ancient Ones"; nothing is "good" in Lovecraft). Counterbalancing the Heralds introduced in The King in Yellow which assist the Ancient One, Guardians provide benefits to the players. Some Guardians provide gifts on every turn while others, like the cat-goddess Bast, must have their favor earned by Investigators. In the games I've played with them, they never unbalance the game, rather they make it feel sporting again in the face of some of the greater threats.

Eight new Investigators are introduced in Kingsport Horror, and they rank among the most interesting to date. Included are an actress who can exchange her skills for new ones, a street urchin who starts the game with highly sought after relic and a politician who can convince allies who have left town to return to aid his cause. Most of them are really inventive and bend the rules of the game in clever ways.

Balancing out these very powerful Investigators and new benefits come some equally devastating Ancient Ones. These are absolutely some of the most difficult enemies released to date. Their abilities range from a constant stream of unavoidable damage when in combat with them to having the ability to grow in power when Investigators are devoured and even making every gate opening into a gate burst, making it incredibly difficult to keep pace with the game.

And, finally, Kingsport Horror introduces an element that can (and should) be used in any game of Arkham Horror regardless of whether you include this set or not. Typically, when you enter the final battle against an Ancient One, it's a pretty straightforward affair of dice rolling for five or ten minutes. The Epic Battle deck included in this expansion completely changes the rules of engagement.

Every round, a new card is drawn from the deck that will determine any advantages or disadvantages either side of the combat has. Investigators may get a bonus to their attack rolls or might not have any attack at all. Or, an Ancient One could gain an immunity from certain types of attacks temporarily. The system adds a whole new level of randomness that keeps it from feeling like mindless drudgery and I don't ever want to fight an Ancient One without it again. Each Ancient One has their own small deck of cards tailored specifically to them, which is added to a larger deck with more generic cards so that even after using Epic Battle rules for a while, it can still feel fresh and exciting.

It's hard to realize how hard the main game really is and how many ways the designers have shafted players until you see them give a helping hand for a change. Kingsport helps to level the playing field a bit more and provides characters with only average stats (instead of specializations) new life by giving them something anyone can contribute to the team regardless of skill levels. Epic Battle rules are excellent, well-balanced and will become an essential part of any game.

If you had to choose only one of the two major expansions to the game, I'm not sure how I could begin to convince you that either Dunwich or Kingsport were more worthy of your investment. Both add so much and with such a loving attention to detail and play balance that I can't really decide which I prefer. That said, if you're finding Arkham Horror to be too difficult, Kingsport Horror will at least make you feel like you have a fighting chance.
#Community
Login to vote this up!