Prey, is it the catalyst of good things in it's mediocrity?

1:41 AM on 06.18.2008 (server time)    0
When I got my 360, it came with an assortment of games I really would not have bought. Prey being one of them. But as it stood in my shelf, nagging in my pile of shame, I remembered reading it was kind of short and easy, so "What the hell", I thought, "let's give it a go". And tossed the thing in. Well, I really saw what I thought I would see - a whole load of generic design that hadn't aged well, but at the same time the whole way there were thoughts I could not get away from.

"This game blatantly rips off BioShock."

Wrench as the default melee weapon? 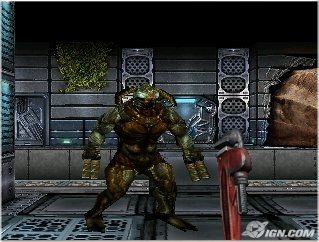 (What the hell were those about in Prey, anyways?)

Arcade machines and jukeboxes throughout the game?

Backstory as radio audio through the whole game?

An ally that lies to you (well, sort of)?

"This game also rips off Portal."

Portals that take you from place to place? Ambient female voice that you take on in the end?

All features that were hailed as most innovative and revolutionary in the later games. And they are all in Prey.

This would be fine and all, a lot of games try to emulate game mechanics of more successful games, but as you, the savvy game blog post reader, have already deducted - Prey came out almost two years before BioShock and Portal. This is where my mind started to wonder off while playing (also not in small part due to the game being super easy on default difficulty). But the direction the thoughts always took were along the lines of "This idea/mechanic was so much better in ..." So, is it possible that during the time in development Prey really inspired these creators we all know to be better storytellers, to take the mechanics present and treat Human Heads' game as a sort of free proof of concept, wrapped in really shallow story? The mind wonders.

And what also boggled my mind, was that who on Earth thought that Tommy was a good character that the gamer can relate to? He's a self-centered dick, and poorly written ("This shit is fucked up...no, THIS SHIT is FUCKED UP"). Who cares if he lives or dies. I don't think I've ever played a game where I hated the protagonist as much.

But all in all, the 6-7 hours I invested in this game, really were worth it, since I ended up feeling like I really got the insight into the mechanics that later became much greater games, the bare bones of the ideas and concepts that really were improved upon in infinite number of ways, and brought together with solid stories and much more original visual design. Now remember, this is no accusation, I love Portal and BioShock and know this might all be just in my head, but still, the similarities are just too great... or are the ideas just really generic, but were previously impossible to execute technologically?
#Community
Login to vote this up!

I also have a band called Leech, so check that out.
And I have a personal blog called PeZ Wants An Arcade, which serves as my portfolio and game stuff blog at the SAME TIME. So check that out, too.
And I love Retroforcego!