7:37 PM on 06.10.2008 (server time)    0
Alright, so it took me a little longer than I anticipated, but I finally finished GTAIV. My review will attempt to be as spoiler-free as possible, but I can’t promise anything. If something serious slips through I apologize now.

Also, before anyone gets up my ass about this, I honestly like the game. It’s one of the best I’ve played in the last few months. However, I do not think it is nearly as amazing as people make it out to be, nor do I even believe it deserves GOTY status, as so many people already claim. But, please read on knowing that fact up front, and yet retaining an open mind.

I can honestly say I disliked IV’s story. If you want my full breakdown, head over to Rev. Anthony’s “Deconstructing GTAIV’s Ending” article and check comment #74 (the spoilers fly in my response, as well as in said article). Otherwise, just know I felt as though the whole story gets kinda pulled out from under you, despite what Rev. says.

I also feel as though, while Niko may have had a “clear motivation” for his visit to Liberty City, I had a hard time relating to said motivation in the first place. When you get off the boat and the few missions thereafter there’s a lot of talk as to why Niko left the old country and how some guy did him harm and killed his friends blah blah blah. Yeah, well, since the player never experiences that tragedy, let alone finds out the whole true story behind the occurrence, I felt as though, while Niko may have had a reason to be doing what he was doing, I as the player did not. I really couldn’t relate to the dude if I didn’t know what the hell was bothering him, ya know?

This resulted in him feeling just as “faceless” as Claude (from GTAIII) to me. His character may have been better written than others in the series, but he still didn’t mean much to me, especially given the anti-climactic search that unfolds near the end.

I’m likely in a small minority here, but I really dislike the more serious/realistic tone GTA is apparently taking with this iteration of the series. As someone who has been in love with GTA’s art style since GTAIII, I can honestly say I was praying that IV would be cell shaded. Honestly.

I think Rockstar has some of the best artists working for them and I really wish the series would truly embrace the art style of the game covers/concept art (especially from San Andreas) and move into a more cartoony look. I know that’ll ruffle some feathers, but hear me out. 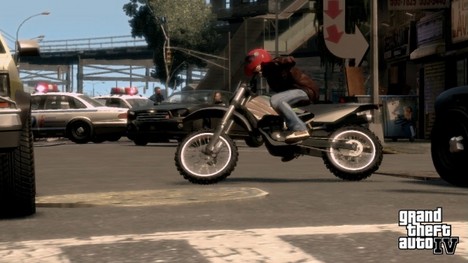 Ten bucks says the camera is going NUTS right now for the person playing this.

Any driving(-intensive) game that requires the use of both thumbsticks to adequately follow the vehicle around turns is not just a failure but an outright travesty. What’s worse is the camera is just as bad on foot, often trying to readjust itself the moment you move, which is actually the exact opposite of what’s usually intended/wanted. I’d like to be able to circle strafe someone or run one way and shoot another without the camera fighting me the whole time. You know, the way Saint’s Row did it. Zing.

As far as I can tell that’s all I really needed to get off of my chest after completing Rockstar’s epic achievement. Yes, again, despite all the negative things I mentioned, I somehow managed to like GTAIV. Sadly, it’s that I liked it in the old “wow, that was fun, I can’t wait ‘til they make a sequel to it because there’s so much that can and needs to be improved on” kind of way. So, yeah, if that leaves you with a bad taste in your mouth… join the club.

Here’s hoping the next one’s at least as good as the old ones! Thanks for reading. Leave your thoughts below, as usual.