The Start of the Affair: The Treasure of Tarmin

12:07 PM on 06.09.2008 (server time)    0
In the far-off mists of time, in a distant land known as the early 80's, a mighty beast strode the realm of home videogaming, crushing others beneath its feet. That beast, as you know, was the Atari 2600 (and its related kin). Often overlooked, however, was a stranger creature, one not as flashy or well-known, but that could still hold its own with the best of them. That mysterious beast was called the Intellevision, and in my childhood home, it was our one and only console.

The Intellivision may not have had some of the big-name games that the Atari had, and it may have had one of the strangest controllers to ever grace a console system, but it was ours, and I adored it. Countless hours were spent nested in my basement bean-bag chair, munching on Cheerios and playing pixilated baseball, dropping digital hamburger buns on equally digital angry hot dogs, or simply leaping from virtual lily-pad to virtual lily-pad, snapping up flies until night fell. And that is not even touching on the pure bliss that was Shark! Shark!, of which I have written much before and will likely write much again.

So, yes, the games were there, and I most certainly played them between bouts of watching GI Joe cartoons and playing with GI Joe figures, but there was one game that was different from the rest, and made me think about video games in a whole different way.

Dungeons and Dragons: The Treasure of Tarmin, was actually the second D&D game for the Intellivision. Now, as a mere child, I was not really familiar with the concept of D&D, nor that fact that even looking at the box cover would endanger my immortal soul, so I went into it with no preconceived notions. The actual connections to Dungeons & Dragons itself were pretty flimsy, and I suspect it was simply a licensing deal that worked out well for both parties involved. Tarmin was a dungeon crawl in the same vein as early Wizardry games for the PC, minus any sort of character customization or, you know, story. The player finds themselves on a lonely island, in a massive labyrinth stretching beneath an ancient castle. At the bottom of the labyrinth lay the glorious Treasure of Tarmin, guarded by the fiercesome Minotaur. Slay him and claim it as your own, and victory would be yours (as well as, assumedly, massive riches and scantily-clad elven ladies. That really wasn't covered in the manual).

The ironic thing is that it turns out the best treasure was actually up in the towers.

The game took place from a first-person perspective, looking down the dungeon hallways while the player's inventory was arrayed along the bottom of the screen. The entire adventure took place in the dungeon, making your way down hallways and through doors, looking for the ladder down to the next level. Depending on the difficulty you chose, the labyrinth could be as simple as a 4 level deep jaunt, or as in depth as a 20 level deep behemoth that stretched across the entire island. You start off armed with a simple wooden bow, ready to face whatever dangers the labyrinth may hold. And oh, what dangers it would hold. Monsters would appear at a distance of around 3 steps away, making terrifying, blippy noises. Some would never move, whereas others would come hunting after you. Giant ants, Giant scorpians, giant Giants; it was a veritable menagerie of big, mono-colored creatures. Combat was... let's call it "turn-based." You would select your weapon or item, use it, and if you were lucky, the creature would flash and make a noise, indicating a hit. The monster would then take its turn, roaring at you and attacking, which would usually kill you. At least, in my experiences, that's how it usually went. An important thing to note here is that everything in the labyrinth wanted to kill you. The monsters stalked you, chests would be trapped, and even doors would occasionally just up and fire a lightning bolt at you. This was not a maze for the unwary. When death came, which it almost always did, the game over scene was simple; a full view of the map of the labyrinth, with a simple flashing white gravestone indicating how far you made it. A lonely adventurer forever lost to the dangers of Tarmin. 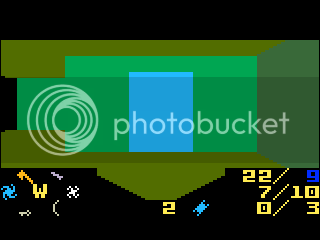 This door hates you more than your puny human mind can comprehend.

During the pleasant periods of not being slaughtered, exploring the dungeon would bring riches of discovery. Every weapon and item in the game had a different quality based on its color, with wood (brown) at the bottom, and platinum (white) at the top. And while it did seem odd that there were spellbooks out there made of platinum, you stopped caring about the details as soon as you found one. Treasure containers came in various sizes, from simple sacks of coins to large containers holding mighty weapons and armor. Games, especially on the higher difficulty levels, could go on for hours, which was quite unheard of to me at the time. My sister and dad and I would often play as a team, shouting out instructions to whomever had the controller about which direction to go, or whether to try and open that door that looked suspiciously like it was about to rain lightningy death upon us.

What Treasure of Tarmin really showed me, though, was that games could be worlds unto themselves. Lock 'N Chase was fun, but my sense of involvement with the little cop was limited. Tarmin managed to put me into a world different from my own, and let me and my imagination build the story around me every time I played. It was not a small bundle of pixels in that dungeon; it was me. I was finding silver bows, I was slaying angry spiders, I was the one nervously opening treasure chests deep in the bowels of the dark island. For a game that had no story, it still let me build stories in my own mind like no other game before it had done. Tarmin opened my eyes to the idea that games could be epic in their own way, that they could be more than just a fleeting distraction of glowing bits. 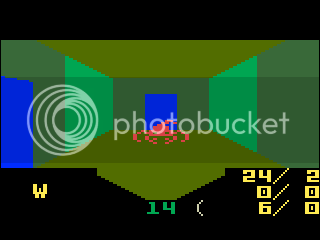 In the darkness of the hallway, Zargon spotted the giant scorpian waiting for him. Or maybe it was an octopus. It was really hard to tell, even for an adventurer as seasoned as he. Regardless, he grasped his platinum spellbook in his hand and made ready to face the foe, desparately hoping that the door next to him would not suddenly launch a fireball into his ass. Fucking evil doors.

My world of games expanded in the following years, with an Apple IIe introducing me to the world of Maniac Mansion and its kin, and then eventually a PC and a Nintendo, and the many new worlds that each of them brought as well, each in their own way. Treasure of Tarmin, however, was still the first to open my eyes to what could be, and they've been wide open ever since.
#Community
Login to vote this up!

Since the day my daddy handed me an Intellevision, I was set on the path of the gamer. I've got a special home for gamers with history that you can check out right now: Spectacle Rock