The Start of the Affair: Red and Blue gateway to an obsession

It was May 19th 1999 my 8th birthday. My Dad, uncle and I walked out of a local theater having just watched Star Wars Episode I :The Phantom Menace. Since, it was my birthday my parents had asked me what I wanted. I responded the newest and coolest thing in the world.....pokemon red and blue version. I had not heard of these two games until I started watching the cartoon. I'm not sure when I started but I do remember seeing a promo on Kids WB , thinking it looked stupid and would get canceled in no time at all. But somehow, I ended up watching it and falling madly in love with the world of pokemon. I still remember walking up to the store display table with the games divided in half between red and blue. I got both.

Red and Blue were the drop off point for me. I dove headlong into a colorful world of friendship and monsters and I loved every minute of it. I spent hours on end navigating the handheld world of Blue until I had triumph the elite four and captured mewtwo becoming a pokemon master. Just in time, Yellow was right around the corner. I perpetuated my stay in pokemon world through cards, VHS tapes and music, all pokemon all the time. But, this was normal in the late 90s, the nations youth had been enravished by the magical world of pokemon. But for me, My obsession with the fictional world would lead to something far greater.

Red and Blue were by no means my first video game, but rather my first obsession with a video game. Red and Blue can be seen as the foundation of which I lay my entire life now as a gamer. Most things in the world of gaming that I enjoy can find its roots in those two gameboy games. For instance my reading about upcoming games and about games through websites like Destructoid, all started with my scouring the internet as a young boy for any info on the next generation of games, Gold and Silver. My search would eventually lead me to IGN causing me to follow the website religiously for any and all updates about the two new games and by consequence learning about all other types of gaming news.

If coverage of Gold and Silver brought me into reading about gaming. The mysterious truck in Red, Blue and Yellow caused me to begin discussing video games on the internet. For those of you who do not know, in the original three games there is a truck hidden away on a dock. You cannot reach this truck without using a gameshark to learn the move surf earlier than intended. Once, you get to truck that's it. It's serves no purpose and is just there. My curiosity prompted me to try and uncover the mystery of this truck. I spent hours on gamefaqs trying to understand what these truck was for, was there really a special pokemon under there?, how do you activate him? Theories ran rampant through the forums and I stayed on top of them hoping I could finally discover what this truck was for. I did not know it at the time but my discussions on gamefaqs would be the start of my future participation on forums centralized on gaming.

Pokemon really was an isolated hobby it did not translate into other video games and cause me to want to venture outside the pokemon world. That is until super smash bros was released. I had become interested in smash bros. through the inclusion of pokemon and Mario characters. Mario had been my only other gaming series I was a fan of so the idea of battling my two favorites game characters seemed like a match made in heaven. In the same vein of gold and silver, I searched the internet for everything I could find about the games. Smash bros became so hyped in my mind that it became the first game that I ever felt a need to reserve to guarantee I would have a copy. Days went by as slow as possible as I counted down the days until the release of my dream game. Once Smash had finally come out , I played it every waking chance I could get. Getting all the levels, characters , beating all the break the targets and even starting a pikachu vs link rivalry with my uncle. Soon, I learned of all the fighters and their background. Link was from Zelda, Samus was a space bounty hunter and Kirby could copy people's ability. Since I had never gotten a chance to play these game, I learned all about them through smash bros.

I would eventually stop engrossing myself in pokemon. I stopped watching the show and stop buying the cards. But, I would never stop playing the game , although I did stop buying two or three of the same game and simply buy one per generation. Pokemon late reemerged in my life through my friends but I will tell that tale another time. Even though my pokemaniac life is over the effects are still being felt today. I am now more obsessed with gaming more than every before. So much so that I am trying to become a video games researcher so I can study how games affect us atleast, that's the dream. Pokemon may not be the greatest game or even my favorite. Yet, it holds a special place in my heart because ignited a passion for video games like none other.
#Community
Login to vote this up! 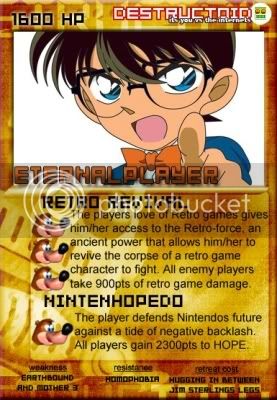