If You Love It, Change It - Imagine: Babyz

Imagine: Babyz for the Nintendo DS is a great game*, full of baby-type activities**, but even GOTY*** material can be improved on. For example, many of the DS hardware features could have been put to better use. 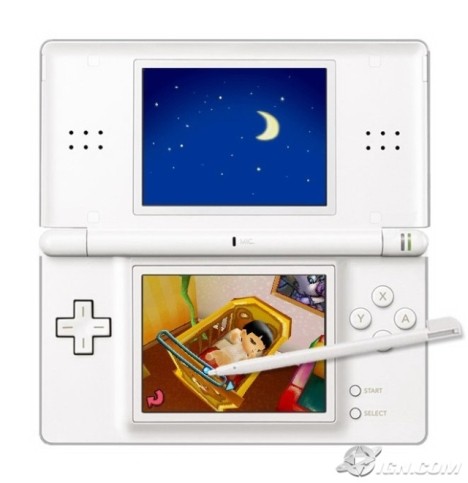 I said NO SLEEPING!!! Insolent whelp!!!

First, stylus controls. It's a little-known fact that the DS touch screen is pressure sensitive. So, just like in real life, you can discipline your infant with the appropriate amount of physical force. I'm not advocating child abuse, please don't get me wrong. But are you going to let that one-year-old talk back to you? Whatever you do, however, never shake a baby. The game doesn't have tilt functionality, so you just risk damaging your DS. Maybe in the sequel. 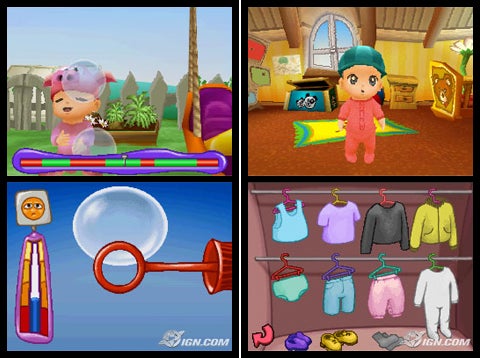 I hope you like bubbles, because it's the cheapest toy I could find

Second, microphone utilization. Right now, you use the microphone to blow virtual bubbles. Lame. You should be doing what everyone else with a baby and a voice is doing: yelling at your kid in the grocery store. You could also name your baby a la Nintendogs. And just real life, the more you say your child's name, the less responsive the child would be to it. "Morgan. Morgan. No. Morgan! Over here. Morgan. Morgan, honey. Listen to Mommy. Morgan! MORGAN! NO. PUT IT DOWN MORGAN."

"That baby is a little too chubby. I don't like fat people."

Third, wireless functionality. The great thing about having a baby is that everybody knows how to raise it better than you -- so why not give them the chance? You can invite up to 15 friends either locally or online, and they can use emoticons to express disapproval, superiority, disgust, reprobation, contempt, scorn, unease, and disdain in real time. They can also use voice chat to gossip to each other about the bad job you're doing, but don't worry -- you'll be able to hear it too!

These are but a handful of the ways that I think I can help make this franchise better. Ubisoft, I hope you're listening. As someone who has fathered many, many, children, yet has never stayed around long enough for them to be able to learn my name, I've probably got more experience with all sorts of babies (and their mamas) than anyone since Eazy-E.