Indiana Jones and the Call of Cthulhu

This weekend I, like many others, lived the American dream of sunshine, days off, BBQ and like any good child of the 80s, Indiana Jones and the Kingdom of the Crystal Skull. Frankly, you’d have to be suffering from brain damage or be an actual zombie to not be, at the very least, mildly excited for the return of “The Man in the Hat” – unless you’re Electro “I love the 80s” Lemon, who has never seen the originals, which is unpossible and criminal.

Unfortunately, my excitement and enjoyment of the new Indy flick was slightly crushed by the mildly absurd plot -- yes, I said “absurd” in regards to an Indiana Jones movie…how can this be?! – and a general “they pulled a Lucas” feel to things. Don’t get me wrong, I enjoyed a bunch of the movie and thought the stunt sequences were brilliant in not using CGI, but when they did use CGI it felt off and the end portion didn’t really do it for me. I don’t want to spoil anything, so I won’t say what it is exactly, but I know it’s the kind of stuff that never really grabbed my interest like a good biblical treasure hunt could.

While I’m not here to debate the flick, I needed to throw out my feelings because while watching the tale unfold, I thought about the kind of Indiana Jones movie I’d rather see. It’s my pleasure to bring to you, from my retardo mind, Indiana Jones and the Call of Cthulhu. 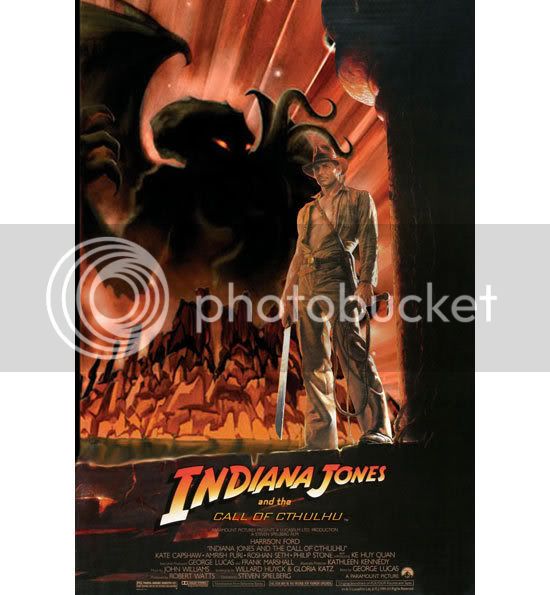 thanks to BlindsideDork for the epic shoop


Simple equation: Cthulhu + anything = AWESOMER. It worked for Sherlock Holmes, it could even work for Hostess snack cakes (mmmmm, Cthulhu Cakes) and it sure as hell would work for Indiana Jones. Oh, it would work so hard.

The story I see would involve the usual business of a friend/associate to Indy who goes missing while following a lead/search for a great mythical something. In this case the lead he’s following are the writings of Francis Wayland Thurston – writer of the manuscript which tells the story in H.P. Lovecraft’s “The Call of Cthulhu” -- the Cthulhu Cult, their desire to find the city under the sea, R’lyeh and awaken the being Cthulhu to lay waste to our world. To make it more “Indy-esque,” Hitler’s fascination with the occult could be the basis or, to bring it along and continue the timeline of Crystal Skull involve the Cold War and the Soviets like the story “A Colder War.” It’s less ridiculous than the plot to Crystal Skull…maybe not “less ridiculous” but definitely a better idea. That sound you hear is me playing Armchair Hollywood Executive.

All the adventure hopping would be there from sleepy New England towns, to libraries, to creepy cultish caves (alliteration owns you) and ending with a jaunt to the middle of the Pacific Ocean where the sunken city lies. Whether the actual city is shown or not is up in the air because it could drive everyone insane and we don’t need that. Last time Indy got loco, he tried to kill Spielberg’s wife and Data from The Goonies – uncool. Basically it’s taking all the best elements from the original trilogy and getting Tom Dickson to blend the crap out of it.

Seriously, I think this would be one of those movies that oozes so much geek, it needs to happen. Stay away from the CGI, keep it grounded like the original trilogy and, most importantly, DON’T LET GEORGE LUCAS PUT HIS HANDS ANYWHERE NEAR IT. Follow this and we’d have the most ridiculously awesome adventure flick EVER. Imagine what the LEGO property would be like. Who here wouldn’t snatch up the LEGO R’lyeh playset? Now if you’ll excuse me, I’m off to talk with some people about Cthulhu Cakes™ and fat money.
#Community
Login to vote this up!